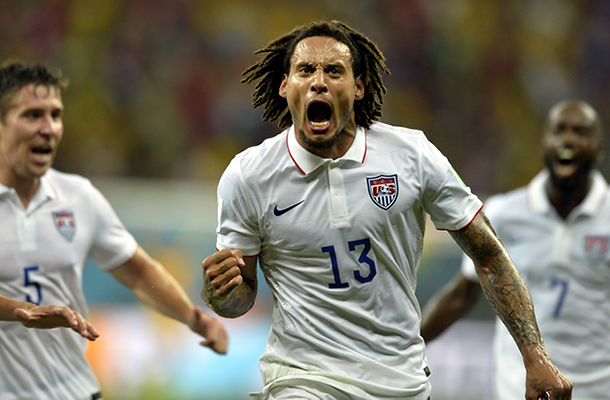 We’ve been hearing rumors circling around Jermaine Jones and his desires to play in MLS for what seems like forever now. In reality, Jones began his social media campaign after the end of the World Cup, letting the world know that he wished to join Major League Soccer. Well, it has finally happened. MLS and the New England Revolution announced that Jones, who was born in Frankfurt, Germany to an American Army soldier and spent some of his childhood in Chicago and Mississippi, will be joining the Eastern Conference squad for the next year and a half. Let’s examine the details.

First of all, this wasn’t your typical boy meets girl, boy likes girl, boy and girl get married scenario. The Revolution were not the only team interested in the 32-year old central mid fielder. Usually, when big time players come to MLS, they know which team they’re going to. In Jones’ case, both the Chicago Fire and the Revs showed interest, and could afford his salary. The deal almost fell apart because of MLS’s unwillingness to tell Jones where he would be playing, but, in order to appease both teams, MLS decided to do a “blind” draw to decide who would get Jones’ rights. It came down to basically a coin flip, and the Revs won the right to pay Jones $4.7 MM over the next year and a half. Huzah!

In Jones, the Revs get a strong presence in the central midfield, which they are desperate for. Jones is coming off a great showing in the World Cup, where he played tremendously in the tournament’s first two games. We all remember that ridiculous goal he had against Portugal, right? While his play declined a bit in the last two games, he still showed a lot of talent and strength on the pitch. This is something that the Revs, who are currently sixth in the eastern conference standings and on the outside looking in for a playoff spot (the top five teams make it through), really need. Jones might not turn them into MLS Cup contenders, but he could provide the boost they need to hop over the New York Red Bulls for that last spot.

Here’s what Jones had to say about the deal, according to the team’s press release:

“I’m very excited to come to MLS and join the Revolution. New England is an exciting team on the rise, and I believe I can come in and help the team make a push toward MLS Cup. Playing with the U.S. National Team has given me a great connection with the American fans and I’m looking forward to playing in front of them every weekend. I’m ready to get started with the Revs.”

I’m sure they are looking forward to him joining as well. I know it will be fun to watch him finally come stateside.