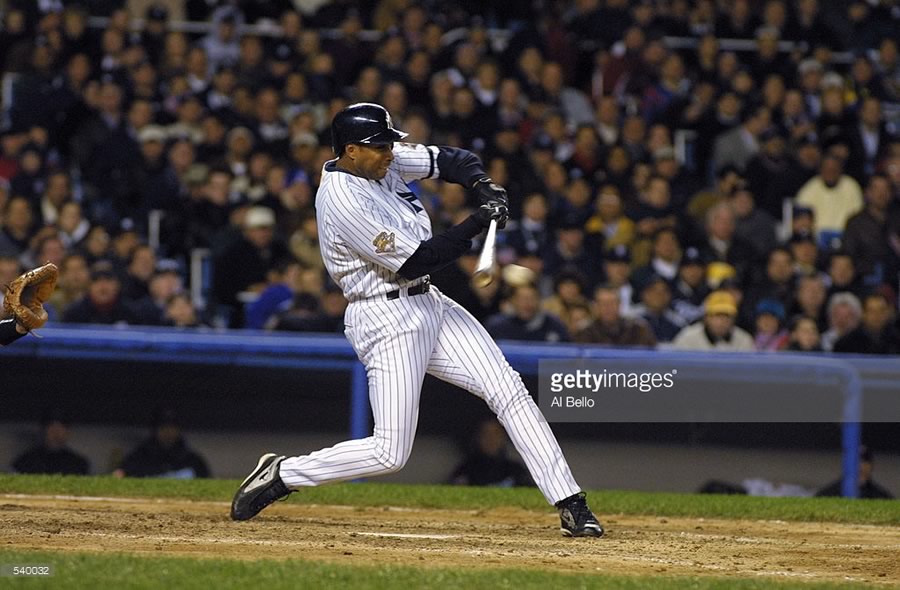 The Yankees announced earlier this week that Andy Pettitte, Jorge Posada and Bernie Williams, three players who were key cogs to the Yankees dynasty in the late 1990s (and 2000) will all have their numbers retired in pre-game ceremonies this season. When I first heard this news, I was kind of taken aback by the fact that Bernie was included. Don’t get me wrong, I love Bernie. Always did. But does he really deserve to have his number retired?

For one thing, nobody really seems to group him in with the other key guys in that dynasty. All we ever hear about is the Core Four™ of Derek Jeter, Andy Pettitte, Mariano Rivera and Jorge Posada. For some reason, Bernie just isn’t included in that group. Is it because he didn’t come up in 1995 like the other four guys? Is it because he retired a couple of years before they started dropping like flies? Whatever it is, it’s kind of ridiculous, because Bernie deserves to be recognized for the incredible career he had in pinstripes, and not just because he can shred on guitar. Let’s take a retrospective look at the Bernie years.

The Yankees signed Bernie as an international free agent out of Puerto Rico on his 17th birthday in 1985, and sent him stateside to the Gulf Coast Yankees for the 1986 season. He climbed slowly up the prospects rankings, as well as through the minors, until he was finally called up on July 7, 1991 against the Orioles. He went 1-for-3 with two RBI in that game, and stuck around for the rest of the season. The Yankees already had a pretty OK center fielder in Roberto Kelly, but they shifted the veteran to left field and eventually traded him to the Reds for Paul O’Neill just before the 1993 season. Bernie took over the regular center field job in 1993, but wouldn’t truly break out until a couple of years later.

I think a lot of my doubts about Bernie have to do with whether or not he stacks up against the other Yankees greats that have their numbers retired in Monument Park. I never really think of Bernie as being up there with the Mickey Mantles and Joe DiMaggios of the world, but I am definitely reconsidering after taking a deeper look at his stats. Bernie’s .297 career average is 15th all-time for the team. He’s sixth all-time in runs scored with 1,366, third all-time in doubles with 449, seventh all-time in home runs with 287, seventh all-time in runs batted in with 1,257 and fifth all-time in hits with 2,336. Nobody can deny the legitimacy of those numbers. For him to be a top ten guy in so many categories for the greatest franchise in the history of the sport is pretty damn impressive.

We haven’t even talked about his post-season numbers yet. Bernie is third all-time in post season games played with 121, which has helped him put up some pretty gaudy numbers. He’s second in runs scored with 83, second in hits with 128, second in total bases with 223, second in doubles with 29, second in home runs with 22 and first in runs batted in with 80. He’s basically behind only Jeter in all of these (except for homers, in which he trails Manny Ramirez‘s 29), which is pretty good company to be keeping. You can argue that he played in the post season every year, and so he had more chances to succeed, but you still have to hit the ball. Plenty of guys wilt in the playoffs, but not Bernie. He always rose to the occasion, including his walk-off winners in Game 1 of the 1996 ALCS against the Orioles (below), and Game 1 of the 1999 ALCS against the Red Sox. That’s why the Yankees won four World Series with him in center field.

Bernie’s career didn’t have the best ending, which I think has tarnished his legacy a bit. Like most other ballplayers, his skills declined as he aged, and he and the Yankees parted ways after the 2006 season. There was a bit of controversy because the Yankees didn’t want to guarantee him a roster spot for 2007, and Bernie simply walked away at the age of 37. He had a decent last season with the team, slashing .281/.332/.428 with 12 home runs, but it was clear that it was his time to go. I think he could have found some place else to play for a year or two, but I’m glad he didn’t. Number 51 belonged in pinstripes, and now it belongs only to Bernie. Congratulations, old friend.

What do you guys think about Bernie having his number retired? Answer in the comments below, or just share your favorite memories of Bernie Williams.