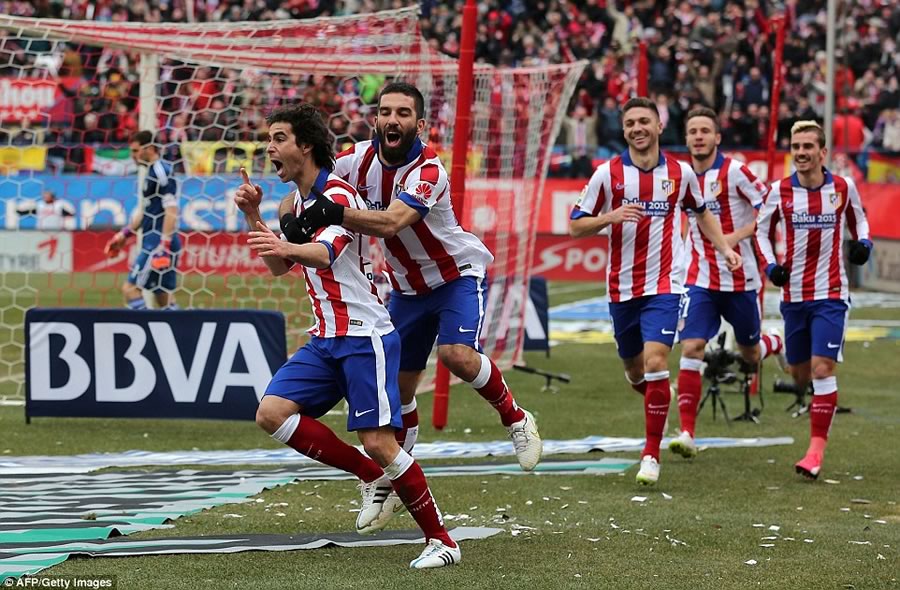 [dropcap]I[/dropcap] know I haven’t covered La Liga much so far this winter, but I couldn’t help but discuss this past Saturday’s Madrid Derby. Why is that you ask? Because Ronaldo and his Real Madrid boys were taken to task, suffering a crushing 4-0 “road” loss to their bitter crosstown rivals, Atlético Madrid. It was Real’s worst loss in loss in five years, and a clear sign that defending La Liga champion Atlético might have something to say as to how this season pans out. Here’s how it all went down.

I would be remiss if I didn’t mention that Real was down three of it’s starting defenders in this game. Center Backs Pepe and Sergio Ramos are both injured, while Marcelo was serving a suspension (probably for being the worst). On offense, they were also missing James Rodríguez, who is out with a bum foot. All that being said, when you can still field Cristiano Ronaldo, Karim Benzema, Gareth Bale, Isco, Toni Kroos and Sami Khedira, you should probably never lose 4-0.

Atlético’s Tiago (pictured celebrating above) got the scoring started in the 14th with a low shot that 400 year old Real Keeper Iker Casillas couldn’t hold onto. Frankly, he should have made the save. That being said, it’s impressive that he hasn’t pooped his pants and lost his teeth on the field yet, so kudos to him for still getting out there. The second goal came just four minutes later, when Saúl, who had come in as a sub for the injured Koke in the 10th minute, bicycled home a nice setup mass from Guilherme Siqueira. Casillas had no idea what to do, and might have actually pooped his pants and lost his teeth on this one. Sources have not confirmed or denied that at this point in time.

Saul hammers home the second goal. Note the devastation on the face of Casillas.

The second half went much like the first, as Atlético’s defense kept the clamps on Ronaldo and his golden balls, refusing to let the best player in the world – and everyone else, for that matter – do anything meaningful with the football. Antoine Griezmann would add the third goal in the 67th minute after Casillas the depleted Real defense were unable to do anything on a cross by Arda Turan, a header back across the net from Saúl and Griezmann’s strike from the top corner. Mario Mandžukić headed home a cross from Fernando Torres for the fourth and final goal in the 89th minute, and the pounding was official.

The big win continues the run of good results that Atlético has had over Real over the last couple of seasons. Atlético hasn’t lost to Real in La Liga play since the 2012-2013 season, and has only lost once in all other competitions since then as well (unfortunatley, that was last year’s Champions League final). Real still rules the overall derby, however, with 106 wins to Atlético’s 53 (49 draws too). It was a big win for Atlético, who would have fallen 10 points behind Real with a loss, but now in third place, just 3 point behind Barcelona (who beat Athletic Bilbao 5-2 on Sunday) and 4 behind their in-city enemies.

All of a sudden, this has become a clear three team race and, with 16 weeks to go, any of the three clubs could end up with the league title. Despite my newfound, Luis Suárez inspired, Barcelona love, I’ve always liked Atlético and would be happy if either team took the La Liga title from Real again. I’m looking forward to seeing how it all shakes out.

Check out all the highlights: