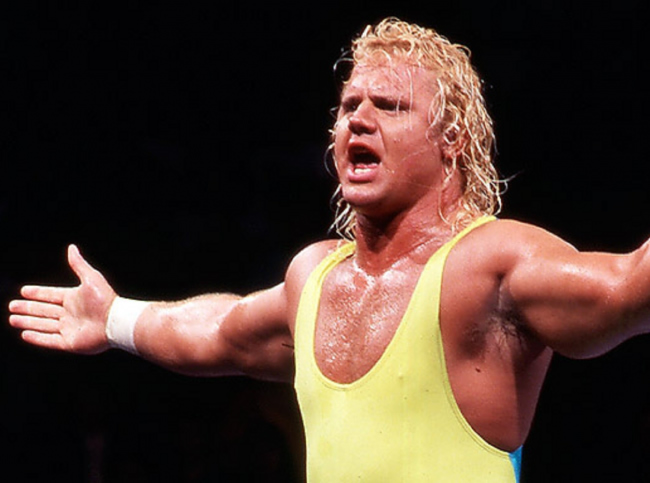 I’ve been on a bit of an Old School WWE kick lately, as I’m sure you’ve noticed from my posts about Jake “The Snake” Roberts and “Ravishing” Rick Rude. It looks like our wrestling retrospectives have turned themselves into a series, doesn’t it? Our subject today is another wrestler from my youth, “Mr. Perfect” Curt Hennig.

Curtis Hennig was born on March 28, 1958 in Robbinsdale, Minnesota. His father was, of course, legendary AWA, NWA and WWWF (the precursor to WWF/WWE) wrestler Larry “The Axe” Hennig, so it was safe to assume Curt might follow in his dad’s footsteps to become a professional wrestler too. He did just that, making his professional debut in the AWA in 1980 as “Cool” Curt Hennig a, and signing with the WWF two years later. He wouldn’t stick in WWF then, however, and he returned to the AWA in 1984, which is where he really became a star.

In May of 1987, Hennig became the AWA Heavyweight Champion. I know that wrestling results are predetermined; but, for the most part (let’s ignore the WCW David Arquette reign), it’s still an honor to be named World Champion; specially back in the 80s, when wrestling was still portrayed as a legitimate sport. In order to become champion, you had to be the best in the business, or the most popular with the fans. It took a lot of hard work and dedication to be even considered for a championship. Hennig held that AWA title for 53 weeks. Because he was heading back to the greener pastures of the WWF, he dropped the belt to Jerry “The King” Lawler on his way out the AWA door.

This is when I first heard of Curt Hennig. Because of the way the wrestling business used to be, guys tended to only be known in their regions, or “territories” as they were known back then. Vince McMahon basically single handedly did away with the territorial system, buying out his competitors and stealing the biggest stars from those companies that wouldn’t sell. McMahon took the WWF national (and eventually global) in the mid-to late 80s. This probably deserves its own post as some point, so let’s get back to Hennig’s role in the WWE.

In the fall of 1988, video vignettes began airing on WWF television introducing a new character named Mr. Perfect. These were among the greatest wrestling vignettes produced at the time, and maybe even in the history of wrestling (in my humble opinion). Basically, Mr. Perfect would be depicted playing games and sports like horse shoes, ping pong, baseball, basketball and football. He, of course, would win every contest he participated in, as professional athletes like Wade Boggs and Steve Jordan (of the Vikings) watched in awe. My favorite, by far, is when he was hanging out with Jordan in the Metrodome. Perfect threw spiral after spiral to Jordan, before deciding he could do us one better; He proceeded to throw himself a TD pass from one end of the field to the other. Yes, it’s ridiculous to think that a guy could throw the ball so far and so high–and run so fast–as to catch the ball himself before it hit the ground almost all the way down the field, but I ate that shit up when I was little. The entertainment value of these vignettes still holds up today, and you can check them out at the end of this post.

The Mr. Perfect character shot out of the gates and even went undefeated in singles competition for over a year (at least on TV, where it mattered). Eventually, he began a short-lived feud with Hulk Hogan. Perfect was allegedly being booked to win the 1990 Royal Rumble over the Hulkster, but the famously backstage power monger Hogan allegedly (let’s not throw too much mud around) demanded to win on the day of the event, despite the fact that he was already WWF champion at the time (Hogan’s backstage politics could fill an entire book, let alone a post on the Rum). Anyway, Perfect would go on to win the Intercontinental Championship in 1990 and 1991. Nowadays, the Intercontinental belt has lost a little value, but back then it was the second biggest championship in the federation, used to groom the next big stars. Perfect would drop the belt for good to Brett “The Hitman” Hart in 1991. In reality, Perfect needed time off to have surgery for a broken tailbone and bulging discs in his back. If you watch their match from SummerSlam ’91, you can see that Perfect was working in a lot of pain, so kudos to him for doing what was “best for business” at the time. Perfect would eventually return to wrestling in late 1992, even beating Ric Flair in a “loser leaves town” match (Flair’s WWF contract was up and he was heading back to WCW).

The Mr. Perfect character hung around as a wrestler and commentator (after another back injury), until 1997, when Hennig followed just about every other big WWF star down to Atlanta to join Ted Turner’s WCW (World Championship Wrestling). This was kind of the downturn of Hennig’s career, as he had a lackluster stint as a member of several stables, including the famed Four Horsemen and even the NWO (although who wasn’t in the NWO by the end, right? and the less popular West Texas Rednecks (“Rap is Crap” is still a hit record in my book). His WCW tenure was pretty terrible, which made his 2002 return to the WWF all the more surprising. I wasn’t really watching WWF at this time, but I do remember seeing Hennig wrestle a couple of times, and he could still work pretty well. Unfortunately, he was fired after an incident with fellow wrestler Brock Lesnar on a drunken plane ride that has been dubbed by many in the industry as the “Plane Ride from Hell,” which we might have devote a post to at some point or another (lots of bad stuff went down on a plane full of really drunk wrestlers). I never saw Hennig on TV again, and soon, he was gone.

Like most of my favorite wrestlers from when I was a kid, Curt Hennig passed away at an all-too-young age. He was found dead on February 10, 2003 in a Florida hotel room. He was only 44 years old. The Hillsborough County Medical Examiner’s Office blamed a cocaine overdose for the untimely death, but his own father believed that steroids and pain killers also contributed to his demise. I guess when you work through horrible back injuries 300 times a year, it takes its toll. Wrestling continues to be a tough business, but today, it is nothing like it was back in the 70s, 80s and 90s. It’s a shame that Curt Hennig wasn’t at that Old School Raw on Monday. He would have been a great addition. His son joe, aka Curtis Axel (pictured above), is currently on the WWE roster. He doesn’t quite have the talent his old man did, but it’s nice to catch glimpses of one of my old favorites every Monday night.

RIP, Curt Hennig. You weren’t perfect, but you were damn entertaining.

Here are some of those vignettes I promised earlier: