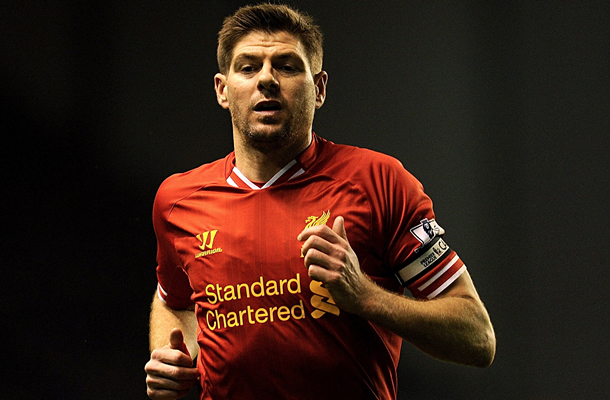 I don’t know about you, but I consider myself a humanitarian. When I see people in need, it is my natural instinct to help them. Old lady carrying a huge suitcase up the stairs? Fear not, Agnes, I got you. Woman with a child having trouble opening a door while pushing her baby carriage? Rest assured, Miss, Jobu’s got that door for you! My girlfriend can’t open up that jar of tomato sauce? Don’t you worry m’lady, let old Jobu take a shot at that lid for you (you totally loosened it for me, babe)! Anyway, there’s little I enjoy more than helping out my fellow man. Right now, I see one of my fellow men in danger. That’s why I’m here today. Liverpool legend Steven Gerrard needs my help–whether he knows it or not.

OK, that last one isn’t true. He’s as boxy as ever. However, the concerns about his skill and physical abilities are legitimately sweeping all of England. Gerrard’s club, Liverpool–the only team the Merseyside native has ever played for, or even rooted for as a child–languishes in the middle of the table with no hope for a league title, and Gerrard is getting some shade thrown his way as a result. Oh how the fickle hearts of fans, and the media, can turn! Here’s a guy that’s been one of the best players ever for both club and country, and has given his all over the last 17 seasons, basically ready to be put on the curb next to everyone’s old junk. Blimey!

Gerrard representing England at the 2014 World Cup in Brazil.

I think the only real solution for Gerrard is to move on. He needs to go play somewhere where he is truly appreciated, respected as the legend that he truly is and paid like the top star he was just a few years ago. He needs to come to Major League Soccer. America is an amazing land of freedom and wonder, Steven. Haven’t you heard? Seriously. My family came here when I was five. It’s freaking awesome. Just listen to “Proud to be an American” by Lee Greenwood, “Courtesy of the Red, White and Blue (The Ugly American)” by Toby Keith or “Real American” by Rick Derringer (yes, the Hulk Hogan theme song)! I don’t know a country that does self pride quite like America, buddy. You’ll be packing your bags in no time.

Oh, there’s also a pretty solid and growing football league here. Have you heard of MLS, Steven? Your boy Frank Lampard has, and he’s coming over to be the toast of the greatest city in the world. I hear Lampard’s NYCFC has another designated player spot open too… Just sayin’. In all seriousness, I don’t think Gerrard is done. He might not be fit to compete in the Premier League, which I consider to be the best league in the world, but he’d be perfect for a two or three year run in MLS. Look at how Thierry Henry has flourished here. How about Robbie Keane? These are guys that maybe couldn’t play at the top level anymore, but have a lot to give a burgeoning league like MLS. There are plenty of good teams here with open DP spots that would really benefit from the addition of a superstar like Gerrard.

Come over, Steven. Come check out America for a while. We will treat you right. We’ll get you set up with a 10-gallon hat, a giant belt buckle and a big wad of chaw… You know, ‘Merican stuff!

Here are some Gerrard highlights, set to some British music:

4 thoughts on “Come on Over, Steven Gerrard”