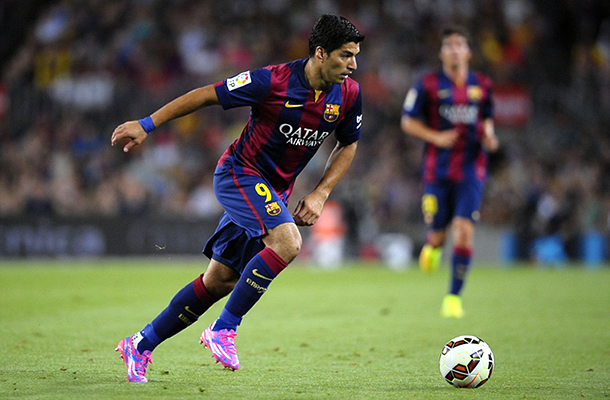 I don’t know where you guys are going to be at noon on Saturday, but I’ll be at my dad’s house with El Bolso watching Real Madrid take on Barcelona in the 261st Clásico (what the rivalry games between Barcelona and Real Madrid are called). This really is one of the can’t miss games in all of football. Two of the world’s best teams, featuring arguably four or five of the world’s top ten players, in one of the biggest rivalries in all of sports going head to head, usually with the future of the league title hanging in the balance? Yes please. As if all of that wasn’t enough, This year’s first Clásico has a little more underlying drama… The Return of Luis Suárez. Get your popcorn ready, everybody.

That’s right, folks. The Uruguayan striker and former Liverpool and Ajax superstar, is finally allowed to bring his talents to Catalonia, having served his four month suspension for biting Giorgio Chiellini in Uruguay’s 1-0 World Cup Group Stage win against Italy this past summer. Yes, he’s played in some Uruguayan friendlies, and a couple of Barça 2 games, but this will mark his first day stepping foot on a top tier match, for club or country, since June. Will he be wearing a Hannibal Lecter mask? A straight jacket? Will they play “Man Eater” by Hall and Oates over the loud speaker? Will he be carrying the manequin they toured around the stadium on the day of his signing (he was barred from stepping on team grounds too)? I just don’t know, but I want to experience it.

As far as the actual game is concerned, it should be a barn burner. Not only are these two of the best teams around, they’re playing like it right now too. After a shaky start that involved two losses in their first three matches, Real has absolutely caught fire, picking up all 15 possible points in their last five games, and scoring goals like it’s going out of style in the process (they’ve outscored their last five La Liga opponents 25-3). Cristiano Ronaldo has been a huge part of that, scoring 15 league goals, and 20 goals in all competitions so far this season. That’s 20 goals in 12 games! He’s not exactly surrounded by Slouches either, with Karim Benzema up front and Isco, Luka Modric, Tony Kroos and World Cup star James Rodríguez in the middle. Real’s defense hasn’t been as sparkling so far (although they too are playing better), but their attack has been undressing teams left and right of late. Real will pose a hefty challenge for Gerard Piqué, Jérémy Mathieu, Jordi Alba, Dani Alves and the rest of the Barcelona D.

All Barça eyes will be on this guy on Saturday.

Barcelona, meanwhile, haven’t allowed a goal yet in league play this season, and have only allowed 3 goals in 11 overall games so far, including Champions League. Yep, they’ve outscored their opposition 28-3 in 11 total games. Absurd. I for one, can’t wait to see Suárez join this attack. With Súarez, Neymar and Lionel Messi, Barcelona will have an attack that has been rarely matched on any club ever around the world. According to coach Enrique Luis, Suárez might not start, but will definitely get on the pitch at some point. Did I mention Barcelona also has a killer midfield, featuring Ivan Rakitic, Xavi Hernández, Andrés Iniesta, Sergio Busquets and Javier Mascherano? Both of these teams are certainly stacked, but who is going to stop the Barça attack if these guys guys click together on the pitch on Saturday? Marcelo? Crazy Pepe? Sergio Ramos, Daniel Carvajal? Good luck, amigos. Oh, there’s also the fact that Messi could very well become La Liga’s all-time leading scorer in this game. The 27 year old Argentina international sits at 250 La Liga goals (364 overall for Barça, and 410 if you count his international goals), which puts him just one behind the current leader, Telmo Zarra, who played with Athletic Bilbao from 1940-1955.

It’s hard to say who even has an advantage, or even a particualr disadvantage, going into this particular game. Barcelona sits at the top of the table with 22 points, while Real is third with 18, one behind second place Sevilla, so both teams are playing very well. One thing that could very well be an advantage for Real is that the game is going to be held at Estadio Santiago Bernabeu, their home for the last 67 years. Real are 62-31-29 all-time in Clásicos held on their home pitch, which is named after former chairman Santiago Bernabeu–one of the most important men in the club’s history. That being said, they’ll be playing without Wales international Garreth Bale, who is out with a abdominal injury. Also, they might be playing with Iker Casillas, which means we might have to queue the Benny Hill music, because I think Barcelona’s attack will eat him alive (seriously, did he go blind this off-season?). Real would be very smart to stick Keylor Navas in net for this one. Barça meanwhile, should be at full strength, especially considering the Hot Suárez Injection™ they’re about to receive. Barcelona is also on an extra day’s rest, which has had Ronaldo up in arms all week.

This game could end 10-0, 5-5 or 0-0, and I wouldn’t be surprised, or at all disappointed. From Ronaldo to Messi to Suárez, there will be something for everyone to pay attention to. Let me know where you guys will be this Saturday!