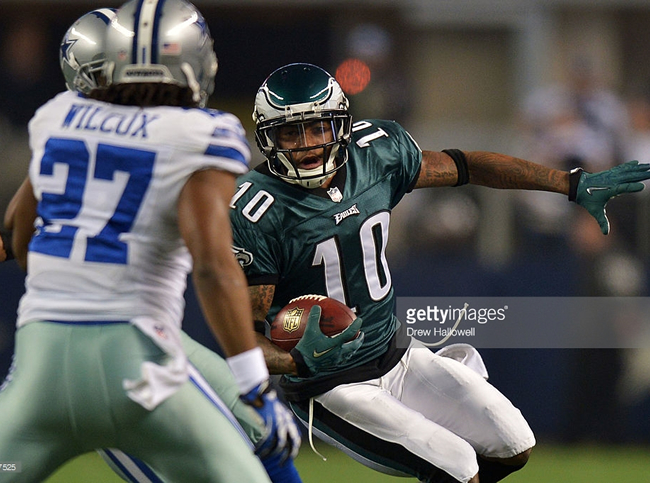 It’s not every day that one of the most explosive wide receivers in the league gets released out of the blue while still in his prime years. Last week, the Eagles released DeSean Jackson amidst rumors that the standout receiver has ties with local gangs from the Los Angeles area. Jackson has vehemently denied the allegations, and will probably cash in on a big market contract if he can properly dissuade the rumors. Here’s why the Giants need to make the best offer.

I’m going to keep this somewhat brief, in the hopes that I’ll be getting more in depth on a “Meet DeSean Jackson” post when the Giants sign him (please!), but it’s no secret that the Giants need a wide receiver. Hakeem Nicks is off to the Colts on a one year deal, which leaves only Rueben Randle, Jerrel Jernigan and Mario Manningham (yes, he’s back) as insurance and protection for Victor Cruz. Cruz is great, and has a good chance to be a pro bowler every year if healthy, but do we trust the other guys?

Manningham was OK for us a few years ago, and made a great catch to help us win Super Bowl, but he only played in 6 games last year (3 starts) and caught 9 passes for 85 yards. How much can they count on him? Randle and Jernigan have shown flashes of potential, but they’ve never been full time starters in this league. Can they step up? Of course they could, but we won’t know for sure until the season starts.

Jackson, meanwhile, is coming off of his best season. He caught 82 passes for 1,332 yards and 9 TDs last year, all career highs. He also has had to adjust to a revolving door of QBs over the last few seasons, as the Eagles have gone back and forth from Michael Vick to whoever his backup at the time was. They stabilized with Nick Foles now, but it was shaky for a few years there. Jackson has that explosive speed that can turn a game around at the blink of an eye, whether he’s catching passes or returning punts (every Giants fan knows what I’m talking about here).

He has, so far, denied the gang ties. He has never been arrested or thought of as a suspect in anything nefarious, other than Marijuana possession and illegal window tints in 2009. Police have talked to him in connection to murders because of a couple of his friends. While that can be a big time red flag, picking shitty friends isn’t a crime, or half of America would be in jail. I don’t know what Jackson went through growing up. I’ve read reports that, after his father died, he got a little out of control as a teenager and may or may not have run around with some bad people, but that could happen to anyone. It just so happened that the guys he became friends with might have been gang members. Jackson has never even been caught with an illegal gun. He is known to have weapons, but they are completely legal and he has permits.

I know the Aaron Hernandez situation opened up a lot of eyes in the NFL, but are we going to punish every player who comes from an inner city because of one knucklehead from Bristol? I don’t want to bring up the race card or anything, but he’s a young, black and outspoken and confident, and I think everyone’s a bit too quick to believe the gang ties rumor. Jackson has also done countless work in the community, famously appeared on “The View” to surprise a bullied teen a, and has always done a lot to help bullied children. I’m not saying all the rumors are false just because of racism and charity work. I’m just saying that everyone seems a little quick to join the bandwagon. I personally think the Eagles wanted to save some money, so they used those loose gang affiliations to excuse cutting him. Remember when they kept Riley Cooper, even though he used the n-word on video at a concert while threatening violence on security guards? Anybody?

Finally, the Giants can’t afford to have Jackson join someone else in the division. He’s been visiting with the Redskins all day today. If he’s going to play the Eagles twice per year, he needs to do it as a Giant. I can’t even imagine what kind of games he’ll have against Philly. We can’t let the Redskins benefit from that. He must do it as a Giant. Jackson might sign elsewhere, as it seems that the 49ers and the Browns are deep in negotiations too. That wouldn’t be as bad, but letting the Redskins get him would be criminal.

Watch the video below… I had to close one eye. Let’s hope he’s got the opposite jersey on in 2014.