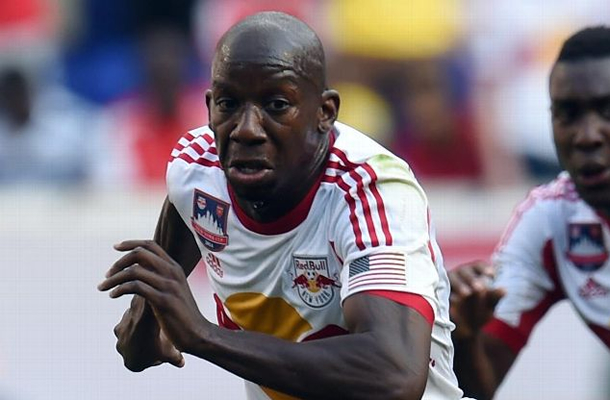 It’s an exciting time to be a New York Red Bulls fan right now. Sure, the team got off to a bit of a rocky start, but this weekend, they cemented their status as legitimate contenders in the East by housing the Seattle Sounders 4-1 at Red Bull Arena. In the game, star striker Bradley Wright-Phillips picked up his third hat trick of the year and now has 24 league goals with five matches to go in the season. Can he tie or break the MLS record of 27 held by Roy Lassiter (1996) and Chris Wondolowski (2012)?

First, a little bit about the 29-year old English international, for those of you who haven’t met him before. Wright-Phillips is the son of former Arsenal player Ian Wright, and got his professional start at Manchester City, playing along with his brother, Shaun Wright-Phillips. He struggled at Man City from 2004-2006, however, and was eventually sold to Southampton. This led him to start a bit of a journey around England, as he played for Plymouth Argyle, Charlton Athletic and Brentford over the next eight seasons and played in League One and the Championship. During his time in England, Wright-Phillips scored 80 goals in 302 matches.

Bradley joined the Red Bulls late in the 2013 season, and helped them to their first Supporter’s Shield Trophy. It wasn’t really until this season that he made a huge impact, though. On April 23, against Houston, he had his first hat trick as a Red Bulls player. His second came on May 10th against the Chicago Fire, and his third was this weekend against Seattle, as I mentioned before. He has also scored two goals on two other occasions this season. He has been a real revelation for a Red Bulls team that currently sits in the fourth Eastern Conference playoff spot.

Wright-Phillips will have five more chances to break this record, as the Red Bulls have matches left against the LA Galaxy, Houston Dynamo, Toronto FC, Columbus and Sporting KC. He has scored a combined 10 goals against these teams so far this season, including 5 in two games against Houston, so I think he might have a good chance at this record. Just his performances so far against the Dynamo give me hope that he’ll be able to catch, or pass, the two record holders. I’m looking forward to seeing what Wright-Phillips can do over the next few weeks.