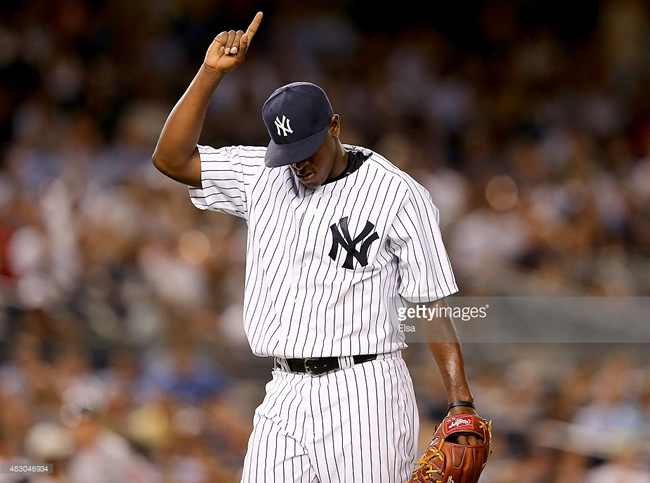 When the last fly ball fell into the glove of Boston Red Sox center fielder Jackie Bradley, Jr, Severino Day ended with a loss that cut the Yankees lead in the AL East to just 4.5 games. Guess what. I don’t care. Luis Severino, the Yankees’ top prospect, and one of the best prospects in all of baseball, made his big league debut, and he was brilliant. Let’s talk briefly about it, as I collect my drool.

Of all of the rookies to make their major league debuts with the Yankees this season (14 in all after last night), Severino’s was by far the most hyped and anticipated. The 21-year old from Sabana de la Mar, in the Dominican Republic, dominated the minors this year. He started in AA, where he went 2-2 with a 3.32 ERA in eight starts, then went 7-0, 1.91 in 11 AAA starts. That performance, coupled with the injury to Michael Pineda, made last night the right time for Severino to arrive. He did not disappoint.

Severino continued his great pitching, using 94 pitches to get through five innings, while allowing two runs (only one earned) on just two hits, with seven strikeouts. Severino looked calm, cool and collected, like a true big leaguer, as he sent the Red Sox down in order in the top of the first. In that first, he made Xander Bogaerts the victim of his first big league strikeout to boot. After a popup and a groundout to start the second, Chase Headley threw away an easy grounder with two away (his 18th error), and Alejandro de Aza followed with an RBI double to put the Sox up 1-0. Severino rebounded by striking out Blake Swihart to end the inning, but the unearned damage was done. Luis struck out Bradley and Brock Holt in a 1-2-3 third, but David Ortiz lead off the fourth with a solo bomb on the only real mistake Severino made all night to make the score 2-0. Severino rebounded like a veteran pro, striking out Hanley Ramirez, grounding out Pablo Sandoval and striking out Mike Napoli to end the inning. There was more brilliance from Severino in the fifth, as he sent the Sox down in order and struck out Bradley to end his own night.

Was this a perfect debut for Severino? No. First of all, he lost, failing to become the first player under 21 years old to win their big league debut for the Yankees since Al Leiter in 1987. Second of all, he it took him 94 pitches to get through five innings. That being said, there was plenty of good. Severino got his fastball up to 98 on the night, and featured two different sliders (one more of a cutter) and a changeup. He used them all to keep the Red Sox offense mostly dormant. He also got to two strikes on nearly 80% of the batters he faced, and generated eight swings and misses on the night. Another note: Severino is the first American League pitcher to pitch five innings while allowing two hits or less with no walks and at least 7 Ks in his major league debut… ever. Only Johnny Cueto and former Yankees farmhand Manny Banuelos have ever done it in the majors.

So, overall, a great night for Severino. We hope that, next time out, he limits his mistakes and is a bit more economic with his pitches, but if he can put together some more outings like these, the Yankees won’t miss Michael Pineda at all. Tonight, we’ll watch the Yankees take on the Sox in the series finale. Unfortunately, CC Sabathia is on the mound, so we might drop the three-game set. Here’s hoping CC remembers how to pitch like Severino did last night.