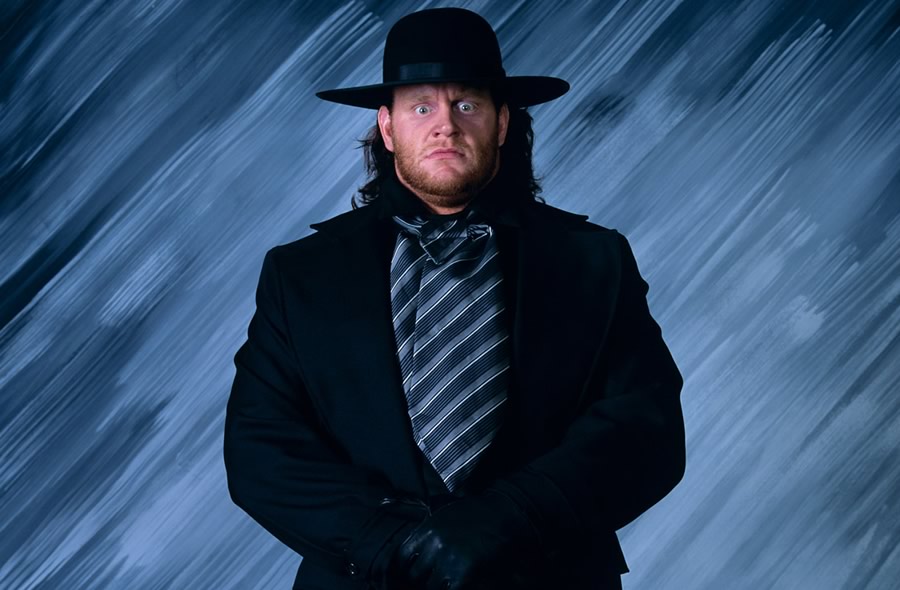 This will probably the most controversial induction the BGHOF will ever have. I fully expect to catch a lot of flak about it, but I hope that you all read this post carefully before you start throwing things at me on the street. Mark Calaway is one of the most beloved and revered professional wrestlers of all time, and he has turned the Undertaker character into an equally revered entity, but that doesn’t change the fact that the original gimmick is one of the most ridiculous things anyone has ever come up with. For that reason, I must induct the original Undertaker gimmick into the Hall. Now nobody kill me.

First, let’s talk about the man behind the legend, Mark Calaway. The 6’10” native of Houston, Texas played basketball at Texas Wesleyan University, but professional wrestling was always his true calling. His early days in the “sport” were filled with many different gimmicks. From Texas Red in WCCW to The Master of Pain in the USWA to The Punisher in WCWA (Texas), nothing seemed to really stick for him. In 1989, he began a sting in World Championship Wrestling (WCW) under the name “Mean” Mark Callous. He tagged with Dan Spivey for a while as the Skyscrapers, and eventually joined up with Paul E. Dangerously. After some moderate success, he eventually left WCW and signed with the WWF in late 1990. That’s where our fun begins.

This was the cartoon era of the WWF so, when Vince McMahon found this 6’10” monster with a great look and incredible athleticism, he thought… “This guy would make a perfect wild west undertaker type character, wouldn’t he?” Nobody thought to tell him that this was the dumbest idea ever, and a completely unbelievable character, and so the WWF moved forward with the gimmick. They put mark in an all black suit (except for the boots, which were gray around the calf and shin area. They gave him an old timey wide tie that was also accented with gray. They even gave him a big, black felt fur 10-gallon hat, like morticians wore in the 1800s, because why not? To really sell the point that he was “the dead man,” they made his face ghastly white and gave him big purple bags under his eyes… Like a dead body! However, as Roddy Piper would point out when “Kane the Undertaker,” as he was known then, debuted at Survivor Series, he kinda just looked like someone who really needed a nap. Did I mention the fact that the Undertaker was practically uncommunicative, and damn near impervious to pain?

Anyway, after ‘Taker was introduced by “The Million Dollar Man” Ted DiBiase, and managed for a short time by Brother Love (Bruce Pritchard in god awful makeup and a white suit), he was eventually paired with possibly the most ridiculous part of this entire gimmick, his manager Paul Bearer (played by the late William Moody, a real life funeral director who had also portrayed a wrestling manager named Percy Pringle in the southern territories throughout the 80s). Get it? He’s a funeral director named Paul… Bearer… ah? If that ain’t funny, I don’t know what is! Bearer was even more cartoonish and ridiculous than The Undertaker. He spoke in a shrilling high pitched voice, wore the absurd caked-on pale makeup (with super dark and thick painted on eyebrows to boot), and carried around a golden urn. The urn contained some kind of mystical power that the Undertaker would turn to when he needed a boost during a match. If ‘Taker was catching a beatdown, Bearer would thrust the urn to the heavens and ‘Taker would regain the upper hand. At one point, the urn got twice as big. It also spilled endless green smoke when Yokozuna beat the Undertaker in a casket match and even at one point contained a giant spotlight to signify whatever supernatural being was inside. These would have been cool things to watch on Hulk Hogan’s Rock ‘n’ Wrestling, but in actual wrestling being performed by human beings? No way.

Look. This post is in no way a shot at Mark Calaway. In fact, it is meant to provide some more insight as to just how incredible a performer Calaway was, and still is to this day. Seriously… he turned a dead supernatural wild west undertaker into a 25 year run that is probably hands down still the post popular thing in the WWE come Wrestlemania time. Did the guy who played Mantaur go on to a 25 year run with the WWE? No. Did Max Moon? How about Bastion Booger? Nailz? The Goon? How about Damien Demento? No! No! No! And those guys had gimmicks that were just as ridiculous as the Undertaker was back then. It took a special, once-in-a-generation type performer to turn that pile of poop character into the huge money draw it has become today, and that’s just what Calaway was and is. He’s a guy that could probably have had this type of career with any gimmick, and he really made chicken salad out of the chicken shit he was given by Vince McMahon in 1990. It’s pretty incredible. As “Stone Cold” Steve Austin said on his podcast with HHH, you could have given that gimmick to 100 other guys and it would have died a miserable death.

Today’s Undertaker character is still great, but that’s because it is much different than it once was. At some point, in the late 1990s, ‘Taker went from being this supernatural dead man type character to more of a sinister, dark arts worshipping kind of guy. He would wear dark robes, crucify opponents on a giant version of his logo, hang out with druids and he even recruited people into his ministry – basically a cult leader. For a while in the early 2000s, Calaway got completely away from even that, portraying “The American Badass” Undertaker that was really just a motorcycle riding, bandana wearing, ass kicking son of a gun from Texas. He even came out to Kid Rock’s “American Badass,” which was awesome. He still used the Undertaker name, but the character was nothing like it once was. After a few years of that, we saw the darkness creep back into the character, and he has since gone back to that dark arts cultish type of guy (although he’s a fan favorite, so he won’t be crucifying anyone… probably). Calaway had to evolve the character because the audience changed, and the fact that he was able to do so without losing any popularity – you can argue that he’s more popular than ever now – is the mark of a true once-in-a-lifetime performer. There will never be another Mark Calaway, and there will never be another Undertaker.

That being said, none of his Calaway’s accomplishments take away from the fact that that original character idea had no business ever getting over with fans, or drawing any money. Because of that, and in the most honorable way possible, I welcome the original Undertaker to the Bad Gimmick Hall of Fame. Congratulations!

4 thoughts on “Bad Gimmick Hall of Fame: The Undertaker”