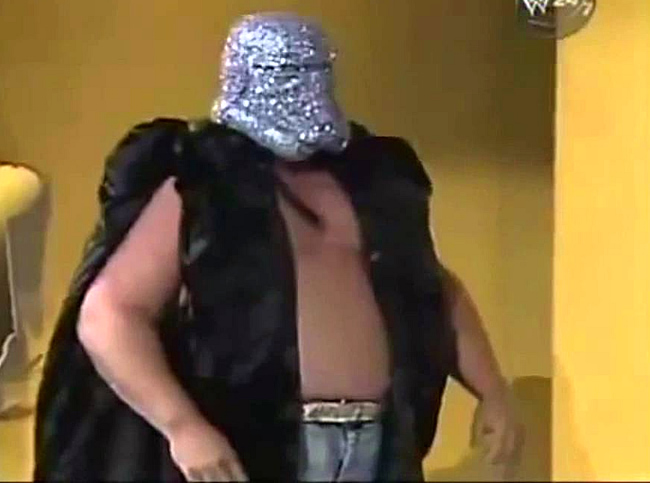 When you think about failed gimmicks, or giant busts of the wrestling world, today’s Bad Gimmick Hall of Fame inductee has to be among the top. It’s 1990s wrestling ridiculousness, as well as WCW early 90s ineptitude, at it’s absolute quintessential finest. Let’s get to know the story of The Shockmaster, which actually might not even have been the worst gimmick portrayed by Fred Ottman. I know… shocking!

I know it’s been a while but, as always, let’s first get to know the man behind the gimmick. Fred Ottman was born on August 10, 1956 (Happy Birthday, Fred!) in Norfolk, Virginia. According to a profile in the Miami Herald from this past June, Ottman grew up in the Miami area and, because of his size (6’3″ and eventually close to 400 lbs), starred at football and track & field in high school before turning to power lifting in his late teens. Now, if you wer tall, big, and power lifting around the Florida area in the 1980s, odds are you were going to run into some wrestlers and be recruited by one of them. For Ottman, who had been a huge wrestling fan throughout his childhood, it was the Fabulous Kangaroos (Al Costello and Don Kent) who noticed him, and they hooked him up with the infamous Boris Malenko for some training.

Ottman began his career wrestling in Georgia as “Big Bubba,” (because these were the 1980s, and he was big, fat and white… so that’s what his name had to be), but his first bad gimmick was that of Big Steel Man (also known as U.S. Steel and Big Man Steel) in Florida Championship Wrestling. As you might imagine, the steel-related gimmicks played on Ottman’s real life blue collar upbringing, and he wrestled as a steel worker. He would wear construction gear to the ring, including the hard hat. While that might sound like an annoying 80s gimmick (it was), it’s the gimmick that got him noticed by Vince McMahon and the WWF, so how bad could it be? Well, pretty bad… but he still got signed.

It was in WWF where Ottman would receive his first terrible gimmick. I dunno about you, but when I see a guy who’s 6’3″ and weighs damn near 400 lbs, I want to put him in tight white pants, a “Where’s Waldo” striped shirt, and a sailor hat. It’s not something I like to talk about, because I’m married now, but god damn it… it’s what I like! Thankfully for eight year old me, Vince McMahon had a similar fetish. The Chairman of the WWE put Ottman in that outfit and called him Tugboat (originally Tugboat Tyler and then Tugboat Thomas), because why the hell not? Unfortunately, Vince’s tugboat fantasy also included miming the airhorn cord pull and hollering “Toot! Toot!,” which I’m not into as much; but that’s what tugboats do, so toot away, you sonofabitch.

Anyway, his first big angle was as Hulk Hogan’s good buddy. You see, the man with the largest arms in the world was in the midsts of a giant feud with Dino Bravo, Haku, the Barbarian and a man named Earthquake (John Tenta), so Hogan needed a fat guy to help him out. He toured the countryside battling those guys with the Hulkster, even appearing at the 1990 Survivor Series with Team Hogan. Anyway, like all good things, Tugboat’s run had to come to an end, and it did so with a dastardly heel turn. By the time of his turn, he was no longer involved with Hogan, so he actually turned on the Bushwhackers, but whatever. This led to Tugboat becoming Typhoon and teaming with his former rival, Earthquake, as the Natural Disasters (phenomenal tag team name). He had a good tag team run with his fellow hefty grappler, winning the tag team belts from Money Inc. in 1992.

Anyway, this brings us to the actual gimmick that is being inducted into the BGHOF today. After leaving WWE in 1993, Ottman signed with the rival WCW. It was the single greatest (and worst) thing he ever did for his career. WCW had the brilliant idea of putting Ottman under a mask (or rather a silver glitter-covered storm trooper helmet) and a black cape, calling him the Shockmaster. A, that name is gross (think about it). B, Nobody on earth would have failed to recognize the familiar helmet as a bedazzled version of the one from the famous George Lucas Film. C, despite clearly having the attire (and the dubbed-over gritty voice) of a bad guy, the Shockmaster was going to be brought in to team with Sting, Dustin Rhodes and Davey Boy Smith in their Fall Brawl War Games match against the baddest of the bad: Sid Vicious, Big Van Vader and Harlem Heat. Watch the video, and then read all about it:

I know you guys must be thinking: there’s no way this character, which I’m pretty sure WCW execs stole from one of the drawings inside my third grade Trapperkeeper, would ever fail. Well, you’d be wrong. The unveiling of the Shockmaster is probably the biggest flop in the history of professional wrestling. There, I said it. First of all, the outfit, which I already described, was stupid. But, it seems that wasn’t the original idea for an outfit. Said Ottman in an interview with WWE.com last year:

What I wore on “Flair for the Gold” wasn’t the original outfit. That was just for going out on that segment. I still have the original outfit, matter of fact. It’s blue and it has gold lightning bolts going down the legs … and a Mexican ­style mask with a lightning bolt going through the face and the top was where my hair would come out. So that was an actual wrestling outfit. The outfit you saw was what they wanted me to go out in, you know. Just take the shirt off, put on the top, which actually belonged to one of the Colossal Kongs. And the helmet itself was a “Here, put this on and see if you can see out of it” kind of deal. Last minute.

They put it over my head, and the glitter was coming through the eyeholes and into my eyes. So they got a pair of dark pantyhose from a secretary, cut out two pieces, glued them and put ‘em over the eye holes so the glitter wouldn’t come into my eyes.

Did no one think at any point that this was a horrible idea? How did no one know this was destined to fail?? Well, if you believe Dusty Rhodes, this failed because of jealousy and deceit! Said Rhodes:

There was sabotage involved, I really believe that. [Producer] David Crockett was on the payroll with us at that time … the takeover had just begun, with Eric Bischoff and the Hogan era and all that stuff. We rehearsed it during the day, it went perfectly, and like I say, sabotage came into play — building up about four or five different floorboards and not telling him about it. “When the smoke goes off, he trips and falls on his ass and we make big fun of it, and Dusty falls on his ass.” There was a lot of that going on back then in our business. Any chance you get to take someone out of power and just have a big laugh, they took. I’ve done it! I’ve been the [saboteur]. When I say sabotage, I don’t mean like, “Boy, this is serious stuff.” It’s just the wrestling business. “You got an extra board? Put it on there, maybe he won’t see it.” Well, he didn’t see it. Or maybe it’s just my imagination.

Oh boy, did Fred not see it! Ottman burst through the wall, right on cue. The problem? He tripped over the bottom of the wall and immediately fell forward onto the floor. As he tumbled, on LIVE TELEVISION, his bejeweled toy helmet went flying off of his head. Despite his best efforts, anyone paying attention immediately knew the true identity of the Flopmaster. Well, on live TV, the show must go on! Ottman quickly grabbed the helmet, which somehow didn’t break, and put it back on his head. He then stood up and, as his teammates and on screen enemies looked on in a combination of horror and amusement–Ric Flair can be heard saying “Oh God,” Davey Boy Smith said “He fell flat on his arse! He fell flat on his arse!” and Booker T. (known as Kole back then) chimed in with “Who is this motherfucker?”–proceeded to wait the painfully long amount of time it took Ole Anderson to get his shit together backstage and start the backstage voiceover for the Shockmaster’s debut promo (which sounded stupid, like a 50s cartoon villain or something).

The best part? The crowd had absolutely no reaction to any of it. They didn’t even laugh! You would think that, after that unmitigated disaster, WCW would have scrapped the gimmick, and probably Ottman too, but they didn’t. They simply repackaged The Shockmaster as a clumsy, happy-go-lucky kind of guy, presenting him in pre-recorded segments throughout the next few weeks (at one, he was being interviewed by Tony Schiavone in a diner). The match at Fall Brawl went on as planned, and The Shockmaster even got the win! By the way, by this time, he was coming to the ring wearing a white shirt and a construction hard hat! But he was still the Shockmaster! Even though he looked not like some kind of mysterious lightning-controlling man, but a fat construction worker, like his Big Steel Man Gimmick… Oy vey.

Believe it or not, this gimmick got even dumber! A while later, WCW debuted a new character named The Super Shockmaster. This man was presented as the nephew of the original Shockmaster, and he referred to his uncle simply as “Uncle Fred.” Uncle Fred! That’s not even the worst part! The character was also played by Fred Ottman! He played his own nephew! Granted, he wore that fancy mask he talked about in the quote above, but come on! It was clearly him! Who’s kidding who here?!

Anyway, I’ll wrap this up now, because I’m getting angry, but I’m glad you guys stuck with me to the end for this one. Ottman returned to the WWF in 1994 as Typhoon, and eventually moved on to the independents and Japan. He still appears on WWF TV from time to time, most notably as Tugboat in the Gimmick Battle Royal match at Wrestlemania X-7. He retired in 2001. Look, from all reports, Fred Ottman is a good dude. He still lives in Florida, and owns a building cleaning service there. I wish him well in all his endeavours, but he’ll always be The Shockmaster to me, which is not the way I would want to be remembered. Welcome to the BGHOF, Shockmaster!