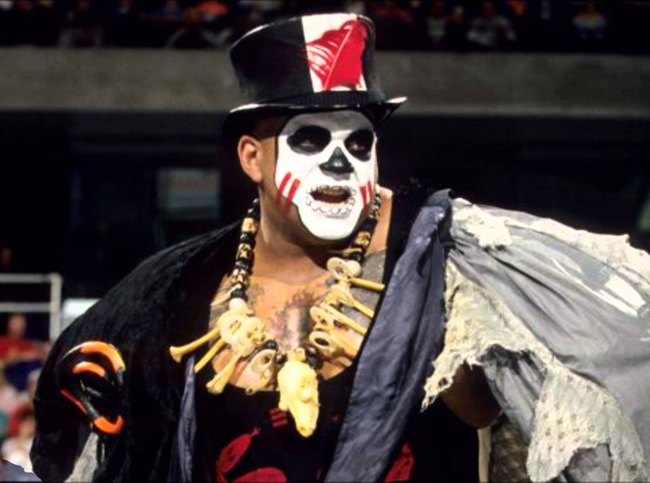 Top hats. Skeleton paint. Bone necklaces. Fire! And brown goop! Oh so much brown goop! Before he was the ultimate fighting machine, and a lowdown, dirty pimp, Charles Wright dedicated his life to the salacious art of voodoo. Let’s take a look back at the latest inductee into the Bad Gimmick Hall of Fame, the scary voodoo priest… Papa Shango!

If you thought this story wasn’t going to have anything to do with Sylvester Stallone, you’re wrong! Charles Wright, a native of Palo Alto, California, was discovered near the set of the Stallone arm wrestling classic Over the Top in 1986. No, Sly didn’t discover the man himself, but, but some wrestlers starring in the movie –Terry Funk and Scott Norton, to name a couple– found the strapping young lad tending bar near the set. Go figure! Wright’s new wrestling buddies recommended he go train at Larry Sharpe’s Monster Factory –many stars have come out of of that place, run by Larry and his son, the late “Iron” Mike Sharpe– so off he went to become a wrestler.

After a couple of years of training, Wright was signed to a full-time contract by Jerry Lawler, and reported for duty in Memphis’ USWA promotion using his first official gimmick… The Soultaker! This gimmick was actually based on a tattoo that Wright had on his arm. With a name like The Soultaker, you’d think Wright’s character would have been somewhat supernatural, like the Undertaker, but Wright’s character didn’t take souls through magic. Apparently, he took people’s souls by beating the piss out of them. On camera, Wright was brought in by his former trainer, and on-screen manager, Larry Sharpe, as the next big challenge for the USWA champion, Jerry “The King” Lawler.

According to Sharpe, The Soultaker had “the back of a monster! The side of a monster! The front of a monster,” (what about his other side, regular human?) and was here to take Lawler’s belt. Soultaker was booked like the typical big man, destroying jobbers–sometimes two at a time–all the while calling out The King for a shot at the title. Not too long after that, Soultaker got his shot at Lawler and won the belt. He dropped it back to Lawler a couple of weeks later, but it was still a pretty impressive push for a guy with no experience.

After his USWA run (during which he tagged with Mark Calaway, the future Undertaker), and a run in New Japan Pro Wrestling, Wright came back stateside and signed with the WWE after being recommended by Calaway). He debuted briefly as “Sir Charles,” but I couldn’t find much of anything on this character. It’s fairly obvious that the name was an homage to NBA great Charles Barkley, who was still active at the time and dominating the NBA. In 1992, Wright was repackaged. I like to think that his next gimmick was inspired by The Soultaker, but given the 1990s Vinny Mac cartoon treatment. The new character was to be Papa Shango, a scary practitioner of voodoo.

As far as corny cartoonish gimmicks go, I actually think Vince did a pretty decent job of creating Shango, as long as you ignore the culturally insensitive and potentially racist nature of the entire gimmick (it was the 90s, man!). First of all, Wright is humongous (billed at 6’6″ and 330 lbs), and all tattooed up, which gave him a leg up on the whole being scary thing. Shango’s costume was modeled after the Loa Baron Samedi, who is one of the more recognizable figures in the voodoo religion (by recognizable, I mean by non-practitioners, as Samedi has been used in pop culture depictions of the religion quite a lot). Shango wore a black top hat with a red feather, and had his face painted like a skull. He also wore a lot of voodoo type jewelry (or at least Vince McMahon’s interpretation of voodoo jewelry), including a necklace made of old bones.

Shango also came to the ring with a big staff with a human skull on the end of it. It shot smoke from its mouth. Smoke! Once in the ring, he used his voodoo to make opponents throw up, and even set their feet or hands on fire out of nowhere. He also cast spells on them, and they’d double over in pain for seemingly no reason. Did I mention that he could control the house lights? The fucking house lights! There he’d be in a match, and he would bring the house lights down to help him gain an advantage. With voodoo magic! That’s how voodoo works, right? Accurate or not, Shango’s character was fucking scary. Ten-year-old me didn’t care that voodoo maybe didn’t really work like that. Ten-year-old me was just worried about changing his underpants after Papa Shango’s appearances.

Shango was almost immediately inserted into the main event spotlight. At Wrestlemania VIII, he did a run-in during one of the main event matches  –Hulk Hogan vs. Sid Vicious. Unfortunately, Wright missed his cue and almost ruined everything. He was supposed to run in and beat up the Hulkster after the big boot and leg drop, but he was late. Vicious was forced to kick out of the leg drop, which nobody ever did back then. Frankly, I’m surprised Hogan didn’t have Wright quartered and his body parts distributed to different wrestling territories throughout the land. I guess 1992 Hogan didn’t quite have the pull 1980s Hogan did, eh? Anyway, the Ultimate Warrior famously ran down to make the save as Hogan was being attacked, which set up Shango’s next big feud.

This was one of the more epic WWF rivalries for ten-year-old Me. First of all, we hadn’t seen the Warrior for almost a year before he returned at ‘Mania, so I was pumped to have him back. And then, to have this new scary voodoo man set his sights on my hero of heroes? Wowsers. Papa Shango pulled out all of his dastardly tricks in order to try to get in the Warrior’s head in advance of their big match. Warrior was made to vomit uncontrollably, and once even bled from his hairline during an interview with Mean Gene Okerlund. From his head! Blood! Sure, it looked like Hershey’s chocolate sauce, but it had to be blood, right? I don’t think Shango was trying to turn Warrior into an ice cream sundae… They built this rivalry up for a while, but the payoff actually never came. Shango simply didn’t get over with fans (except little terrified children, I guess), and the feud was dropped. The Ultimate Warrior ended up challenging “Macho Man” Randy Savage for the title at SummerSlam instead, and Shango was pushed down the card so fast the skull on the end of his staff spun. Shango would rarely be seen on TV from then on, and he was even eliminated from the 1993 Royal Rumble in less than 30 seconds. Looks like the curse was on him, ah? Ah?

Shango went away, and Wright was sent back to the USWA, where he won their championship again, this time as Papa Shango. Wright felt he was being used to pander to a black audience, asked to drop the belt and went back to bar tending and independent wrestling. The WWF came calling again in 1994, however, and Wright was repackaged as Kama: “The Supreme Fighting Machine.” Rumors had it that it was Shango that was going to come back as the secret reason for Bob Backlund’s abhorrent heel behavior at the time, but, thankfully, that didn’t happen. His most famous feat as Kama was melting down the Undertaker’s urn and turning it into a gold chain. Wright eventually left the company, but was asked back again in 1997. Wright says he was brought back to reprise and update the Papa Shango character again (Vince must really fucking love this gimmick!), but that plan was nixed, and Wright became Kama Mustafa and joined the Nation of Domination.

Kama was often referred to as the Godfather of the NoD. I think you know where this is going. In 1998, Kama’s name officially became the Godfather, and he started coming to the ring with random “hoes” in tow. As ridiculous as it sounds for the WWF to send out a guy who claimed to be a pimp with dozens of pretend hookers that were basically local strippers from whatever city they were touring at the time, this gimmick got over fucking HUGE. Wright’s charisma was allowed to shine through, and just about all of his catchphrases, like “It’s time once again for everybody to come aboard the Ho Train” and “So let’s roll a fatty for this pimp daddy and say ‘pimpin’ ain’t easy,'” caught on like nobody’s business.

Thinking about this now, it’s absurdly sexist, racist and I don’t know what else, but 16-year-old me was highly entertained. I’m sure the parade of half-naked women accompanying him to the ring had something to do with it. Once this gimmick ran its course, Wright turned heel, joining Right to Censor; he became “The Goodfather” and vowed to help Stevie Richards rid the WWE of filth. The Godfather came back again in 2002 (touting his now legitimate escort agency), but the time was up for this gimmick. Wright basically retired and moved to Vegas, where he managed Cheetah’s… a strip club. The Godfather made one last appearance as a surprise entrant in the 2013 Royal Rumble, but that’s been pretty much it for Wright, save for some sporadic independent dates.

As great and fun as The Godfather gimmick was, Papa Shango simply didn’t get over. Looking back, it was just another one of those Vince McMahon cartoonish over-the-top type gimmicks, and that’s why it didn’t work with fans. Little kids might have been scared, but the adults who actually paid for the tickets and merchandise felt like they were being treated like fools. Keep in mind that this was right around the time when the tides started turning in WCW’s favor, and Vince’s terrible gimmicks and inability to build stars were the main reasons for that shift in popularity. Either way, we gladly welcome Papa Shango into the BGHOF! Congratulations, Papa!