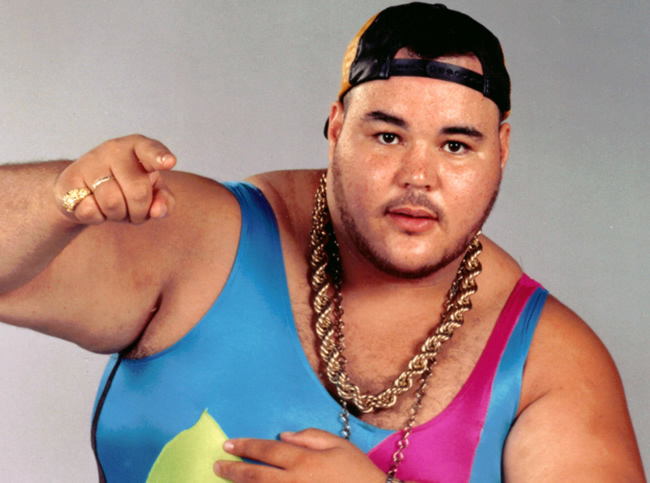 When Paul Neu decided to become a professional wrestler, do you think he ever envisioned himself as a neon-wearing rap artist? I’m not entirely sure. When he first debuted, and started making a name for himself in Europe, the 6’2″, 400 lb behemoth was known as Cannonball Grizzly, a badass with a mohawk who wore simple black tights or a singlet, and was just in the ring to kick some ass. He carried around a chain, but not a chain of gold around his neck… an actual chain. For ass kicking. Are you gonna mess with a guy who carries a chain around?

All that ass kicking got him noticed in the states, and he was soon signed by Jim Herd and WCW. If you haven’t heard of Jim Herd, he’s better known by insiders as “The Pizza Man,” because he was hired away from Pizza Hut to run WCW. Turns out his gimmicks were cheesier and even more crusty than the pizza’s he’d previously slung. Seriously, Herd had some of the worst gimmick ideas of all-time, as he insisted on having every wrestler become an over-the-top cartoonish character–something Vince McMahon was just as guilty of in WWF at the time.

When it comes to Herd, we’re talking some real stinkers. Remember Oz? That BGHOF inductee was a Herd creation. So was a tag team named the Ding Dongs (masked wrestlers who constantly rang a bell in their own corner…for some reason). Shit, the guy even tried to make Ric Flair into Spartacus. Ric Flair! The fucking Nature Boy! The kiss stealin’, wheelin’ dealin’, chariot ridin’, Roman fightin’…… wooo?

Anyway, the big idea for the ass-kicking Cannonball Grizzly was to turn him into a rapping fat guy. Let me first be clear about one thing. Rapping fat guys are awesome. From Notorious B.I.G. to Heavy D to the Fat Boyz, rapping fat guys will always have a special place in my heart. The problem with P.N. News, as Neu was so cleverly named (get it? Paul Neu… P.N. News? And it also kind of sounds like PM Dawn? Ah?), is that he couldn’t rap, and looked more like an overstuffed piñata than a wrestler.

One thing you should understand about the 1990s, is that during this time, white people decided rap was too urban, and was probably giving minorities and the urban community too much joy, happiness and empowerment, so they decided to steal it, exploit it and run it into the ground. The family-friendly rap train was powering down the tracks, and no one was going to stop it. Remember Vanilla Ice? How about The Fresh Prince? How about the fact that every early 90s movie seemingly had a ridiculously soft rap soundtrack. Don’t believe me? Go watch Robocop 3, or Rocky V. OK don’t, they’re terrible. But take my word for it, friendly rap was definitely in, and WCW wanted a piece of the pie.

While the bastardization of a culture that came about because of disenfranchisement and anger might sound like a terrible thing, we wouldn’t have P.N. News without it, and what would you be reading right now otherwise? Anyway, WCW, an organization based in the South and run by a crazy white billionaire, decided it needed a rapper guy to help them take advantage of this cultural phenomenon and appeal to eight year old white kids everywhere, so we got P.N. News.

To be fair, News did attempt to rap before and after matches, if you consider the aforementioned “Yo, Baby! Yo, Baby! Yo!” rapping– I’m willing to bet Jim Herd and Ted Turner actually did–but it was just totally terrible. Little southern white kids who’d never heard the poignant lyrics of Eric B. and Rakim, Big Daddy Kane or Public Enemy thought to themselves… “Hey! This rap stuff is A-OK, Y’all!,” so News did have a pretty positive fan reaction from them, and probably their high-waisted jeans wearing mothers, but that’s about it.

News made his debut in May of 1991 in an episode of World Wide Wrestling, and entered almost immediately into a feud with “Stunning” Steve Austin, who held the WCW World Television Championship at the time. News’ biggest match during this run was, by far, the scaffold match he had at the 1991 Great American Bash. Because putting a 400 lb fatso on a scaffold 20 feet in the air doesn’t really make for a crisp and entertaining matchup, News partnered with “Beautiful” Bobby Eaton against Austin and Terry Taylor (then known as Terrence Taylor of the York Foundation). Those three guys were much better suited to do strenuous physical activity, but the rules were still changed to accommodate News’ high-risk physique. Instead of having to knock the opponent off the scaffold, a terrible capture the flag-type stipulation was added to the match, all but guaranteeing that it would be a total shit show.  No one went off the cage, and News and Eaton won by disqualification. Mick Foley would have been ashamed. To be fair, maybe that’s not the match to have when a 400 lb fat guy is involved. I’m sure News did his best.

Unfortunately, News’ run soon got pulled out from under him. The fans simply weren’t picking up the rhymes he was spitting, or the air he was huffing and puffing while being “blown up” in the ring. It didn’t help that News botched his finisher (the “Broken Record”) at a house show and caused wrestler Dave Sheldon–aka the Angel of Death–to be out for nearly a year with a knee injury. Although he eventually faced Austin for the United States title in November, the news was all bad for P.N. after that botch. Soon, he was released back to the indies.vHe’d reappear in ECW in 1999 and eventually join Da Baldies, but he was never to be seen by a national TV audience again.

Much like our other gimmicks, I don’t mean to disparage the performer, Paul Neu, for doing his job. When you’re looking for your big break, and you get it, sometimes you end up rapping in spandex that has been severly stretched beyond its breaking point by your large body, especially in the early 1990s. Even if P.N. News been given a better name (maybe Big Daddy Pain? Ah? KRS-One23? The Notorious P.I.N.? Grandmaster Splash? I could go on all day), or if his theme simply hadn’t been a generic rap beat with corny 90s synth thrown in, this gimmick was never going to work for a guy like Neu. This gimmick needed a more believable performer to pull it off. Paul Neu wasn’t the one. See?

Just a couple of years later, Vince actually stole this idea, but found two guys more suitable for the role. Mabel and Mo–along with their real rapping manager Oscar–were put together, and Men on a Mission was born. The trio got somewhat over with the crowd and went on to have some pretty solid success in the tag team division. Hell, Mabel even won the 1995 King of the Ring, battled Diesel for the World title at the worst SummerSlam ever and enjoyed a lengthy WWE career. Plus… dat theme song tho.

Who knows what could have been for Paul if he’d been allowed to keep his Cannonball Grizzly gimmick? Who am I kidding, he probably still would have stunk. One thing to note, however, is that News is fellow BGHOF inductee Mantaur‘s real life cousin. Let’s help them keep the shame all in the family, and welcome P.N. News to the BGHOF!