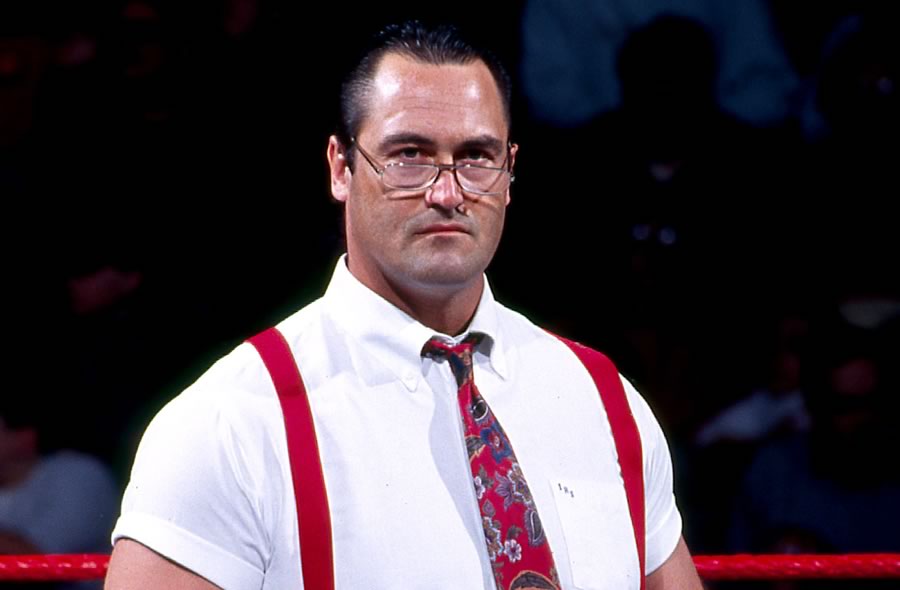 [dropcap]I[/dropcap]f there’s one thing I hate, it’s paying taxes. Now, I’ve never had to be audited or anything bad like that (heh heh… take that, government), but I can imagine it must be among the most painful things in the world. You have to deal with some pencil-pushing loser who was bullied all his life and now has finally chosen a profession that allows him to hit the bullies back where it hurts most… their wallets. What could possibly make this scenario worse? You guessed it… if this guy was given a microphone and put in front of 20,000 people every night. That’s how we got our next inductee into the Bad Gimmick Hall of Fame, Irwin R. Schyster.

I mean is there anything worse than a guy who cheats to wins his wrestling matches and then, on top of that, tells you he’s going to make you pay for all of your financial schemes? Vince hit one out of the park with this gimmick for sure, but it doesn’t change the fact that this is one of the more ridiculous and terrible gimmicks of all time.

Mike Rotunda, as his friends and family probably know him, was born in 1958 in St. Petersburg, FL and went on to wrestle varsity for Syracuse University. After graduating, he joined his brother-in-law Barry Windham in Florida Championship Wrestling (because really, what else can you graduate to from college wrestling if you’re not good enough to go to the Olympics) and was quickly noticed by Vince McMahon and the WWF. His first couple of runs with the WWF were somewhat successful, in that I remember his character and a couple of his matches, but he never really found a good gimmick to stick with, and bounced back and forth between the WWF, the AWA and the NWA. His most famous gimmicks were as one half of the U.S. Express with Barry Windham in WWF, and as a member of Kevin Sullivan’s Varsity Club in Jim Crockett Promotions of the NWA.

When Rotunda returned in 1991 with his new taxman gimmick, he really left his impression on me. He came back as Irwin R. Schyster (forehead slap is acceptable when you figure out the acronym for that is IRS), a former IRS agent heel who threatened to make everyone pay his or her taxes. Needless to say, the type of people who make up the WWF/WWE audience (especially back then) didn’t take too kindly to any involvement by the government in their weekly wrestling programs, nor did they take too kindly to the idea of paying taxes of any kind. Here’s a little sample of what I.R.S. brought to the table:

I love this about WWF days of yore. We had just seen this guy in the WWF like four years before, and we were supposed to believe that he had left, gone to accountant school, become an IRS agent, become tired of dishing out tax audits and decided to join the WWE so that he could pound people into tax-paying submission? Of course not. Because in wrestling, old gimmicks don’t count (Albert who?). IRS was a whole new wrestler, and Mike Rotunda was dead somewhere. All resemblances were coincidental.

I’d like to pause here to address something I’ve wondered for the last like twenty years and finally solved while researching this post (back when it originally debuted on Camel Clutch). Does anyone else remember IRS taking off his pants in his early matches and wrestling in these gross looking stocking type tights? Like pantyhose, but darker so you couldn’t see his… auditables. He did this in his first couple of matches before someone backstage realized it looked like he was wearing pantyhose, and made him keep his pants on. None of my friends ever believed me when I told them. Unfortunately, the video that accompanied my original post has been pulled down off of Youtube, so I guess I’ll never be able to prove this again… I swear! Pantyhose!

Anyway, IRS had a pretty good Intercontinental Championship feud with Brett “The Hitman” Hart (back when the IC Title meant something), although he never won the belt, and a small feud with the Big Bossman (who apparently cheated on his taxes… tsk tsk), but his prime run didn’t come as a singles competitor. I remember him most as part of one of the better heel tag teams in the 90s (and one of the best booking decisions of all time). I am, of course, speaking about “Money Inc,” a tag team IRS formed with “The Million Dollar Man” Ted Dibiase. Boy were these guys meant for each other! Although, I feel like if IRS had ever taken a look at Dibiase’s finances, he would have had a field day (there was a whole lot of cash being thrown around… were the hundreds he stuffed in opponents’ mouths deductible?). These two rose about as high as a tag team can rise, winning the belts on three separate occasions (against LOD, the Natural Disasters and the Steiner Brothers), and had a very memorable feud with the very unmemorable Mega Maniacs (Hogan and Beefcake). They disbanded shortly after the end of their third title reign, but it was sure fun while it lasted.

I know what you’re thinking… this gimmick was great! It was way over, the fans loved hating it and it got Rotunda some championship gold that was severally lacking in his WWF career. I agree with all of those sentiments. Looking back on the late 80s and early 90s, a much more cartoonish world of professional wrestling, this is among my favorite heel gimmicks. I still will never understand how someone would go from being a taxman or accountant to being a WWF wrestler (D’Lo Brown excluded). Remember his terrible theme music? It was just the noise of one of those adding machine things that accountants used back in the day (I always thought it was a typewriter when I was little)! It was so annoying. You just knew this guy with the annoying clickety clackity “music” was coming down the aisle to yell at you about deducting your church donations and what not. Ugh!

Another question: why would you wrestle in a shirt, tie and business shoes? Did his life as a taxman not provide him with enough disposable income to buy himself some wrestling tights and boots? Was he constantly arriving to the arena late and unable to go to the locker room before matches to change? I can’t tell you how many times wearing that tie came back to haunt him. Good guy wrestlers loved throwing him around by that thing, or choking him with it. Looking back on his career, he must wish he’d gone with a clip-on instead, right? Nothing on his ensemble looked comfortable, threatening or anything you want a wrestling uniform to be. Also, the irony is that he probably could have deducted any tights or boots as a business expense. Wearing tights would also have cut way down on his dry cleaning bill, I imagine.

Anyway, IRS is another example of a gimmick that was perfect for it’s era. In fact, WCW tried to sort of recreate it when they signed him in the mid-1990s, when Rotunda wrestled as V.K. Wallstreet (also Michael and Mr. Wallstreet), some kind of day trader gimmick that didn’t really catch on. The IRS (and the Wallstreet one, for that matter) gimmick would never work now in that exact iteration (you could maybe see the authority having an accountant, but it would be tough to sell him as a wrestler), but I still love it, and I still make sure to pay all of my taxes to this day, just in case Irwin comes after me. He still makes sporadic cameos on WWE TV from time to time, so I know he will find me if I stray. By the way, you can also see plenty of his two sons, Taylor and Windham Rotunda, who wrestle in WWE today as Bo Dallas and Bray Wyatt, respectively.