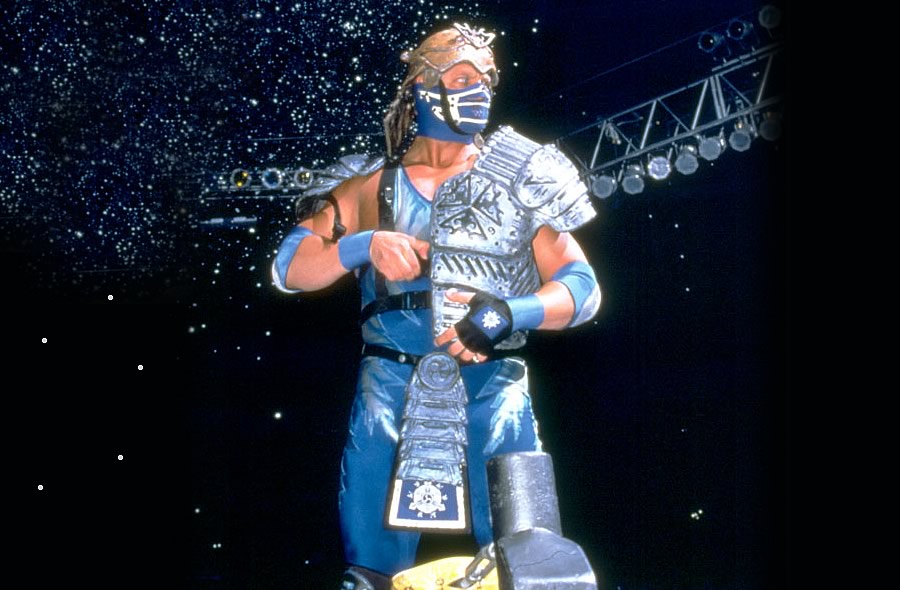 [dropcap]I[/dropcap] said Brrr! (clap, clap, stomp) It’s cold in here! There must be some Toros in the atmosphere! I said–what? What’s that you say? No Toros? Just an icy martial artist with no charisma in a Mortal Kombat suit? Oh. Well that’s kinda crappy, no? Yes! And that’s why we’re inducting former WCW superstar Glacier into the Bad Gimmick Hall of Fame today. Welcome Glacier!

As always, let’s first meet the man behind the gimmick, Brunswick, Georgia native Ray Lloyd. Despite never really appearing that dangerous in a WCW ring, Lloyd was actually a skilled martial artist growing up, even enjoying a successful professional career in the World Karate Association in the early and mid 1980s. Eventually, he was bitten by the professional wrestling bug and began performing as “Sugar Ray” Lloyd in the Georgia independents. He worked his way up to a spot as a jobber with the NWA in 1989, which was his first big break. From those early runs as a jobber, he got hooked up with the Great Muta and a Japanese promotion named UFWI, where he enjoyed a few years of success before the company folded in 1996. That’s when WCW came calling, but this time with a real promise of a huge push.

Eric Bischoff dug deep into Ted Turner’s pockets and paid a rumored $35,000 to build a suit for a new character he had in mind. He also spent a rumored $500,000 on theatrics, pyrotechnics and lighting for this character’s new entrance. The entrance was actually pretty cool, with excellent lighting and even fake snow that fell throughout the arena (that stuff ain’t cheap). They also had a bunch of creepy and well produced vignettes for the character, which I’m sure cost a pretty penny. These ran for literally months before Glacier debuted, in order to hype the character. WCW even cooked up an absurd back story, where Glacier was an American who had gone to Japan to study a fighting style that combined martial arts with professional wrestling (kind of like a Bruce Wayne, but with a stupid made up fighting style that made no sense). The helmet he wore was 400 years old, and had been passed down to him by his instructor (was it the Snow Miser?), along with his name, which symbolized the power of the elements. So… Ray Ray from Georgia went and got him some of that karate learnin’ and came back as one of them ninja fellers? Really, WCW?

The real problem, which we alluded to earlier, was that this character was a blatant ripoff of Sub-Zero from Mortal Kombat (at least it wasn’t Sub-Zero from The Running Man). Even worse? Mortal Kombat was already four years old when this gimmick debuted. The video game, and the controversy around it, swept the nation in 1992 and 1993, when it first came out. By the time Glacier debuted, Mortal Kombat was yesterday’s news, which is what Glacier soon became. The ironic part of all of this is that WCW could have tried the exact same gimmick just a few years earlier, and it might have been a huge hit. Had Glacier debuted when the Mortal Kombat controversy was truly hot, it would have been much more cutting edge stuff. By 1996, however, audiences were tired of having cartoon characters shoved down their throats, and were ready for a more realistic product. Also, Mortal Kombat was fairly tame by then too, as similar things flooded the market, and audiences became desensitized. To put it in perspective, the Outsiders, Hall and Nash, debuted just a few months after Glacier, and completely changed the industry because they were realistic. How is a big white guy from Georgia supposed to be realistic as a frigid mysterious ninja from a four year old video game? Let’s face it, Glacier was dated and stupid. Expensive, but dated and stupid.

To their credit (or due to their lack of intelligence), WCW didn’t fold on their idea when the audience farted all over Glacier. Probably because they had already sunk so much money into the idea, they stuck with it, and even gave Glacier some equally ridiculous rivals to fight against. There was Mortis (basically a ripoff of Reptile from Mortal Kombat, especially when compared to Glacier), played by Chris Kanyon, and Wrath, who was another ridiculous ninja type gimmick played by Bryan Clark (aka WWF’s Adam Bomb). The feud between the three was called “Blood Runs Cold,” but it might as well have been called “Ratings Run Cold,” am I right?? Anyway, the fans didn’t dig any of this, and Glacier was left to flounder around WCW Thunder and WCW Saturday Night for the rest of his career, retiring from the ring after the company was bought out by Vince McMahon.

So yeah. All the fake snow and blue lighting couldn’t save this gimmick from being shit upon by the paying public. WCW didn’t quite yet understand their audience–something they would soon remedy–and it cost them. Literally. Half a million dollars for this big blue ratings killer. To steal a line from Arnold Schwarzenegger in The Running Man… “Sub-Zero? Now plain zero!” Welcome to the BGHOF! At least it seems he got to keep the suit…

Check out Glacier’s debut match against “The Gambler,” a pantsless wild west card player. Look at those kicks though! Hi-yah!