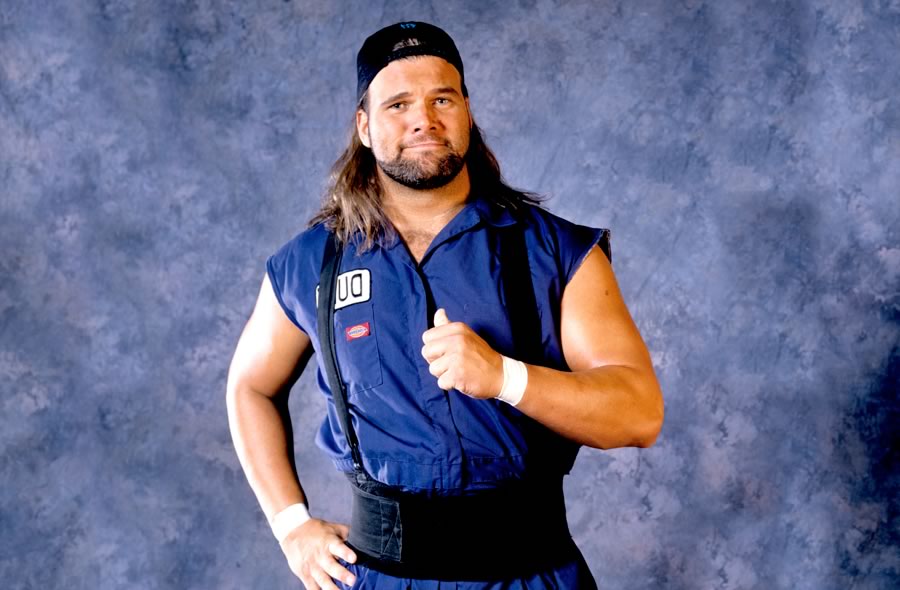 [dropcap]T[/dropcap]his is another WWE gimmick that I actually enjoyed as a child. The friendly neighborhood garbage man! I have since realized that it was pretty damn terrible, and that it was a complete waste of time to put this 6’6″, 305 lb behemoth in such a terrible role, so this gimmick made our list. Ladies and gentlemen, our latest inductee into the Bad Gimmick Hall of Fame, Duke “The Dumpster” Droese!

As we do in all of our BGHOF post, let’s first meet the man behind the gimmick. Mike Droese was born in Lodi, California in October of 1970. Droese eventually moved southeast and wrestled in the Florida independent circuit throughout the early 1990s. He soon began wrestling as “Garbage Man,” and eventually got noticed by the people in New York (actually Stamford, CT… but who cares). So, really, he brought this gimmick on himself, and we should feel no sympathy, but the WWF definitely took the gimmick and pushed it to eleven, as they were wont to do back then.

McMahon gave Droese his new name Duke “The Dumpster,” a sleeveless garbage man’s uniform (eventually one with a bunch of little garbage cans on it, because what else would a garbage man wear?), a backwards hat and a pair of those gray gloves everyone’s dad has in the garage for when they work on stuff outside the house (you know the ones). They named his move, which was kind of a mix of the Bossman Slam and the British Bulldog’s power slam, the Trash Compactor, because… well, garbage puns! It was just a slam of sorts, it didn’t crush his opponent into cubes or anything. You’d think the Trash Compactor would be more of a bear hug type submission hold, no? Why not a diving head butt called the “Dumpster Dive?”

Anyway, Duke’s theme music even started with the sound of a garbage truck in reverse. Good commitment to a gimmick, WWF! Like IRS before him, just pick the noise that something in his profession makes. Just to hammer home the point that he’s a garbage man. Otherwise, we might not have known for sure. How believable is a wrestling garbage man if he doesn’t have a truck? How else would he carry all his garbage around? What if they’d played the sound of garbage bags rustling? No, Jobu! That would have been terrible! Not like a beeping truck. That’s gold. Listen to it now:

Let’s also talk about the terrible vignettes that led to Duke’s WWF debut, shall we? They were god awful. The ones that stick out to me the most were the one where he talked about how he was coming to the WWF to “take out the trash.” That’s kind of literally all he did there, although that’s not a very nice thing to call the Brooklyn Brawler. Maybe the WWF was just really clean? In other vignettes, he was seen doing regular garbage routes, picking up people’s trash cans and throwing them into his truck, all the while singing about how much he loved doing his job and taking out the trash. I’m sorry, but no garbage man is gonna sing a song about how much he loves taking out the trash. He might be happy with his work and happy to be outside, but who the hell likes rifling through garbage? Did Roc ever look happy to be rooting through garbage? Not even when he found a new lamp.

That’s another thing I never got about these types of gimmicks. Like IRS, did Duke not have time to go home and change when he got off his garbage man shift? Were we, as fans, supposed to believe that he was really a regular sanitation worker by day that just wrestled on the weekends? Duke even brought his garbage can to the ring, and never used it as a weapon. Did he bring it because he thought someone would steal it if he left it in the locker room? Also, if he had shown up in his outfit without the trash can, would that have ruined the credibility of the gimmick? If Duke wrestled in regular wrestling gear, but put a garbage can on his trunks or boots, and the announcers told us that he was a garbage man by day, would that have made it stupid? Why the hell would someone choose to wrestle in a stinky garbage man’s uniform and clunky boots when they could wear normal wrestling gear? Can Vince answer these questions??

Anyway, because of his size, ability and “working man” character, Droese was a fan favorite right away. Early on in his run, Duke was involved in a feud with color commentator Jerry “The King” Lawler. The most notable instance of this feud was in June of 1994, when Lawler had Droese as a guest on The King’s Court (see it below), and ended up hitting the garbage man in the head with his own trash can. I know that doesn’t sound like a big deal, but this was 1994. We were in the lollipop and gumdrops era of the WWF, and Lawler ended up having to apologize for his actions on national television.

That was really the last interesting thing that “The Dumpster” ever did. He never held any titles and his only other notable feud was with the then Greenwich blue blood, Hunter Hearst Helmsley. Also, his career probably wasn’t helped by the fact that Vince, along with the other WWF announcers of the day, basically made as many garbage related puns as they could, for however long his matches were. Seriously, it’s like they were having a competition for who could fit in the most puns. By 1997, Droese and the WWF parted ways and he returned to the independent circuits and smaller federations throughout the country, including the FCW (before it became a WWF breeding ground). He did make one more WWF appearance, at the Wrestlemania X-Seven gimmick battle royal, but, like all his other big WWF matches, “The Dumpster” was dumped (see what I did there?) over the top rope. You think they could have done something better with a guy that size, but that’s what they chose to do with him.

At least it got him a spot in the Hall. Welcome Duke “The Dumpster” Droese!

The Dumpster appears on The King’s Court:

One thought on “Bad Gimmick Hall of Fame: Duke “The Dumpster” Droese”