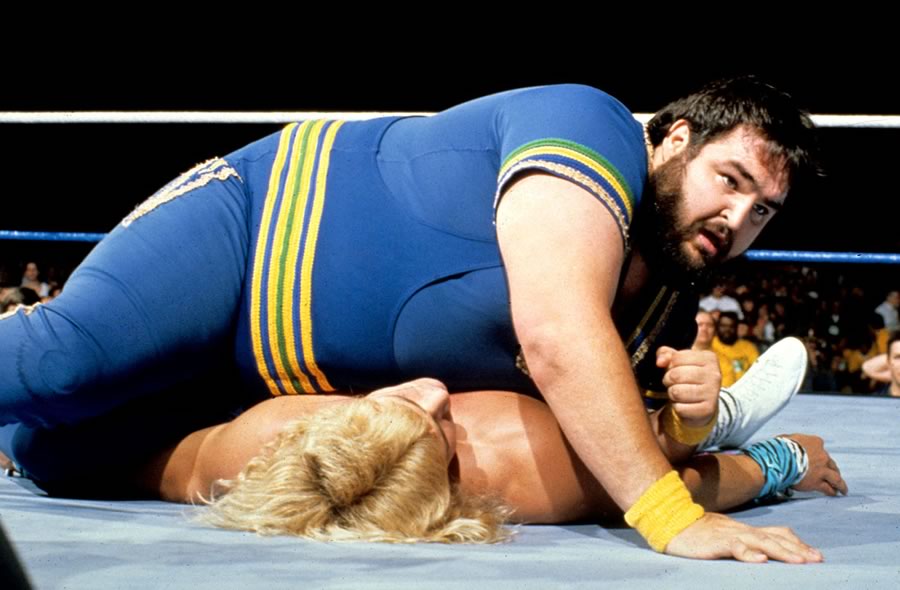 Note: I originally posted a version of this on the Camel Clutch Blog. You can read the original there, if you like:

[dropcap]N[/dropcap]othing says “Africa” like a 6’9″, 457 lb white guy with a beard. Am I right? That’s what Vince McMahon was apparently thinking when he made the decision to repackage one of his wrestlers with this now infamous gimmick. It seems The One Man Gang, a big fat biker with an attitude, simply was not getting sufficiently over with the WWF fans, and a change was in order. What did the brain trust at Titan come up with for George Gray (OMG’s real name)? “I know!” they said, “Let’s have him rediscover his African roots and turn him in to Akeem, ‘The African Dream!’” Today, we induct Akeem into the Bad Gimmick Hall of Fame.

Here’s a little bit of the history of our friend George Gray, for those of you youngsters who are unfamiliar, or those of you who wised up and blocked Akeem from your memories. Gray was born in 1960 in Spartanburg, South Carolina (Madness? This! Is Spartanburg!!), and trained to be a professional wrestler with Chief Jay Eagle in the local territory. After a couple of years appearing the independent scene as Crusher Broomfield, he eventually adopted the gimmick of the One Man Gang (the aforementioned fat, smelly, mean and mohawked biker), and eventually garnered himself enough attention to sign with the WWF.

He debuted there in 1987 as the One Man Gang with Slick, who was basically a sleazy pimp-type grifter (this was before he found the Lord and became Reverend Slick), as his manager, and began crushing jobbers like there was no tomorrow. His higher profile matches, namely the main event of the first Survivor Series and some television main events against “Macho Man” Randy Savage and against the Hulkster himself, usually ended with the OMG on the short end of the stick, but he did alright for himself.

Suddenly, in April of 1988, Slick announced that the man formerly known as the One Man Gang had found out that, secretly, he was from Africa! What are the odds of that? I still remember the video, and you can watch it below, of the unveiling of the man we would come to know as Akeem. “Mean” Gene Okerlund shows up in a scummy looking alley, where he remorsefully admits that Slick was supposed to take him to deepest, darkest Africa, but this location was certainly not what he was promised. In actuality, this segment was shot in an alley in downtown Stamford, CT (my neck of the woods, as well as the WWF’s), but that doesn’t matter. Slick brings out a bunch of African dancers (the whole scene is filled with a lot of casual 1980s racism), and the man himself, Akeem! Mean Gene immediately recognizes him as the One Man Gang (at least they didn’t try to pass him off as a new person), but Slick ensures Gene that the One Man Gang is a new man. They then walk away in what I’m sure back then was perceived to be a “ghetto/hood” kind of way.

For comedy’s sake, this is one of the best gimmicks of all time. Here’s a giant white guy, who was on a motorcycle last week, now wearing a Dashiki and wrestling tights with Africa on the back, and talking “jive” (I believe that’s what passed for African in the late 1980s). Then, there’s the hand movements. Apparently, African people move their hands around like they’re swimming through the ocean while they talk their native jive, because Akeem never stopped. You have to love the political incorrectness of professional wrestling before the 1990s. Sure, it’s a little racist and a little insensitive, but it’s a lot of funny. It’s actually rumored that this gimmick was meant as a direct shot at Dusty Rhodes, who spent the better part of his career being billed as “The American Dream,” and was hugely popular amongst the African-American demographic. If you watch and listen to Akeem, you can definitely see a bit of that old Dusty influence. Wherever the idea came from, there’s no chance in hell this gimmick would ever fly in 2015. The lawsuits would pile up higher than Akeem’s yellow African hat.

The best part of this gimmick is that it actually got pretty over. There was no Internet back then, and I didn’t know of any pro-wrestling publications, but I remember loving this gimmick. Remember the “Jive Soul Bro” theme song? It was just so epically bad, that we loved it. Even though Akeem was a bad guy, my brother and I would imitate his walk and his manner of speaking (We may or may not still do this from time to time), and we loved watching him lose to Hogan and Macho. Akeem was also part of one of the more feared tag teams of the era (with The Big Bossman as the Twin Towers) and was right square in the middle of one of the biggest feuds of the 1980s, when the Mega Powers Exploded.

We will never see a gimmick like this again (One Man Gang eventually came back when Gray signed with WCW), at least on a nationally televised wrestling company, but it is definitely worthy of the Bad Gimmick Hall of Fame. Congratulations, Akeem!