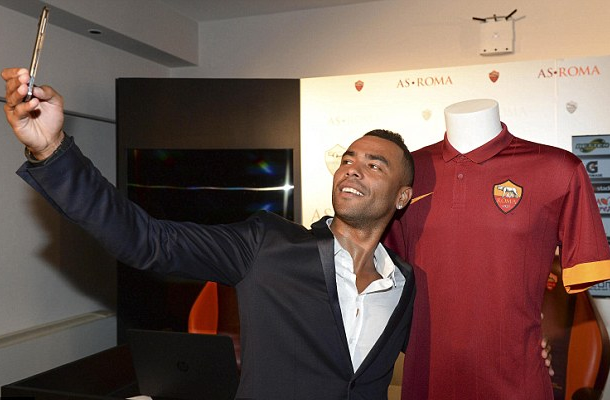 I missed this story back when it happened in July, but thankfully, it has come back around a bit and I can now talk about it. England international Ashley Cole, once considered among the best defenders of his generation and one of the best Left Backs of all time, signed with Roma of the Italian Serie A this summer amid rumors that he might be heading stateside to MLS. On his way to Italy, he took a big shot at MLS, basically calling the league a vacation destination. Well, now it seems that the former world class defender is unhappy with his Italian situation, and might be crawling back to MLS come the winter transfer window. Nice work, Ash.

So that we’re all informed about what’s going on here, let’s take a deeper look at the story. Cole “left” Chelsea this past off-season after eight seasons and 229 caps for the blues (he also spent seven years at Arsenal and Crystal Palace, earning 170 more Premier League caps). Like with Frank Lampard‘s departure from Chelsea, we use the word “left” very loosely here. Not to take anything away from the 33-year old Cole, but he’s reaching the twilight of his career, and Chelsea probably just wanted to move on, as they had already given his starting job to César Azpilicueta last year.

That’s when the MLS rumors began. Specifically, there was some belief that Cole would join Thierry Henry, his former squad mate at Arsenal, on the New York Red Bulls. For whatever reason, that didn’t come together. That’s when Cole opened his big mouth. Said the defender:

“I had offers from the USA, but I’m not ready to relax on a beach yet. I’ve won a lot in my career already, but I don’t want to stop.”

Well excuse me, Mr. Cole. I didn’t realize MLS contracts were signed through Club Med and came with a free umbrella drink. Cole is lucky he said this in July, and not last week, or MLS commissioner Don Garber would have had to hold another demanding press conference. I know that MLS is not yet on the level of the Premier League, nor do I necessarily think it ever needs to be, but how ignorant is that statement? MLS is a highly competitive league. Not only did Cole take a shot at everything American soccer stands for, he also indirectly took a shot at a couple of his former teammates, like Henry and Lampard, who signed with MLS as their careers wound down. Lampard was asked about Cole’s tasteless comments and said the following:

“Everyone has their own opinions of where they want to go. Being here now [in MLS], I wouldn’t want to go play on the beach either because I’m here to play serious soccer and try to win something. It’s Ashley’s opinion on it and he’s gone to a good club, and it should be a great experience for him. This is going to be a great experience for me, I hope, and it certainly isn’t lying on the beach.”

Boom. That’s the kind of guy we need coming to MLS from Europe, right? A guy that understands that, while the world’s eye might not quite be on MLS just yet, the league has grown exponentially over the last few years (keep in mind the league is still in its relative infancy), and does provide a great place for world class players to play competitive soccer, albeit in their lean years. Thank you, Frank Lampard. We don’t need a delusional elitist like Cole filling our league with the stink of ignorance (it’s pretty stinky).

Anyway, I say good for Cole. At least he is enjoying his Roma stint, winning games and contributing to the first team, right? Uh, wait, what? What’s that you say? 135 minutes all season? Pulled at halftime during a 7-1 Champions League loss to Bayern Munich in which he was made to look like Natalie Cole during her heroine years all game by Arjen Robben? Moping about the practice field and not getting along with teammates? Desperate to leave? Uh oh, Ashley. Are we not good enough for the top flight competition and longing for somewhere where we can still look like we know what we’re doing on a soccer pitch?

I, for one, am not sure how I feel about Cole possibly crawling back to MLS. In one sense, he would probably still be good enough to help several MLS clubs right now. On the other hand, he’s an ignorant dick who clearly sees our league as being below him. So why would we welcome him here now? I do hope that, if he does come to The States, that a couple of strikers hand him a nice welcome kick to the shins or two as he adjusts to not only a new league and country, but to the oh so bitter taste of crow.

5 thoughts on “Ashley Cole: Bit of a Dick”