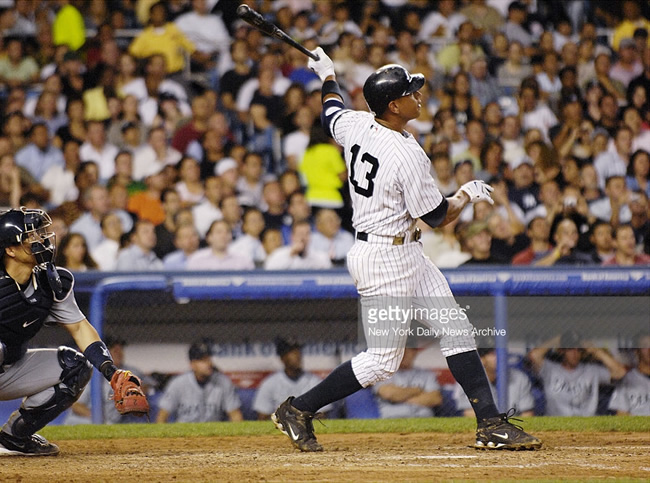 If you haven’t figured it out from the title, this one’s a little more obscure, because it happened at a random game that I went to, and not in a really at an impactful moment for the team. That being said, it’s one of the most impressive things I’ve ever seen in person, so I had to write about it.

Allow me to set the scene: It was 2007, and my buddy Matty V had his college buddy, Ryan, in town for a visit. We decided what better way to welcome the young sir than with a trip to the stadium to watch the Yankees?

Anyway, I took the train in, met up with Matty V, Ryan and another buddy or two, and we headed to the Bronx. We ended up seeing a blowout for the good guys, and this magical moment from Alex Rodriguez.

It was September 4th, and the Yankees were trailing the Red Sox in the standings–but leading the Wild Card race–and Alex was having an absolute monster year. Coming into the night, he was hitting .308/.414/.639 with 45 home runs, with about a month left in the season.

Looking to extend their Wild Card lead and possibly close the gap on the Sox, the Yankees sent Chien-Ming Wang to the mound against Horacio Ramirez and the Mariners. The game started out as a pitching duel, as the Yankees took a 1-0 lead on a home run by Jorge Posada in the bottom of the second. For his part, Alex was having a quiet game.

With the score still 1-0 in the bottom of the sixth, having grounded out in the first inning and hit into a double play in the third, Alex stepped up to the plate for the third time, looking to spark a deciding rally.

He worked the count full, and then promptly ended Horacio Ramirez’s career. OK, so Ramirez went on to pitch several more seasons, but the league hit .583 against him the rest of that year, and he moved to the bullpen forever after the 2007 season (save for one spot start as an Angel in 2009). I don’t think he ever intimidated anyone ever again after that fateful 3-2 pitch.

Now, we were young professionals still trying to make our ways in the world, so we were sitting in the upper deck, on the third base side of the stadium down the third base line. The cheaper ticket prices allowed us to save a little dough, which we promptly spent on beers at the game. Hey, priorities! Anyway, I don’t remember the pitch. I don’t remember the swing. What I do remember, is looking straight up to the sky to find the baseball when it came off Alex’s bat. Remember that we were in the upper deck. We still had to crane our necks to see how high this ball was hit. I remember we basically stopped talking. Someone might have said “holy shit,” but we watched mostly quietly as the ball sailed down the left field line and landed in the upper deck.

I’d only seen a couple of people even hit a ball up there on TV (Jesse Barfield randomly comes to mind, although i don’t remember any specifics about that home run either). When it landed, the buzz around the stadium was electric. People could not believe what they’d just seen. According to the ESPN home run tracker, the ball only traveled a “true” distance of 408 feet, but to us, it might as well have landed on the moon. We were giddy with laughter just talking about the sheer massiveness of the homer. Because we’d been doing the chicken impersonations from Arrested Development all afternoon and evening, we ended up dubbing the homer “The Coo Co Ca Shot”–we still laugh about it to this day.

Alex went on to finish the season with 54 home runs–the most ever by a right-handed Yankee–and 156 RBI. For good measure, he stole 24 bases and scored 143 runs. The voters had no choice but to name him the American League MVP that year. Later, the steroid allegations kind of tainted all of his big number seasons, and the shine was taken off of his accolades a bit.

I’ll never forget that homer, though.