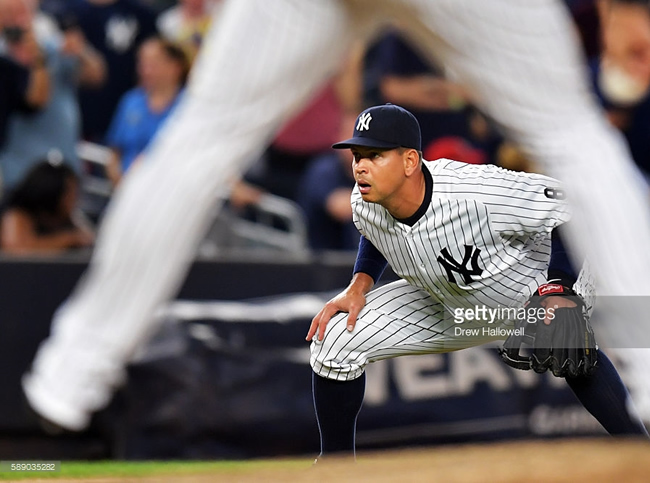 As you might know if you celebrated AROD Week with us, I was in the house for Alex Rodriguez‘s last game as a Yankee. While Alex didn’t hit a home run like I was hoping, he contributed to a big win, and provided plenty of fun moments.

Let’s take a look at one last AROD’s Most Memorable moment, his last hit as a New York Yankee.

Surprisingly, the Yankees came into this game just 3.5 games out of the second Wild Card spot. That means that, while realistically they probably won’t make it, if they keep winning… I guess you never know, right? That added to the AROD buzz that was already filling the stadium, and gave the game another level of excitement.

Anyway, the Yankees had veteran–and probably the next guy to retire, or leave the team–CC Sabathia on the hill, while the last place Rays countered with their young fireballer Chris Archer. After Sabathia allowed a solo homer in the top of the first, the Yankees came to bat in the bottom of the inning.

Alex was in the lineup batting third, so we were guaranteed to see him right away, which was exciting. Brett Gardner was hit by a pitch to start it, and Jacoby Ellsbury struck out. That brought up Alex.

The 41-year old designated hitter, making potentially the last start of his career, worked the count to 2-2. On the next pitch, Archer threw a 96-mph fastball on the outside of the plate, and Alex did to it what he’s done to hundreds of those types of pitches throughout his career–he went with it the other way, lacing an RBI double into the gap to tie the game at 1 (side note: where the hell was Steven Souza playing on that pitch? Watch the video and tell me.).

If you can read lips, you know Alex yelled a big “Fuck Yeah!” when he got to second base. In the stands, so did we. You could tell how badly he wanted to contribute in his last game, if only to show the Yankees that he can still help. We wanted that for him. Short of a home run, that was the perfect result for his first at bat of the night.

The Yankees, meanwhile, played a very exciting game. They were down twice in the game, but came back each time. Starlin Castro had himself a day, going 2-4 with 4 RBI, including a 2-run bomb just to the left of the Mohegan Sun Sports Bar. Interestingly enough, that ball bounced once in the bullpen and into the crowd, where it wound up with a little kid sitting just a few rows in front of me.

The Yankees ended up winning 6-3, but not before Joe Girardi did the right thing one last time too. After a tumultuous week where he was vilified by the press (and this blog) over his handling of the AROD situation, Joe sent Alex out to play third in the top of the ninth for one out. It was for the best. We were chanting “We Want AROD” all throughout the 8th inning, and had the boos ready to go if Alex didn’t take the field.

Overall, this was probably the most fun I’ve had at a game in a long, long time. Thanks to our very own Scott Mason for picking up the tickets as Alex was announcing his retirement last week, just before prices skyrocketted.

We’ll miss you AROD. Don’t be a stranger, and come see us. Even if it’s as a visiting player next season…

Check out some videos I shot from the game: