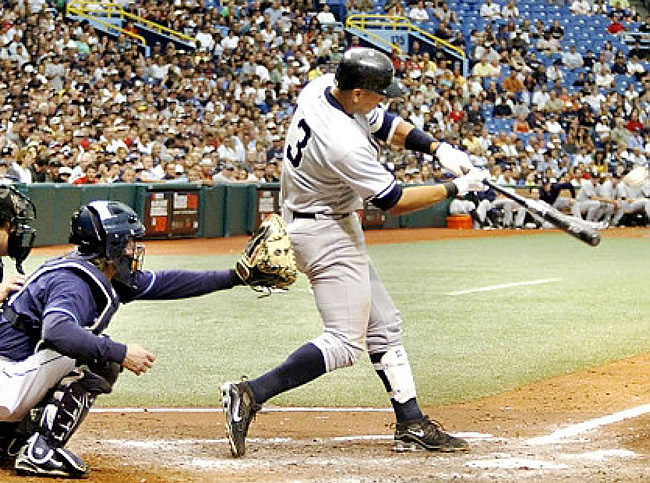 Coming into the final day of the 2009 season, there wasn’t really a whole hell of a lot at stake for the Yankees. They’d already won the division about more than a week earlier, so they really just needed to make sure everyone stayed healthy for October. Yep, just an easy peasy game to get us to the playoffs.

Come on now, you know there’s no such thing as a drama-free game involving Alex Rodriguez, don’t you? As you might have guessed, the Yankees’ slugger had one more regular season trick up his sleeve for this one, and it was freaking awesome.

As the game got underway, one figured Alex was due to play maybe six or seven innings. After all, there was no need to risk another injury right before the playoff push (one in which Alex would feature prominently, as it turned out).

Alex started the game well enough, singling in the first before flying out in the third. Meanwhile, the Rays took a 2-0 lead through five, as the Yankees couldn’t quite figure out how to hit a young Wade Davis. Davis, who’s now on the Royals and is one of the better closers in the game but came up as a starter for the Rays, was dealing, and the Yankees couldn’t seem to buy a good hand.

The top of the sixth started auspiciously enough, with a double by Johnny Damon and a walk to Mark Teixeira. That brought up Alex, who jumped all over the first offering for a 373-foot three-run bomb to deep left. Just like that, the Yankees had a 3-2 lead, and Davis had lost his shutout and his lead.

The Yankees weren’t done yet. Hideki Matsui singled and was lifted for pinch runner Freddy Guzman. After a stolen base, Davis walked Nick Swisher and was lifted from the ballgame so that reliever Andy Sonnanstine could try to stop the bleeding.

Sonnanstine got Robinson Cano to fly out to deep center, but then promptly ran out of bandaids and gauze. Melky Cabrera reached on an infield single back to Sonnanstine, and the righty had an error on the next play that allowed Jose Molina to reach base while scoring Guzman from third to give the Yankees a 4-2 lead. Sonnanstine fought back by striking out Derek Jeter (boo), but Damon got him for another double–his second of the inning–which scored Swisher and Melky.

With the score now 6-2, Girardi lifted Teixeira for pinch hitter Juan Miranda, who was intentionally walked to load the bases for whoever was set to pinch hit for Alex. After all, the Yankees were clearly in shut down mode, ready to rest the regulars, coast to their 103rd victory of the season and start prepping for the post season.

To my surprise, Alex was not removed from the game. It wasn’t until he came up, and I saw his updated stats on the on-screen graphics that I realized he was sitting at 29 home runs and 96 RBI… and the bases were loaded. Surely, Alex wouldn’t hit a grand slam to reach both the 30 home run and 100 RBI milestones in his last at bat of the season, would he? Even he didn’t have that finely tuned a flare for the dramatic, right? I mean, he’d already hit a three-run homer in the inning, for crying out loud!

It only took two pitches for us to get our answer, and for Girardi’s gamble–or maybe he let Alex hit as a courtesy–to pay off. Sonnanstine threw a fastball that caught a little too much of the plate, and Alex blasted it 398 feet into the left-center field seats for a grand slam–then the 18th of his career. The inning ended on the next batter, and Alex was replaced in the field by Eric Hinske when the Yankees took the field a few moments later.

The Yankees ended up winning 10-2, with all ten of their runs coming in the sixth inning–seven of them on two swings of Alex’s bat. In the grand scheme of things, this wasn’t a big game, nor was it an important game.