Warning: "continue" targeting switch is equivalent to "break". Did you mean to use "continue 2"? in /nfs/c11/h04/mnt/193474/domains/jobusrum.com/html/wp-content/plugins/wp-author-box-lite/includes/ReduxFramework/ReduxCore/inc/extensions/customizer/extension_customizer.php on line 478
 Alex Rodriguez Should Play Somewhere Else | Jobu's Rum
Skip to content 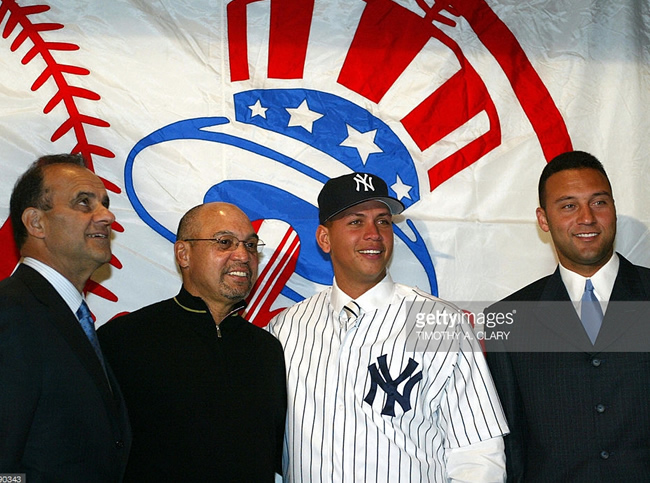 Can you believe it’s been 12 years since this photo? Wow.

Anyway, AROD Week here at Jobu’s Rum has been a lot of fun for me and the crew–and hopefully you readers–but, like all good things, it must come to an end. In all, we’ll have honored #13 with 13 posts, which I think is a fine tribute to this legendary–albeit incredibly controversial and polarizing–player.

Tonight, I’ll be in the house as Alex takes the last swings of his Yankees career. Oh… did you notice that I said “Yankees career?” Hell yes I did. Because I think he should give a big “fuck you” to Joe Girardi, Hal Steinbrenner and Randy Levine by signing with whatever team will take him after he’s released on Saturday.

As El Bolso covered earlier today, the Yankees initially looked to be taking the classy road by offering Alex that special instructor/advisor role and allowing him to play one last home game to say thank you to his fans, but the tune has definitely changed. After promising to allow Alex to play whenever he wanted to, Girardi didn’t play him, using the questionable “we’re trying to win games” excuse. Also, the manager declined Alex’s request to play third base… Why?? He’s already playing for no reason other than to have his last moment. Just put him out there, Joe. Don’t be a dick.

I think it’s all bullshit, although I agree with El Bolso that Girardi probably isn’t acting alone here, and is just trying to keep his job at this point. That being said, he’s really coming off as fed up, overwhelmed and jerky this week. I’ve never seen him quite so snippy with reporters, have you? Someone get that man a drink come Friday after the 27th out.

With all that taken into account, I really think Yankees deserve to give Alex a sendoff and then have him turn around and play somewhere else as soon as he can. So where could he go?

Ideally for Alex, he’d go somewhere that needs a DH. I’ve heard people mention the Houston Astros, and I can’t say I don’t agree that he would be a good fit there. Their current primary DH, Evan Gattis, is hitting .226. They also play in a bandbox with a very short left field porch, which would be beneficial to Alex’s chase for 700 (he only needs 4 more!).

The Twins could be a fit. Their right field porch is short, and Alex has been known to go the other way for home runs a lot. They also have a revolving door of designated hitters who haven’t fared well at all this year. Did I mention that they have zero to play for, and few reasons for fans to come out to the ballpark?

The Marlins are said to be interested, but the issue there is that they play in the national league, where there is no DH. Would the Marlins sign Alex and actually play him in the field? By the time he is able to sign with them, they’ll only have a few games left in an American League ballpark, so they’d have to. Look, we all know owner Jeffrey Loria loves money. The Marlins already had Ichiro reach 3,000 hits for them this year, maybe they want Alex to get to 700 homers with them too. Anything to put butts in the seats and line Loria’s pockets.

There’s one last team on which I think Alex would be a perfect fit. They’re a team with no playoff aspirations, a fanbase that refuses to come watch them play and a DH currently hitting .226 as well. They also play in an area of the country where retired New Yorkers often make it feel like the Yankees are playing a home game when they visit. Did I mention they’ll play the Yankees seven more times before the season ends (after Alex would be able to sign)? That’s right. I’m talking about the Rays.

Can you imagine? I mean can you imagine?? What if Alex signs with Tampa, then comes to town in September and cranks number 700 over that 314 sign down the right field line? Or off the Mohegan Sun Sports Bar window? I’m pretty sure Girardi would tackle Alex to stop him from touching home plate, and then end up flipping his shit and finally committed to the loony bin. It would be incredible.

At the very least, I think Alex’s agent will send out feelers to other clubs as due diligence. If someone bites, Alex should bite back.

That officially wraps up AROD Week. For the rest of the night, I’ll just be a fan watching him play his last game in pinstripes live and in person. It’s definitely time for him to move on, so let’s send him off with a great night!