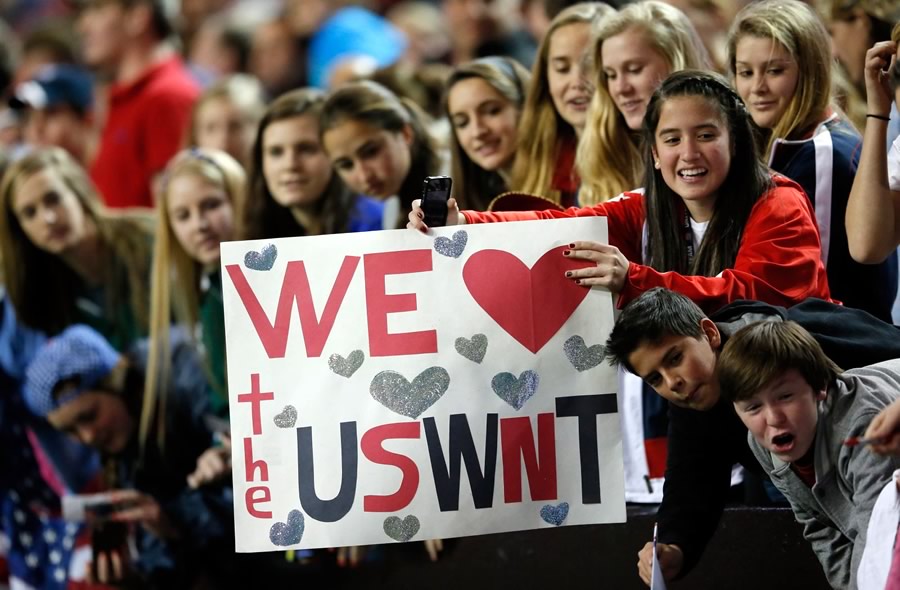 Everybody get out your ‘Merica stuff, we’ve reached the Group D portion of our 2015 FIFA Women’s World Cup group stage preview series! Unfortunately, this is also what is widely considered to be the dreaded “Group of Death,” as it features three different top-10 teams. Yikes! Let’s break it down!

For the last two World Cups, the Matildas, so named because Australia really likes the song “Waltzing Matilda“ (yep, these ladies are no longer known as the Female Socceroos), have finished in the quarterfinals two cups in a row. I think this team could be on the verge of really becoming a world power, and it might just start this year in Canada. I’d like to take a minute here to point out to you that you should be reading this part of the post in an Australian accent, as I am doing while I write it. If you aren’t, please go back and start again. Ok, now that you’re caught up, let’s talk about this team’s reputation. Like Crocodile Dundee before them, this is a team that is considered to be fearless and dangerous. They were a very young side when they made their 2011 run to the quarters, with five players under 20 and an average age of just over 21, so the experience they gained in Germany in 2011, and over the last four years, could help them get far. Let’s just say that this team has certainly played knifey/spooney before, that’s for sure.

Unfortunately for the Aussies, they’re stuck in this group. Sweden and the United States are two of the top five teams in the world, so it won’t be easy for Australia to make it through. They are good enough to beat Sweden and the United States on any given day, but they’re probably looking at, hopefully, one of those coveted third place spots. Although they have a dearth of young talent, notably Fullback Clare Polkinghorne and a young forward named Caitlin Foord, I think their success could most likely run through Forward Lisa De Vanna. The 30-year old is one of the elder statesment of this squad, but her 99 caps and 35 goals should help her keep the rest of her team calm, on the prowl and focused on possibly sneaking a point against one of the big two. You can now stop reading in an Aussie accent, unless you’re really enjoying it. Crikey!

Both currently and historically, Nigeria is the best team coming out of Africa. They are the current reigning, defending undisputed African champions (something they’ve achieved nine times overall), and they are the only country from the continent to qualify for all seven World Cups. Also, they’re nicknamed the god damn Super Falcons. You know what a Super Falcon will do to you in the wild? Let’s just say you should probably wear goggles if you’re around them, Jack! Ahem, sorry… birds of prey excite me. Anyway, where was I? Unfortunately, the Super Falcons have only advanced beyond the group stage once, and it’s looking pretty tough this year too. They’re staring down the barrel at three of the best teams around, and only a miracle will help them.

That miracle, if it exists, will probably come from 20-year old Forward Asisat Oshoala. Oshoala, along with 21-year old Desire Oparanozie, will lead the offensive charge for the Super Falcons (seriously, not even regular falcons… super ones!), and will be the reason they move on, if they manage to somehow do so. Oshoala, who is already being called the best young player to come out of Africa, led Nigeria to the runner-up slot at the 2014 U20 World Cup. In fact, the Super Falcons have finished as the runner-up in two of the last three U20 World Cups. They’re going to need that youth to shine through in Canada. Is the time now? Also, you should be on the lookout for 38-year old Perpetua Nkwocha, the four time African Player of the Year who will be playing in her final World Cup. She’s had quite the career, so hopefully Nigeria can rally around her.

Everybody who beat Germany in 2015 take a step forward! Not so fast, everyone but Sweden! The Blueyellow accomplished that feat in the group stage of the Algarve Cup this past April, with a 4-2 drubbing in Portugal. Sure, Sweden ended up finishing fourth, just behind Germany, and the Germans beat them in the third place match, but that’s neither here nor there. Like Rocky in Rocky IV, Sweden proved that Germany wasn’t a machine, but rather just actual human women that can be beaten. Sweden went on to win all ten of their qualifying games, only allowing one goal in the process (and it was a cheapo penalty kick anyway), and they qualified for their seventh straight World Cup. The Swedish women are bigger and stronger than most of those on other squads, but head coach Pia Sundhage, who, coincidentally, was the USWNT head coach at the last World Cup before “heading home” to coach Sweden in 2012 (DRAMA!), has gotten them to play a slightly more technical style, and that could make them very dangerous. They’re not ranked fifth in the world for nothing.

If you’re looking for a key player, well look no further than 31-year old striker Lotta Schelin. Lotta Schelin? More like… Lotta Scoring Goals Against Everyone (c’mon, amirite?!)! Schelin, who plays her club ball with the French side Lyon and has 129 career goals in 120 matches for them, lit up the qualifying group, scoring 12 times in the ten games. That now gives her now 80 in 149 career caps for her country. She’s got the size, strength and pace to wreak havoc, so everyone watch your biscuits, cuz Lotta’s gonna put them in the basket. You can’t pay too much attention to her though, because the Swedes also have 25-year old Sofia Jakobsson, who led the team in goals during the Algarve Cup and also presents a threat to biscuits everywhere.

United States: The Stars and Stripes

American woman! Stay away from me. American woman! Mama, let me be! That’s what everyone in this group should be singing to this USWNT squad. Unlike the USMNT, the USWNT fans can actually say with conviction that they believe that they will win, because the U.S. are the second best team in the world (for now), and perennial World Cup favorites. There’s no tournament that they can’t win, and there’s no reason to expect them not to make a deep run in this year’s World Cup. Now, they haven’t actually won the big one since 1999, but they’ve never been eliminated earlier than the semifinals. I guess what I’m trying to say, is that they’re going to make it out of this group.

If you don’t know about this team, then I’m not really sure why you’re reading this blog. I won’t get too deep into it because our very own Captain Hatch will be doing a full fledged preview in the next couple of days, but the American women boast some of the best attacking players in the world. They feature names like Abby Wambach (who is one off the all-time World Cup goals lead with 13, and is the leader in overall international goals with 182), Megan Rapinoe, Carli Lloyd and the super clutch Alex Morgan, a 25-year old who plays her club ball for the Portland Thorns. Morgan, who is working her way back from injury, already has 51 goals in 84 USWNT games, and will look to add more to her total in Canada, if her knee holds up. There might be some inconsistency in the midfield for the USWNT, but that’s about the only weakness. Also, I guess you never know when Hope Solo is gonna snap and beat someone over the head with her shoe, which could be detrimental to the team’s chances. She’s an amazing goalkeeper, let’s all hope she keeps it together… and doesn’t read this. She scares me.

The Americans will win the group, because they’re playing in Canada, which is almost home field advantage. I’m sure thousands of American fans will make the trips to go see their women play, so there should be plenty of “home town” motivation for the USWNT. I think Sweden finishes a close second in the group, possibly because of goal difference, and Australia makes it through in one of the third place spots.