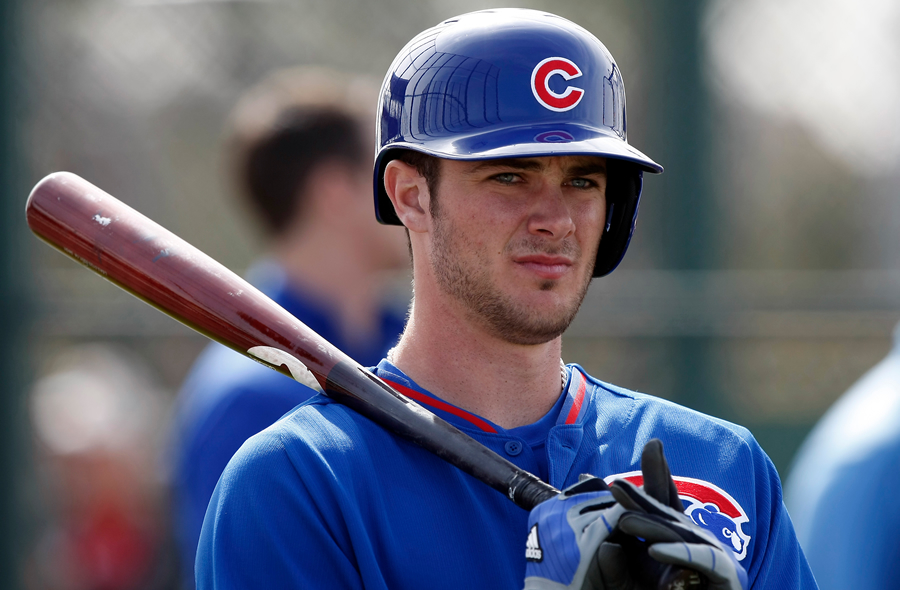 There’s an old fashioned controversy happening in Chicago right now. The beloved Cubbies are in the midsts of a complete rebuild, and their youth movement seems ready to begin, which has people wondering what they’ll do about potential Rookie of the Year candidate Kris Bryant. Let’s break down the most recent news and learn a little bit about Bryant himself.

First of all, to take a line from Enzo Amore of WWE’s NXT, the kid is a certified G and a bonafide stud. He did nothing but mash bombs at the University of San Diego, and the 23-year old Las Vegas native has done nothing but mash in the minors ever since. Bryant had his first full professional season last year, and he basically destroyed everyone in the process. In 138 games spread across AA and AAA, Bryant hit .325/.438/.661 with 34 doubles, 43 home runs and 110 RBI. He also walked 86 times and even stole 15 bases. Wowsers, Penny! The only knock I can find on the 6’5″ Third Baseman is that he struck out 162 times in those 138 games, but who the hell cares?

So far this spring, the Eater of Worlds has hit .435/.500/.1.304 with 6 dingers in 9 games. That’s twice as many homers as anyone else so far this spring. This performance, coupled with his domination of the minor leagues last year, has everyone thinking that this kid is ready for a full time major league gig, especially for a Cubs team that’s in full youth rebuild mode. However, it’s pretty much a guaranteed fact that the Cubs will not bring Bryant with them to the Windy City when camp breaks at the end of the month. Why? Because of free agency rules. If the Cubs wait until April 17 to call Bryant to the big club, they’ll have him for an extra full season of team control. Bryant wouldn’t be elligible for free agency until 2021, instead of 2020. It seems the team thinks that this is not only a good business move, but a good move for the future of the organization.

Guess who doesn’t like what the Cubs are planning to do. Super  Agent Scott Boras, that’s who! It should be no surprise that Boras, who has built a reputation of greed and ruthlessness that, at this point, always seems to enter a negotiating room before even he does, has a problem with this. Boras ranted for 30 minutes to Bob Nightengale of USA Today the other day. Here’s an excerpt:

“You are damaging the ethics and brand of Major League Baseball,” Boras said. “Kris Bryant has extraordinary skills. Kris Bryant is a superstar. He has distinguished himself from all players at every level he’s played.”

“Everybody in baseball is saying he’s a major-league player ready for the big leagues. I have players call me. Executives call me. The Cubs’ people want him there. Everyone says, ‘They cannot send this guy down.’ It’s too obvious.

“This isn’t a system choice. This isn’t a mandate. This is a flat ownership decision. Do they really want to win here?”

Nice drama, Scott! He might as well be Paul Heyman representing Brock Lesnar the way he’s talking (‘My client KRRRRRRRRISS BRRRRYANT!”). Look. Boras is going to do and say everything he can to get his client called up to the big leagues. An earlier call up means more money and opportunities for Bryant, which means more money and opportunity for Boras. I’m not blaming Boras for calling out Cubs ownership here. I hope he knows he’s being ridiculous, though. Seriously. Get the baby his baba already. We’re talking about a few weeks. The Cubbies don’t need to hold Bryant back for three or four months. Relax, Scotty.

Anyway, this lambasting at the hands of Boras caused Cubs GM Theo Epstein to respond, and the former Boston wunderkind gathered all the shade he could carry (he even asked his friends to help him carry more) and tossed it Boras’ way. In a Ken Rosenthal column, he said:

“Kris Bryant’s development path has absolutely nothing to do with ownership, period. As with all our baseball decisions, I will determine where Kris begins the 2015 season after consulting with members of our baseball operations staff. Comments from agents, media members and anybody outside our organization will be ignored.”

BURN! Seriously. Someone get Boras some alo for that before it gets infected. I hope theo sprayed asbestos on that microphone before talking into it, otherwise he might have burned the whole press conference room up. Yikes. All fire aside, Theo is absolutely right. A baseball team cannot be run based upon what the media, fans or even Super Agent Scott Boras™ have to say. They have to make decisions that are best for the present and future, not just whatever appeases people who don’t have anything to do with the organization.

Frankly, I completely agree with holding Bryant back. The Cubs aren’t quite ready for the World Series yet, so 10 or 15 games in April are far less valuable than one more prime season from a guy who could be the best power hitter in the league before it’s all said and done. I still think Bryant’s going to be the Rookie of the Year in 2015 (assuming Joc Pederson doesn’t beat him to it). He’s still probably going to hit 30-35 homers this season… in the big leagues. The fact that he’s not coming to Chicago until late April also won’t stop me from drafting him in fantasy baseball if I get a chance to.

This kid is the man, and you can’t teach that. Watch him pound the Angels below: