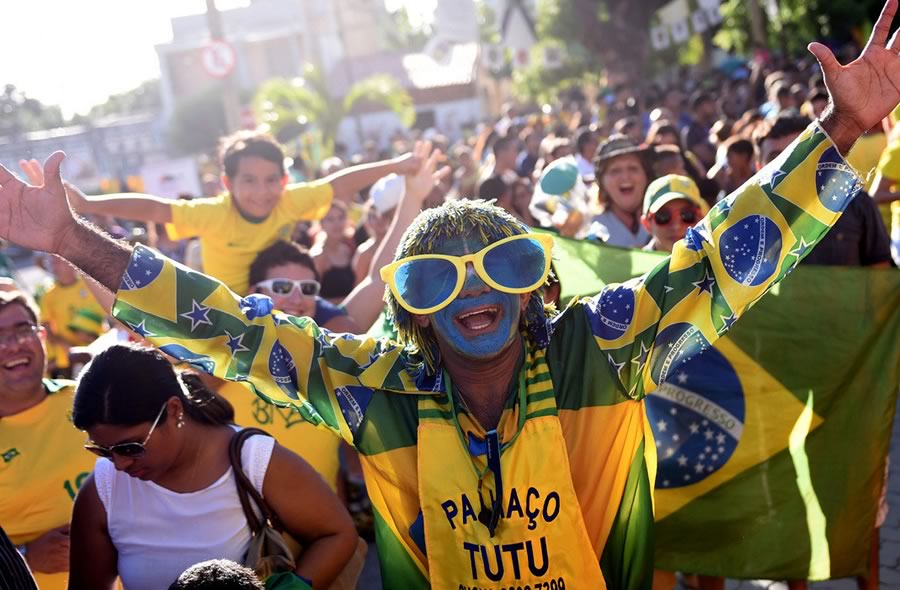 Here we are, folks! The last group preview! Now, we saw last night that Chile opened things up with a big win against Ecuador, but Groups B and C don’t star until the weekend, so there’s still time to go over them and get my predictions in. Group C features an 8-time champion trying to restore its reputation; a new kid on the block of South American powers in Colombia; and Peru and Venezuela, whom no one expects much from, but no one should overlook. Here we go!

The last time Brazil was in an international tournament, they were the hosts. I think we all remember just how ugly that got, as they were clobbered 7-1 by the eventual 2014 FIFA World Cup Champions, Germany, in the semifinal round. New coach, Dunga, was hired, or shall I say re-hired, after Luis Felipe Scolari was run out of town for the embarrassing World Cup performance. I’m not really sure that Dunga is the answer here, as the last time he coached the team, they exited the World Cup even earlier: in the quarterfinals against the Netherlands. Also, apparently everyone hated him because he was a jerk on and off the pitch. So good luck with that, Brazileños!

The one guy that can save Dunga, and the rest of the Brazilian team, is Neymar. Although I don’t think Neymar is quite as good as he thinks he is, he’s still one of the top players in the world. He’s also maturing more and more every year, which has helped his overall game. Unfortunately, as the captain and true face of the nation right now, he’s kind of getting the brunt of all the negativity when the team doesn’t win. Like Lionel Messi will not get out from under Diego Maradona‘s shadow if he doesn’t win a World Cup, Neymar faces a similar fate. Guys like Ronaldo, Ronaldinho, Pelé, will always overshadow him, no matter how many trebles he wins at Barcelona. Hell, even Dunga won a World Cup as a player in 1994. Winning the Copa América won’t mean full redemption for Neymar and Brazil, but it would be a nice start.

Without a doubt, Colombia emerged as a real threat to the establishment during the 2014 World Cup. It was the team’s first cup appearance since 1994. We all remember what happened then, as Colombia entered the tournament as one of the favorites to win the whole thing, but ended up losing to the United States on an own goal and getting ousted in the group stage. The real tragedy came weeks later, when their star defender Andrés Escobar, who had the misfortune of scoring that own goal, was gunned down outside a bar in Medellín. Argentine born coach José Pekerman (how many Argentine coaches are in this tournament? Sheesh!) was brought in to erase that lingering pain, and managed to get his team to an all-time best quarter-finals finish.

Without a doubt, the key man here is going to be James Rodríguez. James (pronounced Hah-Mez, please) came basically out of nowhere last summer to lead the tournament in goals, parlaying his success into a fat contract with Real Madrid. He scored several head-turning goals in Brazil last summer, including two against Uruguay in the Round of 16. It didn’t even matter that Colombia didn’t have Radamel Falcao, who was previously thought to be their best and most indispensable player. They’ll have both James and Falcao in this tournament, which has to make them one of the favorites. They’ll also be looking for revenge against Brazil, who knocked them out of the cup in 2014.

Big surprise, everybody! Peru’s coach is from Argentina! The 57-year old Ricardo Gareca took over from Pablo Bengochea (a Uruguayan) in March, with the hopes of turning around a franchise that hasn’t won the Copa America since 1975, and hasn’t qualified for a World Cup since 1982 (back when West Germany was still a thing). Gareca has coached all over the club scene, but this is his first international job. He famously scored the goal that sent Argentina to the 1986 World Cup and, as a thank you, they left him off the squad that won it all in Mexico. Gareca also has an interesting Colombia connection, as he played for Club América de Cali when they dominated Colombia in the late 1980s. That’s what that drug cartel money will do for you!

Enough about the man at the helm, let’s talk about their key player, Prince. OK, so it’s not actually Prince, but Paolo Guerrero sure as hell looks like Prince. Peruvians are hoping Guerrero puts on his Raspberry Beret, hops in his Little Red Corvette, avoids the Purple Rain and parties like it’s 1999. Let’s Go Crazy! See what I did there? Of course you did. It was hilarious. Anyway, Peru doesn’t have what it takes to win this tournament, or even make it out of this group, but Guerrero is fun to watch.

Venezuela is much more known for it’s Baseball player output than it’s fútbol players. The Vinotintos have not only never won a Copa América, they have finished last in ten out of the fifteen tournaments they’ve been in (they didn’t participate in any prior to 1967), and second-to-last three times. If you want some good news, the only two times they haven’t finished in the bottom two were 2007 (6th) and 2011 (4th). What that tells me, is that the team is improving. Taxed with taking them to the next level–perhaps to their first ever World Cup–is Venezuelan native (he’s not from Argentina!) Noel Sanvicente, who took over the team after their last coach quit last year.

If Venezuela’s going to take the next step, they’re going to need Salomon Rondon to lead the way. The 25-year old scored 20 goals across all competitions during his first season playing in Russia for FK Zenit St. Petersburg, and scored a goal in the 2011 Copa. He’s primed to have himself a good tournament, and maybe raise some more eyebrows abroad.

I’ll keep this one short and sweet. Brazil will win the group and Colombia will finish second. Unfortunately, if you’ve been paying attention, both of my third place qualifiers have been chosen from the other groups, so that means Peru and Venezuela go home.