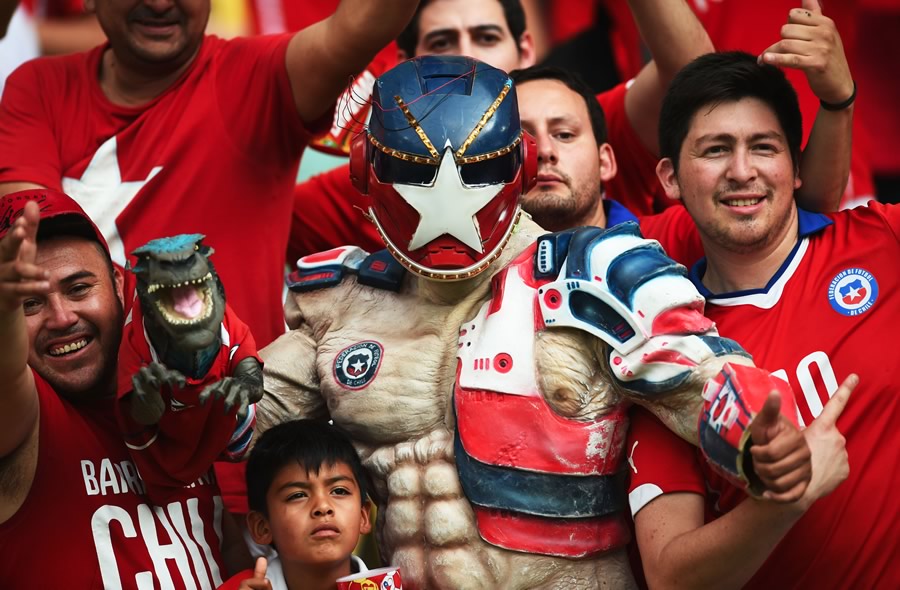 Much like we do for every major tournament, I’m going to break down the groups for you guys, so you can get an idea of who’s who in this tournament, and who has the best chance to win it all. Today, we’re gonna start with Group A, because I like order and despise chaos. In this group we’ll find three teams that have never won the tournament; including hosts Chile and CONMEBOL’s favorite guest Mexico (they must like do their own dishes, make their own beds and not leave trash anywhere…great house guests!) and Ecuador; and Bolivia, who won it all as hosts in 1963. Four squads and only one championship? Ew. Let’s take a look anyway.

No fun nickname for the Bolivians, probably because they have only finished anywhere in the top four once since they won the whole thing as hosts in 1963. Coincidentally, that was a second place finish in 1997, when they also hosted it. I guess they like that home cooking, and very little else. At least they have that title, which is more than the other sad sack teams in this group have (note: I hesitate to include Mexico in the sad sacks, because this isn’t their tournament). Despite that, this team is not expected to do much at the Copa, where they haven’t gotten out of the group stage in five tries. They haven’t made a World Cup since USA ’94 either, so there really isn’t much of a pedigree for success there.

Their key player is Marcelo Moreno, a 27-year old striker currently playing his club ball at Changchun Yatai F.C. of the Chinese Super League. Moreno is one of only six players on the current roster that plays abroad, and the only one who has more than three goals for the national squad. And it’s not like this is an exceptionally young team, either. Needless to say, I think we have our Group A bottom. There simply isn’t much for head coach Mauricio Soria, a former national team goalkeeper, to work with. Sorry, boys.

What’s with the team nicknames in this group, eh? The Reds? Boo, I say. Boo. Like Bolivia before them, Chile doesn’t have a whole heck of a lot to write home about when it comes to their fútbol history. Always a bridesmaid, never a bride. La Roja have finished second overall four times, but not in the last 28 years. They have continuously come up short in big tournaments. Last summer, they were inches from a humongous upset against Brazil in the Round of 16, but Mauricio Pinilla’s shot just before the end of extra time hit the crossbar, and the World Cup hosts ended up winning in PKs.

This is a team that, under Argentine coach Jorge Sampaoli, has really seen it’s attack develop. Alexis Sanchez is, by far, their biggest threat, but the Arsenal forward isn’t their only potential star. They also feature midfielder Arturo Vidal of Juventus, defender Gary Medel of Inter and Barcelona goalkeeper Claudio Bravo, so it’s not like they’re Bolivia or anything. They have legitimate players with legitimate talent and a coach that preaches attack and defense. So what happens to them on the big stage? Whatever it is, maybe it won’t this year, since they’re hosting. They shouldn’t have any trouble coming out of this group, so at least the home fans will have that to cheer for.

Unlike Chile and Bolivia, Ecuador couldn’t settle on just one color for their team nickname, so they went with three of them, naming themselves the Tricolor (specifically, yellow, blue and red). Like Chile, Ecuador has never won a Copa América tournament, but their best finish is fourth, which they’ve done twice, but not since 1993. Here’s an interesting note about coach Gustavo Quintero: he was born in Argentina, but took Bolivian nationality after playing his club fútbol there. He even represented Bolivia in it’s last World Cup in 1994. Now he’ll be trying to oust his adopted homeland, against a coach from his native homeland. DRAMA!

Despite the presence of Swansea City’s Jefferson Montero on the roster, the key man for La Tricolor is definitely West Ham United’s Enner Valencia. Valencia has a very successful track record, winning the Ecuadorian Serie A with Emelec, and the Liga MX Golden Boot for Pachuca in the 2014 clausura tournament. This past season, the 25-year old scored four goals for the Hammers in his Premier League debut season, helping the team to a surprising 12th place finish despite some inconsistencies on the pitch. The offense will certainly run through him, so they need him to get it going in Chile. However, this is an injury depleted squad that will have trouble coming out of the group.

Normally, you’d think that Mexico–also with the Tricolor nickname–would be a pretty tough team to beat, considering they boast international superstars like Javier “Chicharito” Hernández, Giovani dos Santos and 2014 World Cup hero Memo Ochoa, as well as solid local veterans like Oribe Peralta. Well guess what? None of those guys are coming! Mexico, who isn’t a member of CONMEBOL and comes because they’re invited every year, usually don’t send their best squads to this tournament, and this year is no different. Coach Miguel Herrera, he of Super Sayan Gif fame, chose instead to hold those guys off for the CONCACAF Gold Cup later this year, and brought along a younger squad to Chile.

The only exception is 36-year old defender Rafa Marquez, who currently plays for Verona in Italy’s Serie A, and is one of the better known Mexican players in the world from his time in Barcelona. The key player for this squad, however, is Attacker Raúl Jiménez. Jiménez, who became a star in Liga MX’s Club América and made the jump to La Liga with Atlético Madrid after last year’s World Cup, is one of only three international players (with Marquéz and Twente’s Jesús Manuel Corona) making the trip to Chile for this tournament. I think the players Herrera brought over should probably help them compete for the second spot in this group, but I’m not sure this team can do much more than that.

Until I saw who Miguel Herrera was bringing to the dance with him, I was all set to pick Mexico to run away with this group. Instead, I have to go with the hosts, as I think they are, by far, the best team in this group. I don’t know how much that actually means considering their company, but Chile will win Group A. I’ll say that Mexico takes second place, because Herrera’s passion will probably carry them there. Ecuador will move on with the third place finish, though.