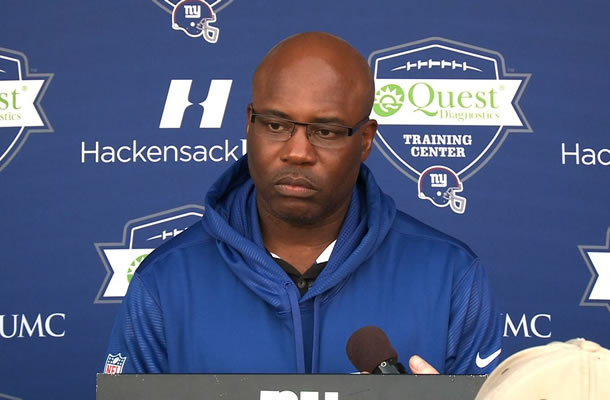 Sigh… Yes, Perry Fewell still runs the defense. I know, I feel like this team hasn’t covered a receiver down the middle during his entire tenure as the Defensive Coordinator, and even the vaunted Giants’ pass rush hasn’t been sacking too many quarterbacks over the last couple of years, but I guess you can only replace one coordinator per off-season, so like Jason Vorhees in”Friday the 13th, Part VI,” Perry lives!

The Giants allowed 383 points last year (23.9 ppg), which was kind of middle of the pack at 18th in the league. While wholesale changes didn’t need to be made, some adjustments were necessary. A lot of the guys from that D are back, but there are definitely some new faces in the rotations this year. We also have a couple of guys that could provide huge boosts to the defense, so we’ll get into those as well. Traditionally, the Giants have always won with defense (and a little clutch QB play), so I’m hoping this year’s crew helps the team get back to its winning ways. Let’s get to it, before Perry signs a lifetime extension.

The Giants lost a couple of key players this from this unit in the off-season, namely Justin Tuck, who took the money and ran to Oakland. I wish him nothing but the best there, as long as his best involves a kind of crappy season like Osi Umenyiora had in his first year after leaving the Giants. Linval Joseph, another key cog on the defensive line, left for the Vikings, so I hope he’s happy not making the playoffs too.

Mathias Kiwanuka will slide in and take over full-time for Tuck. Kiwanuka, another BC guy, has been a part of the Giants D-Line rotation for the better part of the last eight years, and was horrible last year, but he’s looked tremendous this pre-season. Maybe his ninth NFL year will prove fruitful. The other D-End will be, as usual, Jason Pierre-Paul. The man known as JPP (also as JotaPepe to me and my buddy Marc, because we’re hilarious) burst onto the scene in 2011 with 16.5 sacks, but has struggled to recapture that magic since. Last year, back problems held him to only six games and two starts. He claims he’s healthy this year, and ready for beast mode again… I hope so.

Cullen Jenkins, an eighth year man out of Central Michigan, and Johnathan Hankins, a second year man out of Ohio State, will plug up the middle as the team’s starting defensive tackles. Hankins beat out veteran Mike Patterson and his bum shoulder this pre-season to earn the nod. While Hankins lacks experience, he weighs 320 lbs. That should help him fill those gaps and keep offensive linemen on their heels.

The backups, who I’m sure will end up playing all over the line this season, are Patterson (if he’s healthy), third year veteran Markus Kuhn, former Bronco Robert Ayers, rookies Jay Bromley and Kerry Wynn, and Damontre Moore. The Giants seem to pull a new elite defensive end out of thin air every few years, and Moore is the one everybody is predicting will bust out in 2014. The 6’5″, 250 lb beheamoth from Texas A&M is entering his second year in the NFL, and has all the tools to be the breakout star of the Giants defense this year. Look out, Tony Romo.

The key to this linebackers corps last year was a guy whom the Giants basically picked up off the scrap heap. Well, Jon Beason is back to lead this defense again in 2014, and the Giants brass couldn’t be happier about it. Beason was dealing with a bad foot injury, but was just recently removed from the PUP list, and is ready to go in Week 1. The Giants aren’t sure exactly how much the eighth year man out of “The U” will play come Monday night, but anything he can do will help this team immensly.

The Weak Side Linebacker is Jacquian Williams, a fourth year guy out of South Florida who made eight starts last year. Williams hasn’t quite proven himself 100% yet, but he made some nice plays last year, and should provide some solid work on that weak side. If Beason is healthy, then the Giants have an interesting decision to make on the strong side. Either Devon Kennard, a rookie fifth round pick out of USC, or Jameel McClain, a seventh year man out of Syracuse (and a former Raven), will get the nod come Monday. I think the G-Men are probably hoping that Kennard will establish himself as an affordable, solid option moving forward, but it’s nice to have a veteran like McClain to lean on while the kids learn the game.

Rounding out the bench are Spencer Paysinger, a fourth year player out of Oregon who started ten games last year, and Mark Herzlich, who is also in his fourth year, but out of Boston College. Herzlich is like the new version of Chase Blackburn. I feel like he’s on the verge of being cut every year, but always manages to make the team and contribute. Also, he’s a cancer survivor, which makes him a great story and a solid guy to root for, so I wish him well.

This is a position the Giants have, historically, not been that deep in. Sure, they’ve had good defensive backs in their history, but you usually don’t think of Jason Sehorn, Carl “Spider” Lockhart, Tom Landry or Mark Collins when you’re thinking about the all-time franchise great defenders. The G-Men have always been more about Linebackers and Defensive Ends. That being said, they have some solid guys in the secondary this season, which should help them in their quest to contain the Desean Jacksons and Dez Bryants of the division.

The big free agency pickup this year is Dominique Rodgers-Cromartie, whom the Giants signed to a five year deal from the Broncos. It’s been a while since the Big Blue have had a big name corner on the roster, and I’m hoping Cromartie can combine with former first round pick Prince Amukamara to help the Giants contain the outside receivers of this league. It’s really about time Amukamara makes a big time impact for this defense. Maybe pairing him with Rodgers-Cromartie will ease the pressure on him and he’ll bust out. After all, he’s an honest to God prince!a

Moving on to the Safeties, we see that Stevie Brown is back! Brown, who had an awesome season in 2012, tore his ACL and missed most of last season, which was a huge blow to this defense. In 2012, Brown played in all 16 games (11 starts), picked off 8 passes and returned them for a league-leading 307 yards. He also forced two fumbles and recovered two more. It seemed like every game he was making a huge play to help the team win. Not having him last year was pretty devastating, and I’m oh so glad he’s back. Brown will pair with 2010’s big free agency pickup, Antrel Rolle. Rolle has proven himself to be a solid leader for this secondary. He can play. If Perry Fewell actually designed plays to cover the middle of the field, these two guys could really make an impact on the many of the Giants’ games.

Quintin Demps and rookie Nat Berhe are the listed backups at safety, while veterans Trumaine McBride and Zack Bowman will back up at the corner spots. Demps was signed this off-season from the Denver Broncos, and will probably provide a bigger impact on the special teams than he does on this defense, but he’s not a bad player and has plenty of big game experience under his belt. He also apparently loves the Mannings, and only wants to play for them. Either way, he and Berhe should compliment the starters well. I’m not sure how comfortable I’d be with McBride or Bowman if something were to happen to either Amukamara or Rodgers-Cromartie, but what team can really boast four high quality cornerbacks? I’m still happy they got rid of Dave Thomas in 2001, for crying out loud. As long as they stay healthy, Brown, Rolle and Rodgers-Cromartie could be huge for this defensive unit.

I’m always overly optimistic going into new seasons. Everyone is going to stay healthy and perform at their full potential. All of the guys on the verge of busting out will bust out, and all of those veterans will have throwback years and play at their top level as well. Obviously, this is not realistic. That being said, I think the Giants will field a solid defensive unit that, if it isn’t undone by Fewell’s schemes, should hold opposing offenses to manageable scores… if the offense can score.