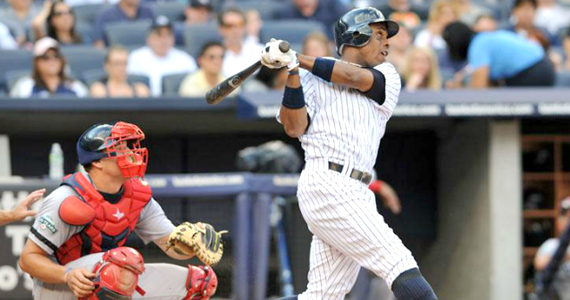 Jobu reviews a big series win for the Yankees against the Boston Red Sox.

Any time the Sox come to town, they bring with them an atmosphere of competition that is unmatched by any of the Yankees’ other rivals. I know the Sox came into this game in fourth place and under .500, but they always seem to give the Yankees a fight, and, despite dropping the series to the Yankees, they did just that in these three games. The Yankees ended up winning games one and three, but they were fairly competitive. Either way, the Yankees stayed in first, and the Red Sox stayed in fourth… That’s still weird to say.

The Red Sox clubhouse had been slowly crumbling all season, but the main support beams had crumpled by the time they came to town to face the Yankees. They had just been smacked around in a four-game series by the Baltimore Orioles, and were sitting at 58-61. They sent Franklin Morales to the mound to try to get a leg up on Phil Hughes and the Yankees. The Yankees ended up hitting five homers and winning the game 6-4, but things weren’t as easy as they would seem.

Don’t get me wrong, Hughes was far from perfect in this game. The Sox made a lot of hard outs, and hit a lot of balls right at people. That being said, they only managed to score in one inning, and all the runs came as a direct result of Hughes’ own error. Mike Aviles led off the top of the third with a single. The next batter, Scott Podsednik, hit a grounder to Hughes, who accidentally fired it into center field while trying to start the double play. The inning snowballed from there, as Yankee killer Pedro Ciriaco drove in a run with a fielder’s choice and moved to second on a walk to Jacoby Ellsbury. Dustin Pedroia came up next and crushed a three-run home run to left, which gave the Sox a 4-3 lead at the time.

Once the Yankees got the lead back, Hughes settled down and ended up getting through the seventh with just those four unearned runs allowed. His final line looked like this: 7 Ip, 4 H, 4 R (0 earned), 1 BB, 4 Ks, 106 pitches and his twelfth win of the season (12-8). As per the Girardi formula, David Robertson pitched a scoreless eighth and Rafael Soriano locked up his 30th save of the season in the ninth. Untuck your shirts for the opening salvo!

Coming into this game, Franklin Morales had allowed seven homers on the season. Four of them had been by New York Yankees (Swisher, Jones (2), Nix). By the time his evening was done, Morales had allowed four more jacks to dudes wearing pinstripes. Nick Swisher got the barrage started with a solo home run in the bottom of the first, and then Curtis Granderson and Russell Martin added back-to-back dingers in the bottom of the second to give the Yankees a 3-0 lead. After Hughes and the defense gave it all back in the top of the third, The Yankees found themselves down 4-3. That’s when Derek Jeter took things into his own hands. The Captain hit a two-out solo home run, his 250th career homer, off of Morales in the bottom of the fifth to tie the game at four.

The Yankees would take the lead in the bottom of the sixth on a beautiful RBI single by Jayson Nix, who got a slider from reliever Clayton Mortensen and literally poked it into right field for the ribbie. Swisher would give the Yankees an added insurance run by launching another solo homer in the bottom of the seventh off of Mortensen. It was Swisher’s second of the game, and marked the twelfth time in his career that he had homered from both sides of the plate in the same game, which puts him second all-time behind teammate Mark Teixeira. Kudos to the Yankees, who now have eight of the eleven homers Morales has allowed this season. Madness.

If there’s something to give the Red Sox credit for, it’s the fact that they never lay down for the Yankees (well, almost never). In game two, they sent Jon Lester to the hill to try and take one back from David Phelps and the Yanks. Despite Phelps’ solid pitching performance, Lester was too much for the Yankees to handle, and the Red Sox took game two 4-1.

Good Enough, But Not Enough

After winning his start against the Texas Rangers, Phelps took the mound for the first time as a starter against the Boston Red Sox. Things got off to a rocky start, as Adrian González followed a single by Carl Crawford with a two-run homer in the top of the first. After that, Phelpsy really settled in. Sure there were some hard outs, and some dancing out of trouble, but the Sox only managed one more run off the rookie. That came on an RBI double by Nick Punto in the top of the fifth. It’s hard to stomach any extra-base hit by a punchless batter like Punto, but whatever. Rookies make mistakes, and Phelps pitched well in this game. His final line looked like this: 6.2 Ip, 7 H, 3 R, 0 BBs, 7 Ks, 95 pitches and his fourth loss of the season (3-4).

Girardi emptied the bullpen after that, using Boone Logan, Cody Eppley, Clay Rapada and Derek Lowe to get the last seven outs of the game. The Sox plated an insurance run in the top of the ninth, but the game was pretty much over by then anyway, as Lester and the Sox bullpen really held the Yankees at bay.

As I have mentioned a couple times in this post, there was nothing the Yankees could really do against Lester in this game. The lefty hurled seven innings and allowed only five hits, which is much better than he has pitched against the Yankees at other times this season. The Yankees only run came in the bottom of the fourth on Granderson’s 32nd home run of the season, an absolute bomb to center field. Sometimes these things happen, especially when you go 0-9 with runners in scoring position… ouch.

With the series knotted up at one, the Yankees (and the Sox) were hoping to come out and steal game three and win the series 2-1. The Sox sent Josh Beckett, who agreed to put down the beer, chicken and video games long enough to pitch, to the hill to face new Yankees Ace Hiroki Kuroda. Beckett pitched fairly well, but couldn’t keep Ichiro in the ballpark, which cost him big in this one. Kuroda, meanwhile, was almost as good as he was during his shutout earlier in the week. Yankees took the game and the series.

More of the Same

After Kuroda shut out the Rangers in his last start, there wasn’t much he could have done to impress anyone in this game. Fortunately, it was business as usual for the man from Japan, who didn’t allow a run in this game until González touched him up for a solo home run in the top of the seventh. Kuroda was simply brilliant again in this game, and his final line looked like this: 8 Ip, 4 H, 1 R, 0 BBs, 4 Ks, 112 pitches and his twelfth win of the season (12-8). Soriano untucked his shirt in the ninth, and the Yankees finished off their victory.

Kuroda now boasts a 2.96 ERA on the season, which is a far cry from the 4.56 he was sporting on May 22nd. He really has turned this season around at a time when the Yankees have had to deal with two injuries to CC Sabathia and another to Andy Pettitte. He has really helped stabilize this rotation, and for that he might be looking at the team MVP award.

Who’s better than Ichiro Suzuki? Nobody. At least nobody was on Sunday night. The “aging” and “on the way out” Yankees left fielder had three hits, including two solo home runs off of Beckett. However, it was Granderson who got the scoring started, doubling in Jeter in the bottom of the first inning to give the Yankees a lead they would never really come close to relinquishing. In the bottom of the third, following a double steal by he and Swisher, Jeter scored on a wild pitch by Beckett to give the Yankees a 2-0 lead. Ichiro took care of the rest with solo homers in the fourth and sixth innings, and that’s all the Yankees would need on this day.

It was nice to see Ichiro and Jeter, who each had three hits, lead the offensive barrage for the Yankees. These two are the oldest members of the team, and have recently been among the more productive players on the team as well. Jeter is back leading the league in hits with 163 and hitting .321, while Ichiro has slash lines of .322/.344/.506 since the Yankees acquired him from Seattle for a bag of scuffed baseballs. Great to see those guys contributing at the elite levels they are known to be on.