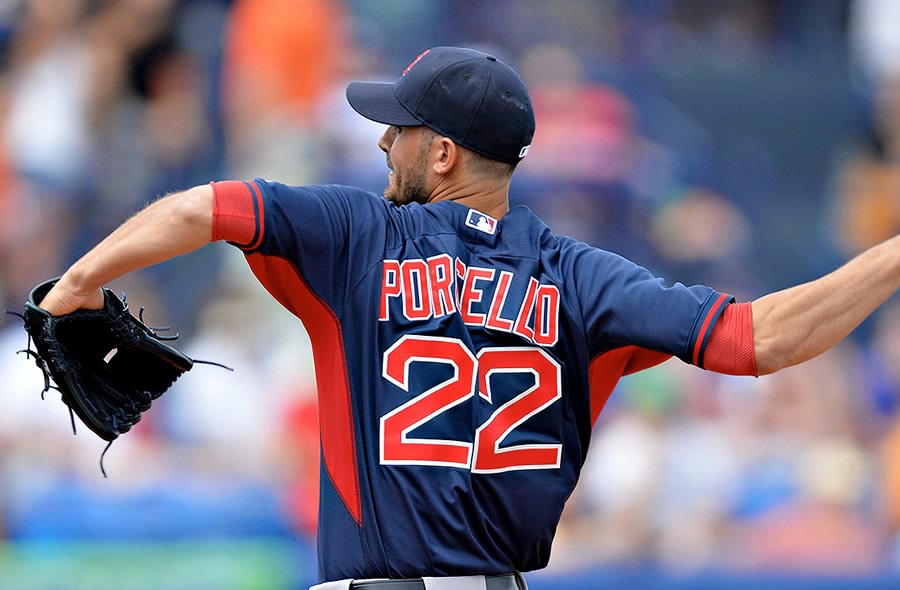 [dropcap]A[/dropcap]s is often the case with any major league ball club, the biggest question facing the Sox as they approach the 2015 season revolves around pitching. The essential question asked is, “Is there an ‘ace’ in their rotation, and if not, can they get by without one?” Let us take a closer look…

I am torn between believing they have an ace, while at the same time assuming they’re not done dealing. The case can be made that one of their first three starters, Clay Buchholz, Rick Porcello (pictured above), and/or Joe Kelly, is ready to step up. Although Buchholz is the early leader to be the Opening Day starter, to my way of thinking, it’s Porcello who is most ready to blossom. Of course, the draw back to that is that he’s in the last year of his contract, and a Scott Boras client to boost, so to keep him could get expensive, but that’s a topic for another day. As for the current season, he truly looks ready to make the move.

As for the back end of their rotation, at this point it appears it that will consist of left-hander Wade Miley and the recently returned Justin Masterson. Miley, who the Sox obtained through a trade from Arizona, is what he is–an eater of innings. The 28 year old, is essentially a .500, pitcher, but threw 201.1 innings last year, after throwing 202.2 the year before, and will hopefully duplicate those efforts in a new league. The 6’6″, Masterson spent most of the past six years in Cleveland (briefly St. Louis) trying to become a consistent starting pitcher (48-61, 4.23). Before Boston traded him to the Indians back in 2009 for Victor Martinez, he was a fairly effective late inning reliever, which is a role to which I would like to see him return. My prediction is that once the hard throwing left-hander Eduardo Rodriguez (he recently trew 96 mph against his former team, the Orioles) gets a little more AAA experience, he’ll be called up and Masterson will go to the bullpen, where he’ll likely be needed.

As for the bullpen, there seems to be much agreement that it could stand some depth. Closer Koji Uehara, who will soon be 40, is healthy again and should return to his past effectiveness. The overused Junichi Tazawa should also be ready to go, and will likely benefit from the return of Brandon Workman to the pen. The young, 6’5” 235 pound Texan, who was very effective in the 2013 post season, is coming off rather unsuccessful season (1-10) as a starter, so the move seems a no-brainer. Lefty Craig Breslow, right-hander Edward Mujica, as well as knuckballer Steven Wright, should all be in the mix for a variety of bullpen roles, and should be effective. But it’s a long season, so they will likely need to add depth, or hope their starters are effective, as the season progresses.

The Sox appear to be very strong in this area, and potentially should be for a long time to come. The hot, young prospect that all the scouts, especially those from the Phillies, seem to be lusting over is the 23 year old Blake Swihart (pictured above). The 6’1”, 205 pound switch hitter is said be able to hit for both average and power, and is alleged to have a cannon for an arm. However, he is apparently just a little bit of experience away from super stardom. The Sox seemed to be comfortable enough with the weak hitting, but defensively exceptional Christian Vazquez that they are considering switching Swihart to another position. At any rate, local boy Ryan Hanigan, of Andover, MA, will be the back up. So once again, if they can stay healthy they should be in good shape behind the plate.

First of all, you may have noticed that I didn’t bother to mention anything about the DH. I feel it’s safe to assume that as long as he is healthy, David Ortiz will be in his customary spot in the line up. Should he not be, I think that there are enough options and movable pieces that they should be OK in this department. The biggest question here is more about how much playing time he gets during inter-league play. As for my prediction, I believe the Red Sox will win the AL East. Although it likely got a bit easier with Toronto’s recent loss of pitcher Marcus Stroman for the season, it could still be a struggle. You have to like the strength of the Sox starting lineup, but Baltimore’s pitching is still very solid, Toronto still possess some big bats, Tampa Bay has never been a friendly place for the Red Sox, and if Tanaka and A-Rod both return to form, and they catch some breaks on the injury front, the Yankees could be very tough.

So, I’ll stop with right now with that, as I’ll need to see how some of these questions are answered before predicting whether or not the Sox will make the complete worst to first to worse to first thing. Should they not hit the warm weather near the top of the division, then I expect you’ll see GM Ben Cherington parting with a few of his prized prospects, likely for that front line pitcher. But until then, stay tuned.