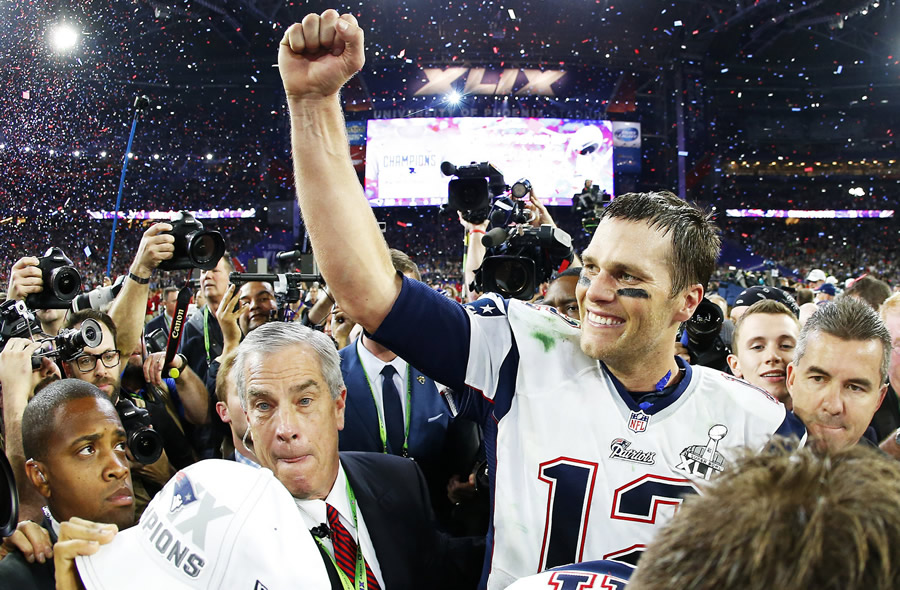 [dropcap]I[/dropcap] figure that the posting of this edition will bring an official end to the permissible celebratory (aka: gloating) period that follows a Super Bowl victory. So, before I totally give it up there are a few remaining random reactions and recollections I would like to share.

I’ve heard that expression defined in a variety of ways but they all, at their essence, reflect a difficult series of events, which in a relatively short period of time, have to be successfully completed if a situation is going to work. What’s that got to do with the Super Bowl? Well, to my way of thinking, the last two plus minutes of the game, at times, had a real “goat rodeo” feel to it. Especially so for the Seahawks, but at times near the very end, for the Patriots as well. Let’s face it, Seattle had the ball inside the 50, with 3 time outs, and way too much time on the clock. That should have been the “Golden Ticket”, but instead it seemed to cause Seattle to lose some of their focus. How else do you explain them having to burn the first of their timeouts when they allowed the play clock to get down to :01? Then after that cursed (Jermaine) Kearse catch, once again it took them time, first to realize it was a completion, and then to get organized and to the new line of scrimmage; forcing them into having to call another time out. In retrospect, the case can be made that it may have better for them if the ball is not caught as that would have stopped the clock and given them a few extra seconds to gather their thoughts. But instead, with their frenetic coach prowling the sidelines, you are left to wonder if given an extra time out, they don’t approach it a little bit more wisely and effectively.

That not to say I’m convinced that Coach Belichick was totally in tune with what was going on either. There seemed to be a minute or two after the Kearse catch that he had “deja-vu”, somewhat stunned expression on his face that just about everyone in Patriots Nation had as well. You can be assured that there was ample discussion in the days following as to whether the end result of his not calling a timeout once Seattle got to the 5, was good coaching or good fortunate. I choose to believe they what he was doing was casting his fate with his players and coaches and their preparation for such events. In the end, Malcolm Butler made him look like a genius. By the way, Belichick, in his very entertaining appearance with David Letterman, admitted that he indeed had decided to play it out, and his faith was rewarded.

In addition to making his coach look good, Butler also saved safety Duron Harmon from years of having to explain himself, and/or wondering, “What if….?”. Harmon number 30, was that player you saw flying over and past the prone Kearse, while the ball floated tantalizingly in the air above him. It’s difficult to tell from replays whether or not he realistically could have effected the outcome, but not having tried might have haunted both Harmon and Patriots fans forever. Instead, I’d rather remember him, at least for now, for his end zone interception in the late stages of the Ravens game, that essentially ended Baltimore’s last realistic chance to take the lead, and helped propel the Pats into the AFC Championship game.

Russell Wilson: We might be forgiven for forgetting that with all his early success, he is still a 3rd year quarterback, (General rule of thumb is that it takes 5 years to make a good NFL QB.) but a more experienced QB throws that ball low and away where it can’t be intercepted.

Hating the Colts: It truly surprises me that more people don’t hate the Colts in the same way they hate the Pats. I mean, first of all, they literally sneak out of Baltimore under the cover of darkness, they are responsible for most of the offense friendly rule changes because of P. Manning’s whining about Ty Law and finally it turns out that it was their general manager who went whining to the league about the Patriots footballs. That might explain why it’s been such a strange “investigation.” First there were supposedly 11 of 12 balls under inflated by 2 psi, then no it was 11 of 12, but only by 1 psi, then it was actually only one and it was under by 1 psi, and now we don’t actually know since no one recorded the initial psi of any of them. Seriously?

Return Trip: With an average age of just over 25, you would think the odds are decent that New England might to the SB to defend their title. How likely that is may come down to their ability to hold onto such key people as Darrelle Revis, Devin McCourty, Stephen Gostkowski, Vince Wilfork, and Shane Vereen.

Correction: It was Julian Edelman who hit Seahawks DB Jeremy Lane when he broke his arm and not, as I said, Danny Amendola.

Second Guessing: I wonder if Wes Welker still thinks going to Denver, for less money no less, was so smart?

New lucky spot: I watched the SB at an Irish pub on a beach in the Dominican Republic, called Jose O’Shay’s, with a surprisingly large number of New Englanders. We made a date to do it again next year. Here’s hoping….