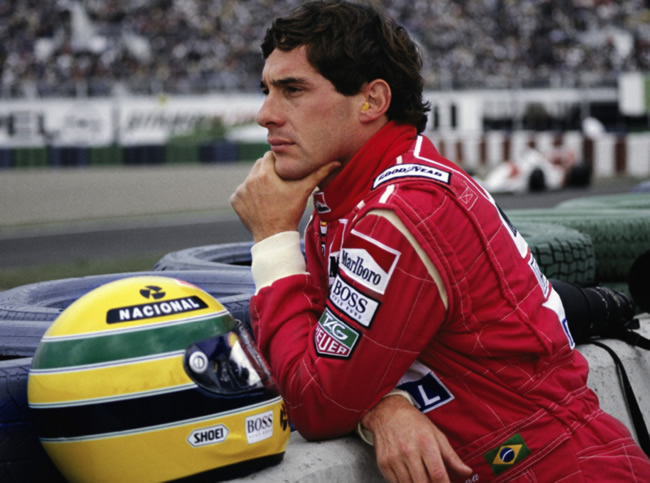 This moniker has many connotations when it comes to people, and for this site you may be thinking I might be talking about Wayne Gretzky, Roberto Clemente, Dwayne “The Rock” Johnson, or quite possibly Scottish professional snooker sensation Stephen Hendry. I am actually talking about three-time Formula One world champion, and arguably the best F1 driver to ever live, Ayrton Senna. This driver is so influential that almost all of the current F1 drivers still idolize him, including current world champion Sebastian Vettel and British superstar (and Nicole Scherzinger boy-toy) Lewis Hamilton. Senna remains an enduring and controversial figure, both in the racing world and now, with the release of 2010 documentary “Senna”, the film world. The film, out this month in the United States, chronicles the career of this larger than life character.

Through the miracles of Twitter and following the F1 community, I was able to watch a sneak peek of the documentary back in May. I will say that, after my huge amount of anticipation for the release,  the movie is absolutely stunning. I was instantly reminded of why I started watching the F1 series in the first place. Growing up in a racing household, it’s easy to see why I would prone to watching racing in the first place. However, in the USA, F1 has never been hugely popular and, until recently, it’s only been readily available on pay cable and occasionally on free TV. For me, this madness all started in the unlikeliest place: a video game. “Ayrton Senna’s Super Monaco GP II” for the Sega Genesis was my first “real” taste of F1 racing. This game pushed me to find out more about who those characters were, and what this kind of racing was.

Sadly, it wasn’t until many years later was I able to watch some footage of his races. Even when I did see the footage, however, it was on terrible quality replays on TV, which were taken from the original broadcasts. Even the Youtube footage that hasn’t been killed by Formula One Management is really terrible. That’s precisely what makes this documentary all the more stunning. The filmmakers were given almost unprecedented access to F.O.M.’s footage of the era and the Senna family home footage, all of which was brilliantly restored to present a truly compelling story. I took my wife to the sneak preview and I was pretty shocked to see that she was driven to tears by the film. She hates it when I watch the races, week in and week out, from March to November every year for the last 7 years that I’ve known her, and since 1994 all together.

It really is something special, with a universal appeal. If you can see it in the theatre, definitely go check it out this month when it finally hits the USA. Next time, we’ll take a deeper look into the current state of F1.

Born from wolves and raised on methanol, Papa Wheelie comes from a long line of motor-heads and adrenaline junkies. Formula 1 and MotoGP are his sports passion, but he also enjoys fine tequila, electronic music and furry animals. You can reach him on Twitter @PapaWheelie11

2 thoughts on “The Great One”