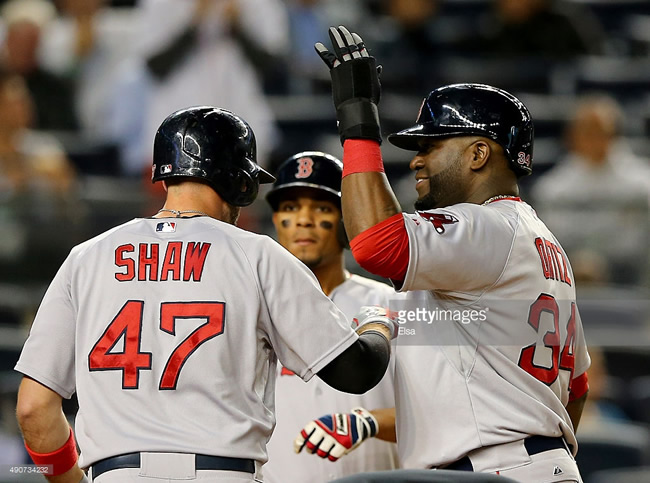 As basically unsatisfying as this season has been for Red Sox Nation, it’s not been without its positive points and is ending in a manner (currently in the middle of a 5 game winning streak, 2 in a row against the Yanks) that surely gives credence to that familiar refrain, “Wait until next year!” Let us take a closer look at why Red Sox fans are feeling better about 2015, and are starting to get excited about 2016.

It’s a little difficult to actually pinpoint what started gradually turning things around for the Sox, but at some point after the All-Star game, the one with only one Boston All-Star, they started to look a little like they actually cared. Maybe it was the hiring of a new boss in Dave Dombrowski, or perhaps it was the conceding that the Hanley Ramirez as a leftfielder experiment was a total failure, or the spark that the young outfield of Rusney Castillo in left, Jackie Bradley in center, and Mookie Betts in right, gave them. Whatever it was, I have a feeling David Ortiz felt it too, as this is the point at which he started to pick it up and started his march towards 500 home runs. The second half stats of all the above are eye-catching for both positive and negative reasons. Look at Ramirez- 0 HRs/7 RBIs/ .183 BA. and contrast that with Bradley- 9/40/.280, or Castillo- 4/23/ .281, or Betts- 6/30/.322, not to mention the improvement in defense, and you can understand where much of the spark came from. And let’s not forget Ortiz who, in 63 games after the break, hit 21 home runs, drove in 61, and hit .310. (36/ 104/ .269 overall) and helped to give some pop to the lineup.

Despite all those glowing things I said about the young and exciting outfield, I wouldn’t be surprised if at least one of them is involved in a deal to bring a big bat or front line pitcher to Boston for next season. Someone like Jackie Bradley might have to be included in a transaction just to get a team to take Ramirez off their hands. However, it is generally accepted that there are two players that the Sox just will not trade under any circumstances. One is Betts and the other is shortstop Xander Bogaerts. Bogaerts has 194 hits, and is hitting .324 with 7 homers and 81 RBIs. He has become an All-Star caliber shortstop and finally provided the Sox with a long term replacement for Nomar. For the longest time, catching prospect Blake Swihart was also included in the untouchable group, and over the second half of the season has proved he might well belong. His 2 HR, 5 RBI effort in the Bronx the other night certainly didn’t hurt his cause.

Although the Sox are definitely in need of an ace, as well as some more bullpen help, they do have reason to be optimistic with some of their returning talent. Eduardo Rodriguez has gone 10-6, 3.85 ERA, Joe Kelly won 8 in row to also finish at 10-6, 4,82, Ric Porcello, 9-14, 5.02, has some very strong efforts after a stint on the DL, a nice young arm in Henry Owens, and a surprising old one in Rich Hill, who turned in 3 straight 10K performances as well as a complete game. If Dombrowski can go out and pick up some help for the bullpen, then maybe Junichi Tazawa, won’t get used every other day, and will actually have something left for the end of the season. I bet they could get Jonathan Papelbon shipped back to Boston real cheap. Just a thought…

Anyway, I think I’ll leave it there for now, and wait to see how certain questions are answered. Things like… will they sign a big name pitcher? Will they try to get one more year out of Dustin Pedroia? Does Ortiz have another in him? Is Travis Shaw the answer to their first base or third base need? Are they going to give Sandoval another chance, and if not can he be moved? What about a manager?