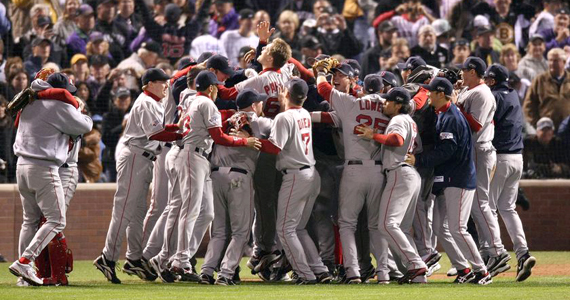 Last week, Jerry Ballgame weighed in on the Red Sox collapse, and the many questions that will have to be answered in Boston this offseason. This week, he comes up with some possible answers!

Seeing as we are coming up on the 100th anniversary of both the opening of Fenway Park and the sinking of the Titanic (both events happening in the same week in 1912, and no I wasn’t at either) comparisons are inevitable. You could easily recast the classic James Cameron movie with Tito as the captain unable to alter the course of his ship, and Theo as the designer of the huge, expensive vessel that was far from unsinkable. Both of whom, it should be noted, went down with their ship.

Red Sox fans can relate to that feeling of supreme confidence followed by large quantities of very cold water, and are searching the horizon for some help. Just how much water will we have to tread?

As appreciative as we are that Theo helped to design such a wonderful boat, it truly seems time for him to move on. Owner John Henry acknowledged on the Dennis and Callahan radio show on WEEI, that there is a definite shelf-life to this type of job and that Theo would not be there forever. I know he has one more year left on his contract, but I would think rather than recreate the lame duck scenario that undermined Francona this past season, Theo should move on now.

As I write this, a rumor is being circulated that Theo was spotted in a Chicago Starbucks. I suppose this could be taken one of two ways. One, that he is definitely going to the Second City, because why else would he run the risk of annoying a Red Sox sponsor in Dunkin’ Donuts. Or, he’s staying because the Cubs think so little of him, they made him buy his own coffee. I’m hoping it is the former.

There may be sentiment at the top for Theo to leave as well, as it has long been held by many that President and Chief Executive, Larry Lucchino, has wanted to regain some of the decision making influence regarding players, that he lost when Theo signed his current contract.  Lucchino, and current Vice-President Ben Cherington, would seem to be logical choices to take over Theo’s job, with Cherington getting full responsibility when Luucchino replaces Selig as commissioner.

Their first move would be to hire a new manager. Who should that new manager be?  How about a couple years of Bobby Valentine? I don’t think you want another “player’s manager” right away. Unless you can unload all the problem “children”, you’re just asking for more trouble. Plus, it seems to me, that historically speaking, when you replace a popular/ successful coach or manager, the immediate successor rarely lasts more than a few seasons. Maybe Valentine could make some changes before wearing out his welcome. It’s a thought.

So then, and in keeping with the theme, who do we make room for in the lifeboats?

Some of the lifeboat choices are easy, although not always for the same reasons. In the infield González and Pedroia are the no brainers. Although González’s production fell off after the All-Star game (10 of his 27 homers, and 40 of his 117 RBIs after the break), he’s ours for the long haul. You have to believe that the shoulder was not 100%, and hopefully will hold up for the entire season in 2012.  Pedroia remains the heart and soul of the Red Sox, and should be the new captain replacing Varitek (Not sure I’m OK with this captain for life thing that happens in baseball, but if you’re going to do it, he’s the one).

Shortstop has been a position that has seemed unsettled ever since the Sox traded their last shortstop of the future in Hanley Ramirez to the Marlins for Josh Becket (There were a few other players of impact in that transaction, but I digress). Marco Scutaro, who has one of my favorite all-time names (try it, MARCO………scutaro), was one of the few Red Sox to fight through September, and deserves to come back. However, at 36, he’s not the long term answer. Jose Iglesias is, we think, but it still remains uncertain as to when that future will arrive.

Hopefully Kevin Youkilis will be healthy enough next year to regain his spot at third base and hit clean-up. His 2011 stats were better than I thought (17 homers/80 RBI) in a 120 games, but it felt like he never really got going.  I worry that there aren’t many more seasons in that soon to be 33 year old body. Not sure Mike Aviles is the answer, and we know that Jed Lowrie is not, so we may soon be in the market for a third basemen. It would be tough to trade the so called “Greek God of Walks” (who’s not really Greek) but he’s certainly not going back to first. DH? Maybe.

The outfield will be anchored by Jacoby Ellsbury for at least two more years. If he can duplicate what he did this year he will be in for a very large payday, come 2013. But let’s not think about that right now. Let’s instead worry about Carl Crawford. I’m hopeful that after a season in the pressure cooker that is Red Sox Nation, he will rebound and earn some of the big contract he signed. I was truly surprised by how mediocre an outfielder he was. My biggest fear is that he’s too obtuse to play the angles (math joke!) of Fenway’s outfield.

Of the issues facing their pitching, a couple of things jump out at you. One is that they need to sign Papelbon. Although he did not “finish” on a positive note, he still had a strong year, and one of the best options out there. I think Wakefield is done, and to make things worse, obsessing on records (The whole 200 wins thing became a distraction). I understand that “eating innings” is important, but it helps to be effective, too. Whatever else the Sox do, they have to get rid of Lackey. Steve Philips, former Mets general manager had an interesting idea. Trade him to the Cubs for Carlos Zambrano in an exchange of bad contracts. His theory was that Zambrano would behave for at least one year (Maybe).

Finally, it’s time to part with Varitek and Ortiz.  A catching duo of Saltalamacchia and Lavarnway does not necessarily instill confidence, but I can’t help but feel that the intensity that made Veritek what he was (favorite 2004 moment, him smacking ARod) is no longer there. As for Big Papi, he’s been the face of the team for so long, parting would be tough. But it would give them some additional flexibility, and a way to rest their veterans (Now if we could just get Victor Martinez back). But more than anything, I’m bothered by two things. One is the no homers and 4 RBI’s he got in the last thirty games, and two, his interrupting a Tito post-game press conference because he thought Tito was responsible for his losing an RBI. It just was a selfish act that was probably no small insight into what was ailing the Sox.

That’s it for now. I know that there is much more to talk about (Dice-K, anyone…), so I’ll be back.

2 thoughts on “REBUILDING THE RED SOX: A TITANIC JOB”