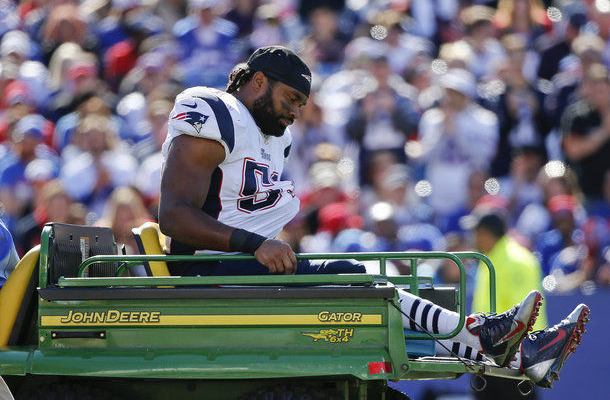 When I recently took the NFL to task for what I consider a growing list of arrogant actions, one item I forgot to include was Thursday Night football. I don’t care what the TV ratings are. To me, it represents yet another opportunity for the league to cash in on its popularity at the expenses of the players’ health. For the Pats, playing for the fourth time in eighteen days, (as were likely the Jets) and reeling from another set of key injuries, they were fortunate to come away with the win. Although they stand a top of their division at 5-2, their long term goals seem much further away then they did a short time ago.

The Patriots block a field goal to seal the game.

Despite the facts that the Pats held the ball for less then half of the time that the Jets did (19:05 to 40:54) and totaled 100 less yards than New York (323 to 423), they still managed to come away with their fifth win of the season, and the second in four days. They were clearly struggling to make up for the loss of leading tackler and signal caller LB Jerod Mayo on defense, as well as leading rusher Stevan Ridley on offense, not to mention missing offensive lineman Dan Connolly and Bryan Stork, both out with concussions. All these injuries came in the Week 6 contest against Buffalo, which must have felt to the players like the day before. These injuries tend to have a trickle down effect, forcing players into unfamiliar situations. In this case, second year LB Jamie Collins had to do the signal calling, which contributed to the Jets’ Chris Ivory‘s 107 yards on 21 rushes, and 1 TD. Defenders seemed to consistently be out of position, late to react and just not making the tackles that would have minimized the damage. To top things off, now DE Chandler Jones has come down with a hip injury, and will be out for a month. Obviously, all the news was not bad. They  finally got some significant contributions from “The Unhealthy One,” AKA Danny Amendola, who had a clutch TD reception and 105 yards in return yardage. Tom Brady threw 3 TD passes, Shane Vereen had 2 TD catches and WR Brandon LaFell (4 catches, 55 yards) continues to show some life.

WEEK 6: BUFFALO, WITH MAYO ON THE SIDE:

Brady and the Pats looked great against the Bills, but at what cost?

This should have been a victory (37-22) to celebrate and build on. Instead, it left New England fans with a distinct feeling of, “been there before, didn’t want to go back,” as they once again lost the before mentioned Jerod Mayo to a season ending injury. (Seriously, is this bad luck or bad technique on his part?) There were things to feel good about; Brady was 27/37, for 361 yards and 4 TDs; Brandon LaFell’s performance of 4 catches for 97 yards and 2 TDs; Gronk’s 7 catches for 94 yards and the defense’s 3 takeaways. Maybe these are not Super Bowl worthy stats, but at least they helped to make New England a force with which the rest of the league had to contend. We will see soon enough if this is still true, as they face Chicago and Denver at home before the bye, then take on the Colts, Lions, Packers and Chargers (with three of those on the road). I like their chances against the semi-dysfunctional Bears, but not so much against the Broncos. But, as the saying goes, “That’s why you play the games.” Stay tuned…

I, along with three family members, were at  Gillette for the Jets game. We got home at 2:00 am. It’s good to be retired.