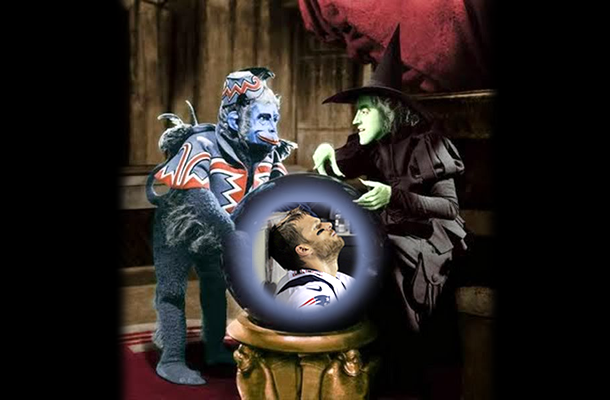 I know that the Kansas City, which is home to the Chiefs, is in Missouri and not Kansas, but in their 27 point loss to the Chiefs, the New England Patriots played like something out of the “Wizard of Oz;” without  brains, heart, or courage. Perhaps worst of all, Bill Bilichick and his coaching staff seemed about as ineffective as the title character in the Judy Garland  movie classic, and that my friends, is scarier than a flock of flying monkeys.

When it was announced before the game that the Pats had activated all five of their Running Backs, as well as all three Tight Ends, but only three Wide Receivers, the anticipation was that they were going to rely on the run to counteract the strong pass rush of the Chiefs. When they proceeded to pass 12 of their first 15 plays, and all 12 of those from the shotgun, many people were confused. Unfortunately for Tom Brady and the Pats, the confused ones did not include the Kansas City defense. It was, for the most part, a very difficult day for Brady, as he was just 14/23, for 159 yards, 1 TD, but 2 INTs–one a pick six. He has since come out and admitted that they have not played well offensively, and questioned whether or not the Patriots have all the tools they need. This admission makes the fact that Belichick and offensive coordinator Josh McDaniels, chose to not have two of their tools in second year WRs Aaron Dobson and Kenbrell Thompkins available, all the more confusing. The Boston Globe revealed recently that Dobson was benched for two games by McDaniels, reportedly for “mouthing off” to him. Considering how bad Brady and the Patriots looked in those two games, you have to wonder who he was trying to punish. I’m just not a big fan of McDaniels, and often do not understand his play calling. (Exhibit A: The opening sequence against the Raiders.) This might be a good time to replace him, as I understand that Charlie Weis has suddenly become available. Something to think about…

It seems fairly obvious to most of Patriots Nation that Tom Brady’s heart is not into this season in the way it has been in the past. The assumption by many is that the release of his pal and protector, Logan Mankins, was the last straw. Under Belichick, the emphasis has always been on”value”, which is essentially code for “keep it cheap.” You have to believe that after structuring his contract so consistently in a team friendly manner, Brady is tired of watching the Pats pocket the money instead of keeping talent around him.  At 37, he no longer has the time to wait two or three years for youngsters to develop around him. I never thought I’d say this, but for the first I’m beginning to believe that if their approach doesn’t change soon–as in overnight–he’s likely to finish his career somewhere else. In the meantime, let’s hope that the return from suspensions of Brandon Browner on defense and Brian Tyms on offense, will provide  both of those units with some much needed heart, as they face the undefeated Bengals. The defense particularly, displayed little of it Monday, as the Chiefs rolled up over 440 total yards, with most of that coming in the first half.

No one who has watched Tom Brady on a regular bases doubts the man’s courage. Over the years, he has stood in the pocket, holding onto the ball as long as he could and taken a real pounding in the process. I believe that the fact that he is always listed on the injured list as “questionable” or “probable” because of his shoulder, is in part, a reflection of this. But you also have to believe that as he approaches the end of career, he wants to go not just a winner, but also with his mental faculties intact. Unlike the majority of NFL players who go bankrupt within two years of retirement, he should have a long comfortable life. Right now what is needed, for both his success as well as the team’s, is for them to start using more play action, for Rob Gronkowski to be his old self and for one of the receivers, in addition to Julian Edelman, to step up their game. I admit it,  although I still believe they can make the playoffs, I no longer expect them to win the Super Bowl. For that to happen, we’ll have to find a real wizard. Preferably one who can play multiple positions on the offensive line…