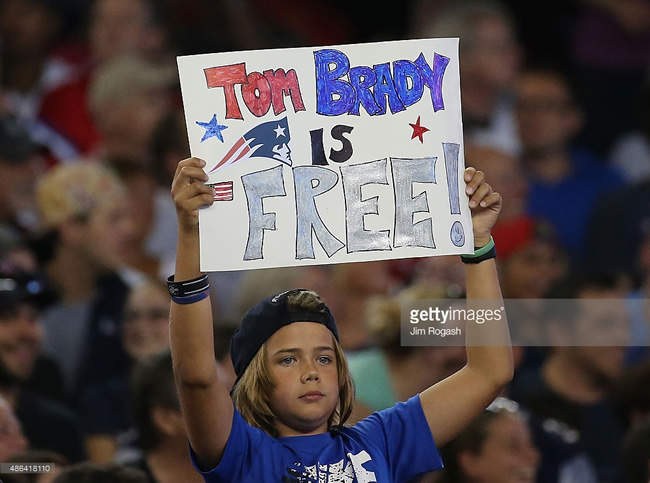 I was in room 522 of the Springfield, Ma, Marriott, having just finished working out, when I saw the AP report on the news that Judge Berman had overturned the NFL’s 4 game suspension of Tom Brady. I’m sure I’m not alone in remembering exactly where I was when I got the news, and realized along with the rest of Patriots Nation, that our long public struggle was finally over. So all you “haters” out there, especially you working members of the media, it feels good to say, give it up. It’s over.

Although I was 100% sure the NFL was going to get smacked soundly by Berman in his final decision, I was only about 60% sure he would go as far as to over turn the suspension. My concern was that as bad and incompetent a process the NFL’s “investigation” had been, he might have just pointed to the C.B.A. and told the NFLPA that if you were dumb enough to sign it, then you have to live with it. Clearly, that was what Roger Goodell was hanging his reputation on. But what he seemed to lose track of was that, along with naming yourself chief arbitrator, goes the responsibility of actually acting like an arbitrator, which implies at least an attempt at being impartial, and perhaps some connection to past precedent. In other words, when Brett Farve was with the Jets, and sending pictures of “himself” to a female employee, he was fined $25,000 for failing to hand over his cellphone, and not suspended for two games. When former Jets kicker Jay Feely was accused of tampering with the “K-balls” he was to kick with, he was neither fined nor suspended. Judge Berman had obviously done his homework (or perhaps one of his clerks had) and was aware of these blatant inconsistencies. In addition, the fact that the NFL had made no effort what so ever to settle the case, despite his orders to do so, could not have played well with him either. So in the end Goodell and his friends were once again left looking foolish and will just have to console themselves with the $10 billion or so they made last year. This is the point at which you shake your head knowingly, and just keep telling yourself it’s fool proof, the business is just plain fool proof.

So now that Tom Brady is officially back, although he technically never left, I am prepared to go out on a medium size limb and say that I am 80% sure that the Pats will return to the Super Bowl this year. I am not prepared to go all in just yet, because there are a few things to be concerned about. For one thing, the loss of Darrelle Revis has got to hurt to some degree. I’m not sure he has all that much more in the tank, but another year “on the island” might have been nice. Having said that, I’m convinced that Malcolm Butler is more than a one play wonder, and will fill in nicely at CB. I’m also concerned about keeping the offensive line healthy. Second year center Bryan Stork missed most of training camp reportedly because of a concussion, and tackles Sebastian Vollmer and Nate Solder always seem to be recovering from one surgery or another. It took them a good month or so to jell last year, so having them healthy should allow for a stronger start to the season.

On the plus side of things, the Patriots will have a very athletic and strong defensive front seven. Everyone is expecting OLB Jamie Collins to have a monster year, and having LBs Jerod Mayo and Dont’a Hightower ready to go is also a major plus. Big things are expected of last year’s number one pick DE Dominique Easly, plus DE Jabaal Sheard, as well as my pick for defensive MVP, DE Rob Ninkovich. On the offensive side, having Rob Gronkowski at 100% from game one, along with Danny Amendola and Julian Edelman, should give Brady the targets he needs.

I expect that New England will once again win its twelve games and get back to the playoffs, it just won’t be easy. Everyone in the AFC East has improved in some way. The Baltimore Ravens always give the Pats trouble, were arguably their most difficult playoff opponent last winter, and I expect will stand in the way of their returning to the Super Bowl. Much remains to be seen, and it all starts very soon. There is however one thing I am 100% sure of; Vince Wilfork will be missed.