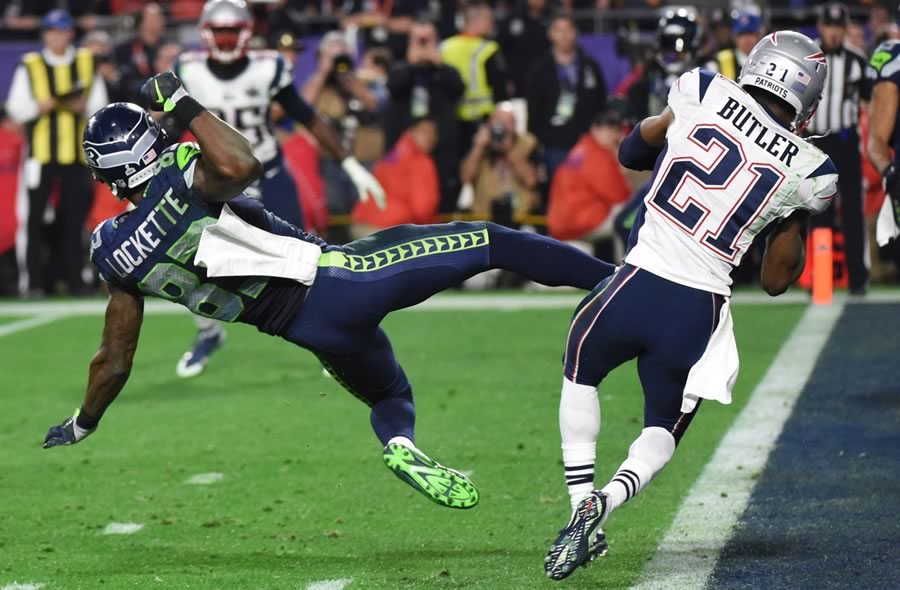 [dropcap]R[/dropcap]ight about now I’m not sure who I appreciate more; Malcolm Butler for making the play that saved the Super Bowl for the Patriots, or the NFL Network for constantly replaying the game so that I can enjoy that moment over and over again. Of course, mixed in with all that enjoyment and appreciation is the knowledge that if the “vaunted” Asante Samuel could have held onto a far easier interception back in February, 2008, then the Patriots are perfect, we are spared having to see replays of the David Tyree catch, and perhaps best of all, the ’72 Dolphins go away. If I’m coming across as a bit random in my thoughts, think I can be forgiven. After all, after watching  a game like SB XLIX, which followed two weeks of enough mindless talk to be be mistaken for C-Span covering Congress, it’s difficult to focus on the moments and reflections that mean the most to me. But I’ll try.

LEARNING OUR LESSON: (IN BILL WE TRUST)

I would really like to use this moment to gloat over the fact that in my preseason preview, I predicted that the addition of Darrelle Revis to the Pats defensive backfield would be a key factor in helping them win the Super Bowl. What stops me in mid gloat is that fact that, along with a large part of Patriots Nation, I jumped off their band wagon after a weak start and their Week 4 thumping by the Kansas City Chiefs. I went as far as to wonder if Tom Brady might indeed finish his career somewhere else. Even though I was very encouraged by the improved play of the Pats’ offensive line, I was speculating that their struggles at the end of the season, combined with Brady’s habit of trying to force at least one pass to Rob Gronkowski in the end zone, would lead to an untimely departure from the playoffs. I was obviously wrong. I should have maintained my faith in the ability of Bill Belichick to make adjustments, to utilize the skills of his players and to be totally prepared for each and every game situation. (Just ask Malcolm Butler about that last point.) Although I didn’t get the final score right, I can at least take some credit in getting right that New England would win by four.

THEY CAN DISH IT OUT, BUT THEY CAN’T TAKE IT; (THE “BOOM” WENT BUST)

It seemed like every time you turned around another Seattle defender was being helped to the locker room, usually after an interception. Jeremy Lane broke his arm on vicious hit by Danny Amendola, of all people, and DE Cliff Avril suffered a concussion when hit by Brandon Bolden. In general, the bigger, stronger defensive backfield of the Seahawks had a great deal of trouble with the smaller quicker Patriots receivers, as the 5′ 11″ 195 pound Amendola went 5/11, 48 yards, 1 TD, and the 5’10”, 200 pound Julian Edelman had 109 yards on 9 catches, and 1 TD. New England had 377 yards of total offense against the number one defense in the league, with Brady going 37/50 for 348 yards, and 4 TDs. If Brady takes a little bit care of the ball, the Pats might well have won fairly easily.

I know it’s a stretch, but let’s face it Pete went from singing songs of joy, to the blues in about a heart beat. Did he out think himself, or just not think it through enough? I admit I too thought he had done the Pats a favor by not running Marshawn Lynch from the one, but let’s take a closer look at it. Lynch was only 1/5 this year scoring on runs from the one, and 5/12 for his career. Not the sure thing we were assuming. But of all the possible pass plays and options he had to chose from, that was weakest. I have to believe a fake to Lynch, and QB Russell Wilson likely has an easy path to the end zone. Although perhaps we shouldn’t assume that either, given the reactions of Malcolm Butler, I have to believe he runs Wilson down and forces a fumble.

There is a great deal more I could go on about, and likely will before long, such as the outstanding play on defense by Rob Ninkovich, Vince Wilfork, Alan Branch, and Jamie Collins. There’s also the fact that Revis gave up only one pass the entire game, and that was seriously aided by a questionably placed official. I could also go on about a fine showing by the offensive line that allowed just one sack, or their strong special teams play. But for now, I think I’ll just leave you with the realization that the “Gisele Curse” has been broken, and the thought that a fourth Super Bowl win for the Patriots sure has a nice ring to it.