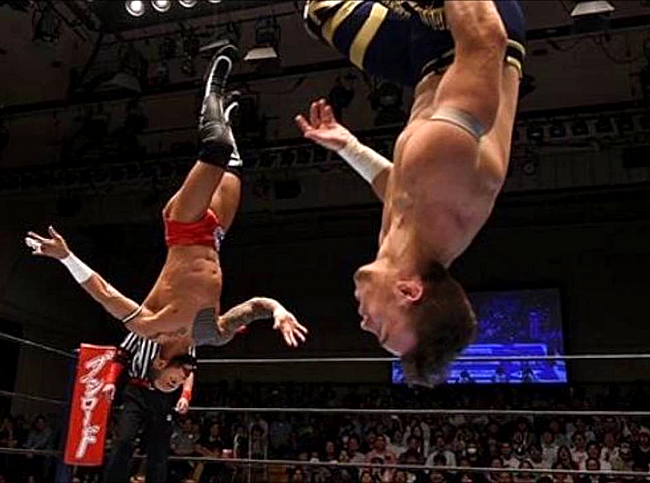 Pro wrestling isn’t real. Yes, many of the guys are great athletes, they can and often do get hurt, and there is a competition that exists as far as trying to get to the top of the industry.

But in the sense of it being a “real sport,” it is not. Outcomes are pre-determined and everything you see is for show. Promoters and performers dropped the pretense of it being on the level years ago and people watch now not because they think it is a legit fight, but because when it is done right, it can be the perfect mixture of violence and drama, just like a great action movie.

That’s why it amazes me how crazy people still get over this stuff.

Consider poor Vader; all the guy wanted to do was express his opinion about a wrestling match and somehow it snowballed into the Twitter equivalent of World War 3.

The former WCW champion and WWF superstar, whose real name is Leon White–I know, shocking “Vader” isn’t his birth name–was intrigued by the online chatter about the New Japan Pro Wrestling “Best of the Super Juniors” between Will Osperay and Ricochet, but when he finally got a chance to sit down and watch the match, he was not thrilled with what he saw.

Taking to his official Twitter account, the legend of the squared circle criticized the match heavily, essentially saying it was nothing more than a glorified gymnastics display with nobody trying to win a match or tell a story. To the man they call Vader, this was not only a weak match, it was simply not wrestling.

Of course, Jim Cornette, as he always does, threw in his two cents, taking Vader’s comments a step further and implying that the two men should get out of the wrestling business and become flying acrobats at the circus or something.

The Young Bucks fired back, more or less calling the match’s critics old and out of touch. WWE legend and current NXT commissioner William Regal defended the match saying veterans in his day thought guys like him did too much and Ricochet posted a paragraph on social media explaining how wrestling is an art that has many different forms of expression and is ever evolving.

So who is right here?

Well, in a weird way, everybody.

I watched the match and quite frankly, while I enjoyed it overall, I thought Vader had a point. The entire match wasn’t ridiculous, but parts of it–like the stereo jumping and flipping–did seem to make little sense in the context of a wrestling match. We all know wrestling isn’t on the up and up, but as the great Jerry Jarrett likes to point out, that doesn’t mean we want that fact thrown in our faces all the time. The whole point of wrestling is to get lost in the match and suspend disbelief, which can be hard to do when the pace is too fast for anything to be memorable and nothing seems to hurt anybody.

That said, there WAS a story to the match, albeit perhaps not one that Vader and Jim Cornette cared for much. The story? Two guys, considered by many to be among the best high flyers in the world, went out and spent 20 minutes trying to see who could outdo the other until finally one of them prevailed. It may not be the squared circle’s version of “Citizen Kane,” but it IS a story.

And certainly Regal had a point when talking about how things were when he was breaking into the business. The guys from the generation before always think the current crop does too much, and Vader himself was no exception to this rule. After all, it is hard to believe the late Lou Thesz or Frank Gotch wouldn’t have excoriated the 350-pounder for doing a moonsault off the top rope or even his patented “Vader Bomb.”

Ricochet is also right in that there is more than one way to do a wrestling match and the craft is always changing. Go throughout the history of wrestling and you will see all kinds of styles–British style, Japanese strong style, catch-as-catch-can mat wrestling, harcdore wrestling–the list is endless.

However, that isn’t always a positive thing. Go ask some of the ECW alumni if they wish they hadn’t taken so much abuse, or talk to Kenta Kobashi about the downside of working a physical style that required his body to generally get destroyed on a nightly basis.

Really, though, enjoyable as that stuff was to watch, was it any less preposterous than the Ricochet-Ospreay “gymnastics display?” The same mentality was in play–can you top this?–and in a lot of ways, those styles are just as phony because one shot with a kendo stick, or a well placed bare-fisted haymaker, would knock another man out.

Which brings us to the elephant in the room: real fighting. Sure, we have always had boxing, but it wasn’t until recent years that we were truly given a clear illustration of what pro wrestling would look like if it were legit. MMA changed the game and, especially with the rise of UFC, fans know the difference between real and fake better than they ever have. In pro wrestling, you put a guy in a leg lock and he fights it for minutes. In MMA, the second that hold is applied, the guy taps out.

That’s why wrestling, which has always had to do the uncomfortable tap dance of being “real enough,” can’t be Verne Gagne or Billy Robinson holding a headlock on a guy for twenty minutes anymore. That happens far too often in MMA and if fans wanted that, they would just watch UFC. The pre-determined nature of wrestling is the one advantage they have over MMA in that no matter what the style of match, it can be planned out to be entertaining and creative license can be taken to build a hot story leading into or coming out of the match.

No doubt Jim Cornette–if he could stop whining about Vince Russo or Kevin Dunn for five minutes–would eviscerate me if he ever read what I wrote here, but it doesn’t make it any less true. Just because something isn’t the same as the way it was when you were first coming up in a business, doesn’t necessarily mean it is illegitimate. We all have our preferences and our thoughts on how things should be, but ultimately, the market decides an industry’s evolution.

That’s why movies evolved into using full color and digital special effects. It’s why the NFL evolved into a passing league. It’s why television shows are evolving into streaming content exclusively on the internet and allowing for binge watching instead of weekly episodes.

And it’s why, despite the protest of Detective Lee Butters, the rotary phone and the “Sports Illustrated” phone evolved into the Android and the iPhone.

Which is what I wish people like Cornette and the Young Bucks would fully get their heads around; There are valid points on both sides, and that is ok. Having a spirited debate can be fun, but sometimes, instead of getting upset and calling other people names, it is perfectly acceptable to just agree to disagree.

Or as the great Dennis Miller once lamented, “Whatever happened to the genteel art of sitting back and letting someone go on and on thinking he’s right while you bask securely in the power of the knowledge that he or she is completely full of s—?”

Forget wrestling, THAT is a lost art form.

Of course, that’s just my opinion.  I could be wrong.

Check out the now infamous match between Will Ospreay and Ricochet, and let us know what you think.