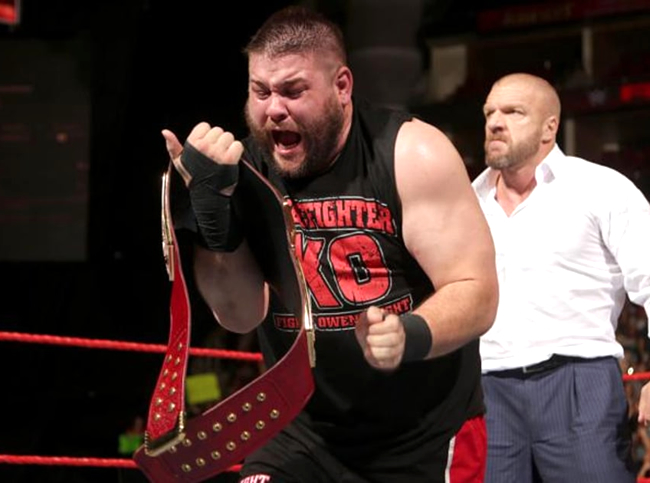 “I can’t stand it, I know you planned it
I’m gonna set it straight, this watergate
I can’t stand rocking when I’m in here
Because your crystal ball ain’t so crystal clear
So while you sit back and wonder why
I got this f—ing thorn in my side
Oh my God, it’s a mirage
I’m tellin’ y’all it’s sabotage” – Beastie Boys, “Sabotage”

The longtime Ring of Honor star, who took NXT by storm when he arrived in 2014 and debuted in WWE the following year in tremendous fashion by defeating John Cena, won an excellent four-way battle for the WWE Universal Title on Monday, a championship vacated by Finn Balor after an injury put him on the shelf until 2017.

Owens is a fresh face at the top, something WWE desperately needs, and he should be able to have excellent championship matches and cut really good promos to boot.

But let’s be honest: he’s not really the champion.

Sure, Owens has the belt and he will have the matches, but anybody watching Monday night knows damn well what’s really going on.

Big Cass was eliminated early and the bulk of the match consisted of Owens being a background actor in a movie starring Seth Rollins and Roman Reigns. Then HHH returned, pedigreed them both, and Owens was essentially handed the title as an afterthought and only because he was on the receiving end of HHH’s generosity.

Despite the really good match, the whole setup here was a mess from the jump. Big Cass is too green and while he may amount to something eventually, he’s not ready to headline house shows, let alone Raw and PPV.

And unless the company wanted a locker room full of pissed off wrestlers–who were not exactly going to be thrilled if  the title had gone to either a guy who failed a wellness test, or one who has developed a reputation for injuring talent–by process of elimination, that left Owens.

Owens is an excellent talent and certainly deserving of a shot on top, but a week ago he was wrestling an opening card tag match with Chris Jericho at Summerslam. Granted, the company had no way of knowing Balor was going to get hurt, but even if he had stayed healthy, Owens–who is a top flight heel and had a great feud with Balor in NXT–should have been protected and pushed as an eventual challenger to the Demon King.

But, you know, he’s fat, and as good ol’ JR once told Samoa Joe–who is still in developmental for reasons even the late Robert Stack couldn’t explain–this is a cosmetic business, son.

So the company turned to Owens not because of any faith they have in him, but because they really had no other choice at the moment.

However, just like on Monday, he will be nothing more than a background prop in a HHH-Rollins or HHH-Reigns feud. And when ratings don’t jump because Owens is booked like an impotent coward who needs HHH to fight all his battles, or because–like CM Punk’s reign several years ago–he isn’t even booked at the top of the card, they will blame the “fat guy” and hope fans and wrestlers don’t revolt when they put the belt back on their golden boy, Roman Reigns.

This is nothing new in WWE. If the company doesn’t believe in you, it won’t matter what you do, because you are never going to be the top dog. You may get the title but you will not be the long term focus of the promotion.

The aforementioned CM Punk didn’t headline a single PPV during his title run that wasn’t against John Cena or the Rock. Even Daniel Bryan, as amazing as his rise was, spent his first post-Wrestlemania PPV as champ working a glorified mid-card match with Kane while the focus laid on the Shield vs Evolution.

It is a shame, because Kevin Owens has spent 16 years wrestling all over the world for every promotion under the sun earning his chance.

A chance he will never get.

So, sit back, relax, and enjoy the mirage of Kevin Owens’ brief championship run. Just know that when McMahon and company have talked themselves into the fact that it isn’t working, it won’t be Owens fault, because he was set up to fail from the very first minute he was given the title.