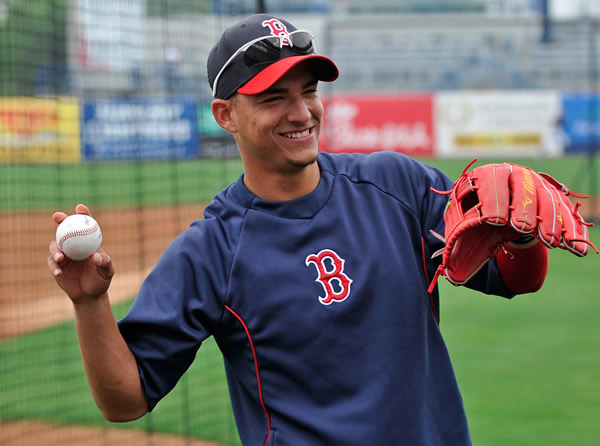 I was looking through my many cable channels the other day, searching for a good Abbot and Costello movie, when I came upon another of those interchangeable pretty blondes on the MLB Network, doing a piece on current Detroit, and one time “future” Boston shortstop, Jose Iglesias. What caught my attention was that she referenced the 2013 three-team deal that resulted in his ending up on the Tigers, and said how sure she was that the Sox would, “Certainly want that one back!” It caught me by surprise, because in all honesty, I’m not sure that’s necessarily true. Allow me to explain…

I had to go back and look up the transaction because I honestly couldn’t remember who was involved and who ended up on the Sox. Given that it happened in the heart of the pennant race, I assumed it was for a pitcher, and in fact it turned out that it was RHP Jake Peavy (pictured), who Boston received from Chicago. You may remember Peavy for buying the Duck boat in which he rode following a very successful post season to which he had contributed three victories. It was also the very same post season in which Iglesias made a key error in the sixth game of the ALCS, which prolonged the inning, which in turn gave Shane Victorino the opportunity to hit his game and series deciding grand slam. Granted, to anyone outside of New England this may seem like ancient history, but to Red Sox Nation, it’s still quite fresh in our collective memory.

Although the emergence of the 22 year old Xander Bogaerts (.302 BA, .988 FPCT) as an All Star caliber shortstop in his own right this year has helped to blunt any pangs of regret over giving up on the 25 year old Cuban-born infielder, I’ll have to admit a left side of the infield made up of Bogaerts and Iglesias certainly would have been nice. Actually, I remember predicting in this space that I expected that the Sox would move former third baseman Will Middlebrooks (pictured) to first, install Bogearts at third, Iglasias at short, which along with Dustin Pedoria at second, would give them a very nice looking infield for a very long time to come. Of course, I wasn’t expecting Middlebrooks to go from a .288 hitter with 15 HRs as a rookie to the .212 hitter he currently is, but then who did? Also in retrospect, given Iglesias’ history of injuries,  he may well have been better suited for third base, and that in fact, leads me back to my initial point which is why it is too early for the Sox to “…want that one back.”

Iglesias has yet to prove he is durable enough to be counted on over the long haul. Remember he missed all of last year because of stress fracture and has yet to play a full season. His best year to date was 2013, when he played in 109 games. So I have to believe that, until he convincingly proves his durability, and Xander maintains his, Red Sox Nation, at least in this case, will likely be more than content with watching Bogaerts channel his inner Jeter, and not worry about the one who got away.

I think it is at least mildly ironic that Will Middlebrooks is being used as a shortstop by his current team, the San Diego Padres.