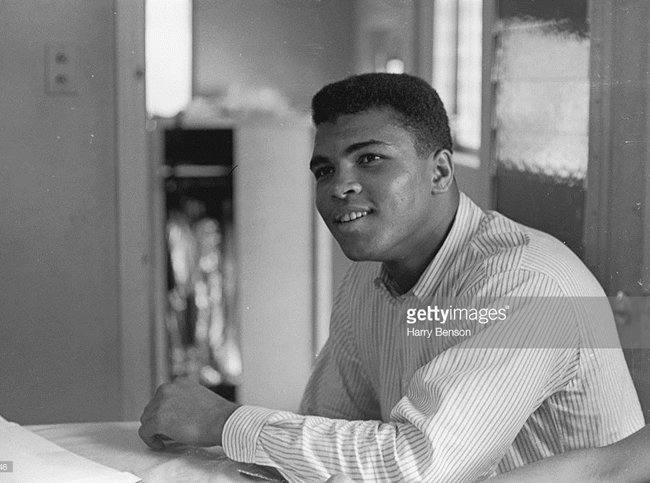 Having been born right in the middle of the the 20th century, and a sports fan from the very beginning, I can honestly say I have seen many of the greatest of all time. Many of them, like Bill Russell, Jim Brown, John Unitas, Ted Williams, and Bobby Orr, changed their games forever. Others, such as Jackie Robinson and Billy Jean King helped to change the way a nation thought. Muhammad Ali’s effect not only revolutionized his sport, it helped to shape this country, and was felt all over the world.

I’m sure by this point you are familiar enough with the particulars of his life to make it unnecessary for me to rehash them here. But I’m not sure all the tributes you see on TV really provide you with the context into which he exploded. He was big and brash in a time when athletes were suppose to be quiet, low key, and essentially underpaid. Back then, heavyweight fighters were expected to stand toe to toe, exchanging punches, until one of them drop. “Dancing” around was looked upon as cowardice. Trash talking or bragging was considered bad form or mean spirited, even when you could back it up.

I have to admit, I had mixed feelings about Cassius Marcellus Clay, Jr.  in the beginning. Perhaps because I had gotten used to the quiet dignity of a Jim Brown or Bill Russell. Despite the esteem Ted Williams was held in in these parts, he was still roundly criticized for his displays of emotion and anger, probably because much of it was aimed at the press, as it just wasn’t something that was expected. I think it was in March, 1966, that my respect and appreciation for the then Muhammad Ali, really took form, as that was when he refused to step forward to be drafted.

It’s often difficult to explain to anyone who did not come of age in the 1960’s just how different things were, especially for poor or working class young men, and most especially for young black men. The Vietnam War was very unpopular and highly controversial. The Selective Service Draft conscripted young men, usually between 18 and 20 years of age, for service in the U.S. Army. However, if you could afford college, or if your family knew the right people, you could usually get deferred, thus leaving it to the poor kids to do most of the fighting and dying. This takes on extra meaning when you remember that this is all taking place in the mist of the battle for Civil Rights. So when Ali took his stand, a stand that cost him four years of his career, he not only guaranteed that he would be forever a National sports legend, but also an International political and cultural legend, as well.

I believe, as well, that the four years he lost in what should have been the prime of his career, likely led to the Parkinson’s that so adversely effected his health and likely shortened his life. When he was at his best, “floating like a butterfly, stinging like a bee”, he was very difficult to hit. He took pride in his “beauty”,  protecting his face and his brain. So maybe, if he has those four years, he makes his money and gets out before his skills erode. I realize that there is no real way of knowing that for certain. Nor, I suppose, is there any way of knowing whether or not it had to take four years for his case to be resolved. All I know for certain is that I feel cheated out of missing those four years at his best, and cheated that he’s gone so soon.