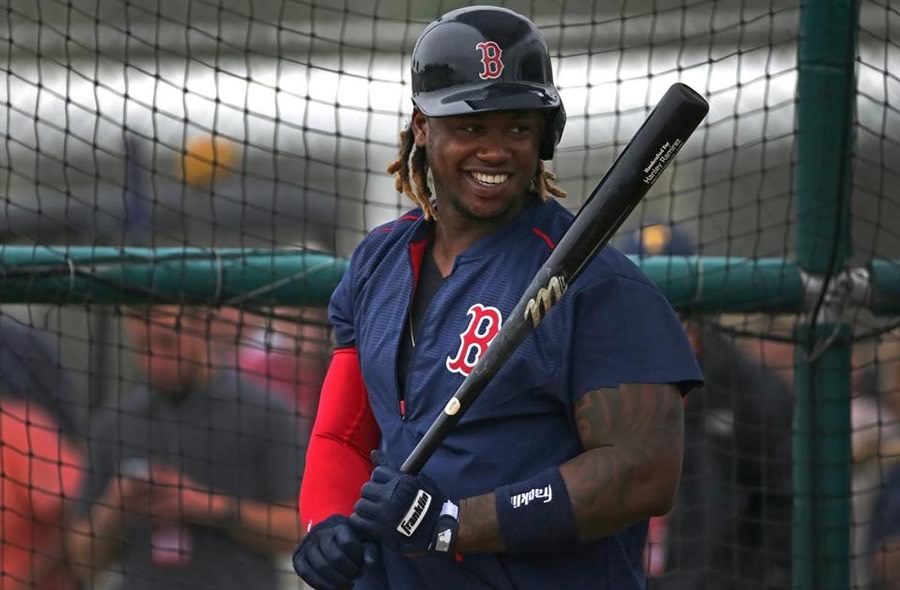 I believe that I have covered the failures of the 2014 Boston Red Sox enough, both collectively and individually,  that it’s not necessary to take another look at the part the outfield played in their collapse. Let’s just say that for the most part they were undersized, under-productive and just plain underwhelming. Even the additions of Allen Craig and Yoenis Cespedes could not shake them from their funk. But now, even though significant questions remain, it is clear that big things are expected from their revamped outfield.

Part of General Manager Ben Cherington’s answer to solving last year’s lack of production issue was to sign former Boston prospect Hanley Ramirez (pictured) away from the Dodgers to play left, and to add Cuban free agent Rusney Castillo to play center. Although the Sox have over $70 million tied up in the latter, he is still going to have to prove he can make the transition to the outfield, otherwise that spot might go to their only true potential lead off hitter, Mookie Betts. It appears that the only relatively sure thing in all this is that the 31 year old Ramirez is going to be the starting left fielder, as he has been working hard to learn the new position and has put on an additional 25 pounds of muscle on his 6’2″, now 225 pound frame to be more like that other Ramirez who used to guard the “Monster.” Boston is also hoping to get more than the 128 games out of him that he played last year, and that he matches career best in home runs (33, in’08), as well as RBI (106, 2010). He is, by the way, a career .300 hitter, so Fenway should be a good place for him. Let’s hope he is not a defensive liability in some of the bigger parks when they are on the road.

As for Castillo, Spring Training is going to be crucial. He had a nice tryout of sorts at the tail end of last season when he played in 10 games, going 12/36, with 2 homers, 6 RBIs, and 3 steals, but that’s just not much of a sample size. Reports on the 27 year old from the Fall and Winter leagues were positive. Should he falter though, it appears that the Sox would not hesitate to start the year with the 5’9″, 155 pound Betts in center field, and bat him at the top of the order. The 22 year old played in 52 games last year, scoring 34 runs while hitting .291, with 5 HRs, 18 RBI and 7 stolen bases in 10 attempts.

The 34 year old Shane Victorino appears to be the early favorite to get most of the playing time in right field, assuming he can stay healthy. A return to switch hitting may help him return to his 2013, championship season form when, in 122 games, he hit .294, with 82 runs, 21 stolen bases, 15 HRs and 61 RBI. A fierce competitor, his personality was truly missed last year. I would also expect to see both Betts and Allen Craig get some time in right during Spring Training. Craig could be a key player in all this if he too can return to his 2013 form, which saw the 30 year old, 6’2″, 215 pound 1B/OF, hit .315 in 134 games with 13 HRs and 97 RBI as a member of the St. Louis Cardinals. Early reports seem to indicate that he has recovered from the foot injury that is generally believed to be the cause of his sub .200 batting performance with the Sox last season. Could get interesting…

Speaking of interesting, you may like to know that WEEI radio Red Sox Insider Rob Bradford has picked last year’s CF Jackie Bradley as this year’s biggest surprise. Apparently, Bradley has been working with a hitting coach who has helped him recapture the quicker, line drive producing swing that made him the media darling of the 2013 Spring Training season. If you could combine that with his outstanding defense, then the soon-to-be 25 year old could be an attractive trading piece for some pitching help.

Speaking of pitching help… No let’s save that for next time. Let’s just end this piece by saying that the next few weeks should be very interesting, and should go a long way to determining who starts, who stays and who might find themselves headed out of town.