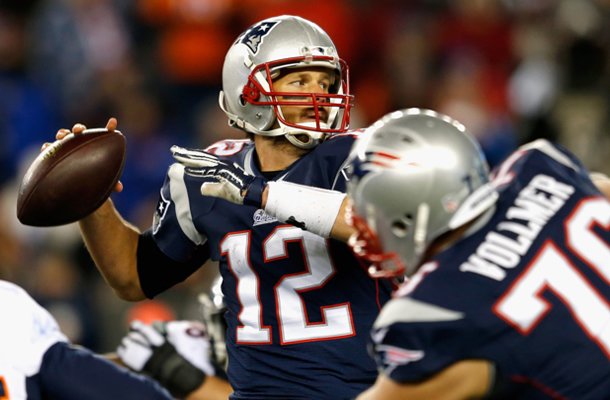 There were two events going on last week in the USA that were pretty much impossible for just about every person living here to ignore. Event number one consisted of the mid-term elections. With its barrage of attack ads and robo-calls, exposure was constant, but yet only slightly more so than the much hyped Manning vs. Brady, aka Denver at New England, rematch. Although I am somewhat less than thrilled with most of the results of the former, I am rather pleased with the latter, and happy to have called the 43-21 victory correctly. Surprised that it was even more one sided than I would have anticipated, I’m indeed very satisfied. Of course for now, satisfaction is about the only thing Patriots fans can claim, because as Bill Belichick likes to say, “You don’t get anything for winning your 7th game.”

Given that last Sunday’s game was, according Chad Finn of the Boston Globe, the second most watched game of the season on any network, and the third most watched game on CBS since 1998, I’m going to assume that you watched it, or at least large portions of it. Even if you did the impossible and managed to ignore it, then I’m sure you been inundated with post game analysis on all the various sport outlets, so I won’t take up too much more of time with my version of things. I will though take the opportunity to highlight a few names, especially on the defensive side of the ball, who made significant contributions, and have become key to their success.

THE RETURN OF PATRICK CHUNG:

Chung was a second round drift pick out of Oregon, in 2009. After four rather undistinguished seasons with the Pats, the 5’11’, 210 pound safety was essentially allowed to leave and signed with his former college coach, Chip Kelly, and the Philadelphia Eagles. That lasted about a year, when he was released and then resigned by the Pats. My reaction at the time was that Belichick was just adding him as an extra training camp body. Granted, they’ve been looking for another safety since the failure of the Steve Gregory experiment, but I honestly never thought it would be him. Fortunately, I was wrong. He had  a strong performance on pass coverage against Denver, matching up rather successfully for the most part, and was credited with 3 breakups. The Pats’ 4th leading tackler with, 46, he had 6 solo and 2 assisted tackles, last Sunday. Along with the play of Devin McCourty at the other safety, and Brandon Browner and Darrelle Revis at the corners, New England has been getting some very solid secondary play, so far this season.

The addition of LB Akeem Ayers recently from Tennessee, certainly was a significant one. He has stepped right in for the injured Chandler Jones at the defensive end position, playing 74 out of 82 snaps last Sunday, and racking up his second sack in two games, this one coming on a critical fourth down play. The 6’3″, 255 pound ‘backer, who played his college ball at UCLA, is certainly going to make it difficult for Jones to get his job back, and should provide more than a few offensive coordinators with something to worry about, going forward.

I don’t know if professional football coaches give out an unsung hero award trophy at the end of the season like they do in high school, but if they do, then the Patriots’ one should go to Rob Ninkovich.The 6’2′, 260 pound defensive end always seems to be around the ball. Against Manning, Belichick had him drop back into coverage, resulting in an interception and 11 yard run back that set up a touchdown, and clearly had the veteran quarterback rattled. He is the team’s fifth leading tackler, with 35 to date.

One of the most consisted elements of any Bill Belichick coached team, is the outstanding play of his special teams unit. It also gives newcomers, such as linebacker Jonathan Casillas, an opportunity to contribute while they are learning the system. According to the Boston Globe’s Ben Volin, against the Broncos, Casilla made the tackle on three straight kickoffs.The unit, which is captained by Matthew Slater, son of Hall of Famer, Jackie Slater, gets outstanding play from running back Brandon Bolden (pictured), who has caused at least one fumble, as well as DB Nate Ebner. As Belichick is so fond of saying, “It’s important to win in all three phases of the game.” Who am I to argue?

It’s always nice to have your team go to its bye week following a win, and they rarely come much better than this. But, as “The Coach” pointed out they’ve not accomplished anything yet, they still have half a season to go, and things are going to get tougher starting with the Colts in Indianapolis, on the 16th. I guess we’re just going to have to stay tuned…