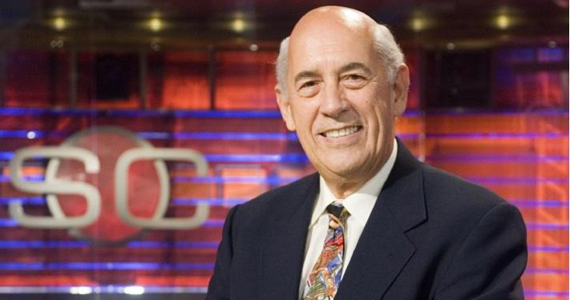 Jerry’s history lesson today, is about how he invented ESPN and his concerns about the DH and superstar NBA refs.

My sophomore year in college ran from September, 1969, through the middle of May, 1970. Extend that by a few months in either direction, and you have one of the most fascinating  times in American cultural and political history. The Summer of ’69, saw the first men to walk on the moon, as well as a famous music festival in up-state New York. (No, I did not go. I had to work that weekend.) The Fall saw the rise of the “Amazing Mets”, who with the help of some amazing fielding my Tommie Agee, upset the Baltimore Orioles in the World Series. December 1, 1969, will forever be remembered by men who were born from 1944 through 1950, as that was when the  Selective Service went to the Lottery System that eventually did away with the military draft. (Seeing that the Vietnam conflict was at its peek at this point; this event had our full attention.) The Winter saw Bill Russell win his eleventh title with the Boston Celtics, and the Kansas City Chiefs win the AFL’s second straight Super Bowl, when they knocked off the heavily favored Vikings, 23-7. Come May, it was back to reality, as military actions in Southeast Asia led to protests on many college campuses and the National Guard shooting of four students at Kent State, in Ohio.

It was late Fall, when I gave Bill Rasmussen (pictured above) the idea that would, nine years later, become ESPN. Mr. Rasmussen, at that time was a sportscaster for WWLP, Channel 22, in Springfield, and also a part instructor of Physical Education at Westfield State College, in Westfield, Massachusetts. One morning, over a rousing game of badminton, I commented to Bill that what us sports fans needed was a network totally dedicated to sports, you know, like 24 hours of nothing but sports. He looked at me and said, “You watch too much TV kid!” He then went on to kick my butt 21-3, and then gave me a ‘C’ for the course! So you can imagine my surprise when in 1979, ESPN was born and Rasmussen was its co-founder and first president! His moment of glory was soon gone, however, (not too mention his chance at riches)  as he was forced out in 1980, selling all his stock shortly there after.

So, as the saying goes, “That’s my story, and I’m sticking to it!”. Actually, much of what I wrote in the last paragraph is true. I had Bill Rasmussen as an instructor at WSC, he was an athletic and outgoing individual who was in television; and he really didn’t profit very much from ESPN. Although I can’t actually prove the part about my suggesting the network, all those years of being around college kids must have inspired him to do something crazy….

In keeping with the theme, I want to take this opportunity to say that nothing bores me more in sports than watching pitchers bat. I had a couple of decades of experiencing it, and I’m here to cast my vote for making the DH permanent in both leagues. I realize that there are a few hurlers who can “help themselves” by occasionally getting a hit, but you are far more likely to see every third inning turn into something unwatchable. Please Bud, not at these prices! I’d much rather see Orlando Cepeda extend his career in Boston, or Ron Blomberg before he was mayor of New York, than someone like A.J. Burnett swing a bat. Please Bud, make it official.

I need to tip my hat to Red Sox reliever Scott Atchison. The graying, 36 year old middle reliever has been one of the pillars of the Sox bullpen so far this season. As I write this, he’s sporting a 0.92 ERA, and has gone something like 17 straight innings without allowing a run. If there is one thing Bobby V. is getting credit for, it’s his handling of the bullpen. If the starting pitching could just perform with some more consistency, it would certainly help to keep the Sox above .500, despite their injuries.

If there is something getting very old, besides the Celtics, it’s basketball official thinking they are part of the reason people go to NBA games. Five technicals in a championship game?! Really? Slapping Kobe with a ‘T’ in a crucial playoff game! Really? I think the NBA needs to either go back to two officials, or go to ten to have one for each player. But whatever you do Mr. Stern, please do it soon, for to do nothing, is just too big a gamble.