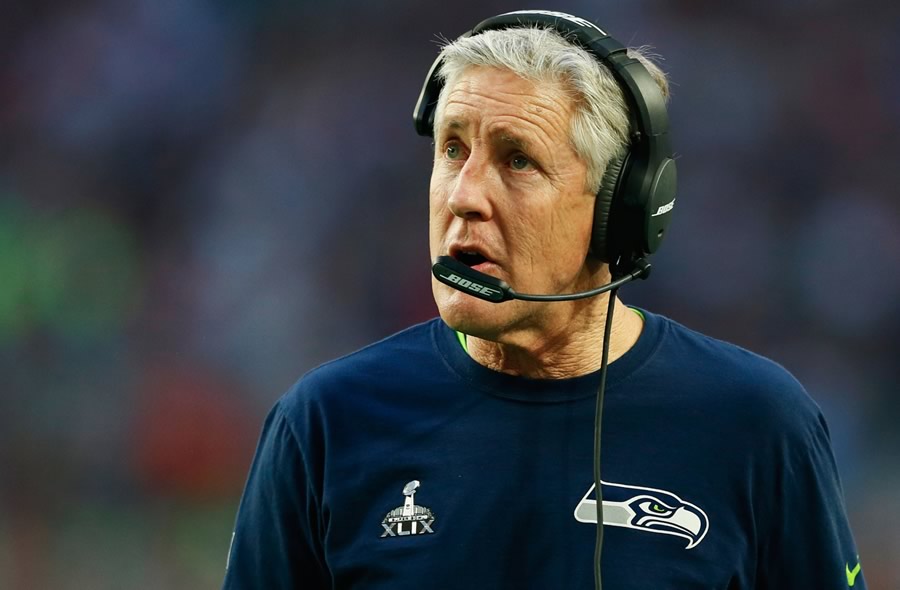 [dropcap]L[/dropcap]ast night’s Super Bowl XLIX was one of the better games in recent memory, punctuated by a few very memorable, albeit baffling moments. As Jobu so eloquently noted earlier, none of those decisions looms larger than the play call to pass on second and goal from the half-yard line, with 20+ seconds still on the clock and one of the best running backs in the league in the backfield. This decision cost the Seahawks the Super Bowl, period. But rather than dwell on this obviously horrible decision that backfired, I will instead try and explore why this terrible decision was made.

In his postgame press conference, Pete Carroll said that the defense setting up for a goal-line stand didn’t match up well, so they set up the pass play as a “wasted play” that would potentially end with an incomplete pass, after which they would have then tried to run. Again, without trying to make sense out of such nonsense, let’s look at the true reason they called the pass play, the reason that he doesn’t want to admit.

After Jermaine Kearse, with a little bit of luck behind him, made this absurd catch to put the ball down inside the five-yard line, it seemed almost like a foregone conclusion that they would score a touchdown and the Patriots would once again lose a Super Bowl on a crazy, once-in-a-lifetime catch. It is my theory that Pete Carroll and his coaching staff also had this foregone conclusion. They blurred the lines between Hollywood and common sense. Had this been a Hollywood movie, the QB makes the throw and is carried off on his teammates’ shoulders. Pete Carroll and the coaching staff love Russell Wilson and wanted him to have that “moment of glory.” What they failed to consider, obviously, is that the other team might actually try and stop them, and that passing the ball in that instance made about as much sense as a guy with a gluten allergy downing a loaf of garlic bread. Had they done the logical thing and just tried to pound the football into the end zone with Beast Mode, maybe the Patriots still stop them three times in a row to win the Super Bowl, but probably not. And I guarantee nobody would have questioned that choice.

Other Thoughts from the Game

How was Tom Brady the MVP? Yes, I understand that he threw four TD passes, and set a record for most completed passes in a game, but that’s not totally shocking considering he had 648 pass attempts. More importantly, he had two big interceptions which may have prevented them from winning that game more handily. I understand that not a lot of individuals separated themselves from the pack, but you could easily make a case for Julian Edelman, AKA Welker 2.0, who had over 100 yards and the winning score. Or, how about Malcolm Butler, the guy who literally won the game with his huge interception? I think the MVP voters automatically go to the QB as a default. Of the last 10 Super Bowl MVPs, including last night, seven were quarterbacks.

The commercials were pretty poor overall. Really, Nationwide? Really? Why don’t you just kick our pets and tell the Children’s Hospital that there’s no Santa Claus? And where were the beer commercials? Usually they have a stronger presence. Instead, I feel like there were only car commercials or sentimental commercials about parents or pets or children.

Has there been a Super Bowl in recent memory with two teams so universally disliked? The Patriots didn’t even need help from Deflategate, though that definitely put a few more people in the Seahawks’ corner. And then of course Bob Kraft had to reference it in his postgame comments, so if you didn’t already hate the Pats, you probably did then. But who am I kidding? Of course you already hated the Pats (unless you’re a Pats fan).

The Seahawks should have won that game, but they got a little too cocky. If Pete Carroll had realized this wasn’t Varsity Blues (and Russell Wilson, though good, is no Van Der Beek), then the Seahawks probably win and everyone is singing their praises. But the games aren’t played on a Hollywood set, and now Pete Carroll and the rest of the Seahawks have to dwell on that over the next few months.

A gentleman's scholar, the good doctor first turned the sporting world upside down when he introduced the concept of "hydration." Now, he shares his witty rhetoric and curmudgeonly attitude with anyone who will listen.