Warning: "continue" targeting switch is equivalent to "break". Did you mean to use "continue 2"? in /nfs/c11/h04/mnt/193474/domains/jobusrum.com/html/wp-content/plugins/wp-author-box-lite/includes/ReduxFramework/ReduxCore/inc/extensions/customizer/extension_customizer.php on line 478
 The Salt City Report: Final Four Recap, National Semi-finals | Jobu's Rum
Skip to content 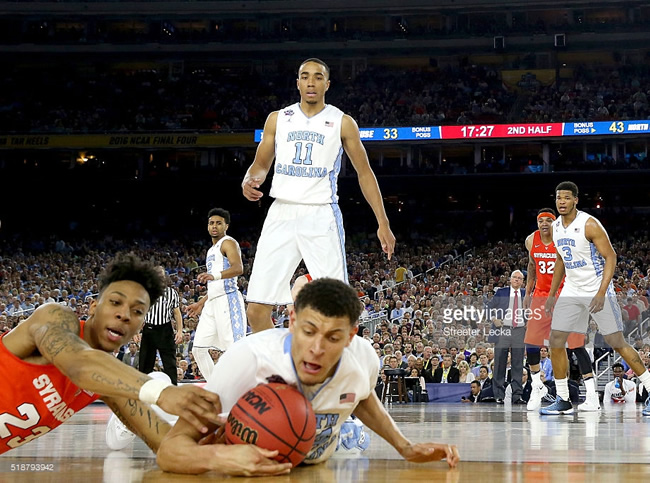 The first leg of the NCAA Final Four in the books. Let’s look back at match ups between Villanova and Oklahoma and Syracuse and North Carolina. and see what transpired over the weekend.

Game 1: Villanova vs Oklahoma: The Rematch

Well for those who either are Oklahoma Sooners fans, or were rooting for Oklahoma because you had them advancing to the national title game, I am terribly, terribly sorry. In what was a rematch from a game earlier this season in which Oklahoma beat Villanova by 23, Villanova absolutely destroyed Oklahoma, 95-51. That turned out to be the largest margin of victory in a national semifinal game… ever! Nova shot a staggering 71.4% from the floor, the 2nd highest field goal percentage in an NCAA tournament game. The only other team to do better was also Villanova, when they shot 78% in the 1985 title game against heavily favored Georgetown.

For just a few minutes early on in the second half, the Wildcats seemed to sputter and Oklahoma looked poised to make this a game, trimming the lead to 9. However, you got the sense right away that this was simply not going to be the Sooners night. On one possession in particular, Oklahoma attempted six shots, off of five offensive rebounds, and didn’t score a single basket… ouch.  The game started to get out of reach when Villanova kept making shots. Even the most improbable of shots were going in. The icing on the cake for this game would occur with about 13 minutes to play in the 2nd half… Yes, 13 minutes! Wildcats guard Josh Hart (23 points, 8 rebounds 10/12 FG) was pressed by the Sooners defense, struggled to find the open teammate and, as Oklahoma fans began to get loud in hopes of a travel, Hart turned around and tossed up a fadeaway jump shot… nothing but net. It was just that kind of night.

Villanova did a great job scoring against Oklahoma, as they averaged roughly 1.5 points per possession in the game. They also held National player of the year, and Naismath trophy winner, Buddy Hield to 1 of 8 from beyond the 3 point line, and 4 of 12 from the field–good for only 9 points. Not good for a player who averaged 24.5 points a game throughout the season! 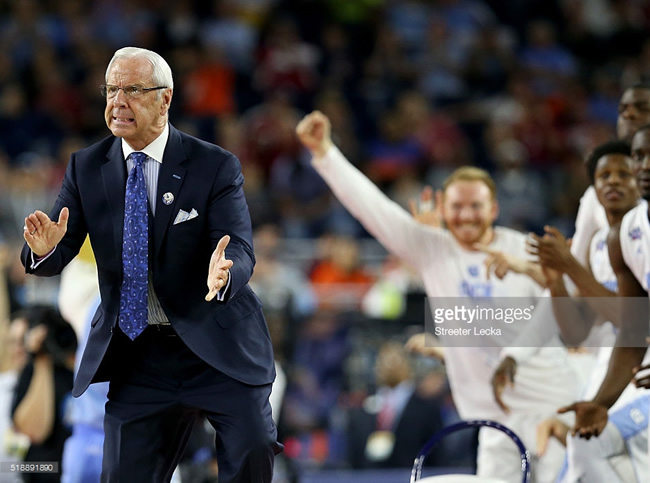 For being a guy who is such a diehard Syracuse Orange fan, it is hard for even me to believe that the Orange ever got to the Final Four in the first place. That makes the season and outcome that much more humbling for a fan like myself. As I clearly mentioned in my last post, it was a quite an impressive feat for Syracuse. The Orange put up a valiant effort, but in the end it just simply was not enough, as they fell 83-66 to North Carolina, who advances to the national title game against Villanova. The Orange could not stop the Tar Heels. They were too big, too fast and just simply too much.

Syracuse would have had to the perfect game to win this, and they just didn’t. The defense actually kept them afloat in this one. The 2-3 zone actually worked for 10 minutes in the first half. UNC was inconsistent against the zone, and was shooting 0-9 from behind the 3 point line, and the game was tied at 18 with about 7 minutes to go in the 1st half. However, this was where UNC head coach Roy Willams made a smart time out call and made the adjustments UNC needed. The Tar Heels soon found themselves with a sound 39-28 lead going into the half. This was in large part due to their ability to get points in the paint.

North Carolina found its 3-point shot in the 2nd half. They hit four 3-pointers in very key moments of the game, which pretty much put things out of reach. It seemed like any time Syracuse started a rally (the Orange got within 7), the Tar Heels would hit them with a dagger. Brice Johnson and Kennedy Meeks began to unravel the Syracuse 2-3 zone. North Carolina was finally able to make shots from beyond the arc, and as a result, they found more space inside the zone, and built a 50-32 advantage in points in the paint. In reality, that was the key to UNC beating the Orange.

Syracuse tried to make a late run, but North Carolina met them with everything that they could put up, and the Orange finally lost. For all the bracketologists out there and all haters that said SU didn’t belong, all was finally right in the college basketball world. It was a game that Cuse should have lost. Even coach Jim Boeheim would later admit that that, statistically speaking, “the Orange should have never gotten out of the Gonzaga and Virginia games with a win”.

But hey…..good coaching, a controversial out-of-bounds violation against Gonzaga and a 25-4 run against Virginia built a magical run. It was a hell of a run, Cuse! I could not be more proud to be a fan of this team, and I’m looking forward to watching what this team might do next year. As for North Carolina, hopefully the Wildcats don’t hit over 70% from the floor against them! Good luck, guys!