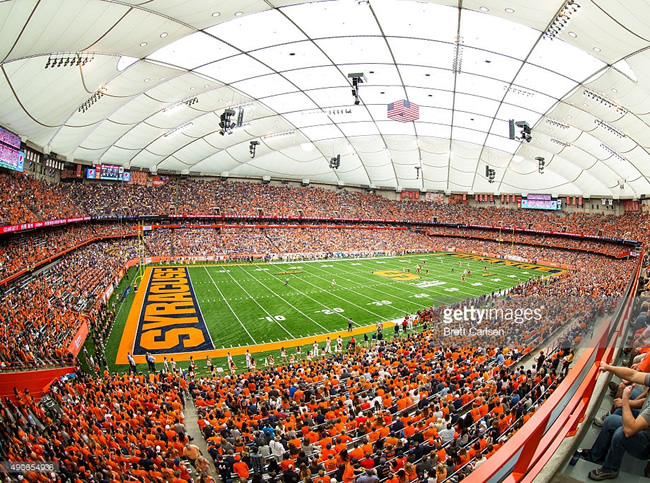 College Football is finally upon us! Week 1 of the 2016-2017 college football season finally kicks off for the Syracuse Orange this Friday night. They will look to start the season on a high note, as they set to square off in their home opener against a long standing rival from Hamilton, NY: Colgate University.

History Lesson: The Legend of the Hoodoo 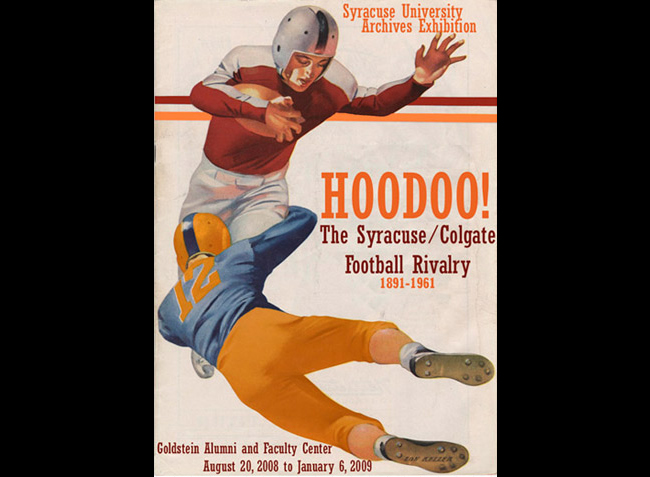 Believe it or not, this was once a fierce rivalry, which came to be in large part because of their close proximity to one another–the universities are separated by only 38 miles. The first game between Colgate and Syracuse was played on November 7, 1891, with Colgate beating Syracuse 22–16. Back then, it was a known fact that Syracuse football was dominated by Colgate, as the Red Raiders won 12 of the first 16 games in the series. Thus, the legend of the Hoodoo was born.

According to the Syracuse archives, the Hoodoo legend is based on a story that, during the construction of Archbold Stadium in 1907, a Colgate student snuck into the construction site and buried a varsity Colgate “C” sweater into the drying cement, thereby “cursing” Syracuse football to failure against the Red Raiders. And for the most part, there seemed to be some truth to this curse. As I mentioned, Colgate beat up on Syracuse in the early years of this rivalry. In fact, ‘Gate won 6 of the 7 match ups after the completion of the stadium.

Like with any good old timey rivalry, soon the pranks began. In all honesty, the pranks that Syracuse and Colgate students would set up on each other were tremendous–very Animal House-ish, with each student body clearly trying to send a message the other school. Colgate students went so far as to rent planes to drop “Hoodoo” flyers to litter the Syracuse campus, which then prompted the Syracuse student body to respond by dropping their own flyers on the Colgate campus. However, the SU student body then upped the ante by pouring orange dye into Colgate’s Taylor Lake, which forced Colgate students to retaliate by renting a plane to drop red paint onto Archbold Stadium. Whats next? Kidnapping the team mascot–most likely some sort of swine, perhaps–and nearly killing it by force feeding a case of malt liquor, only to be discovered by that crusty bitter old dean who would reluctantly have them expelled because that pig had some powerful friends? Will the madness ever stop!?

Anywho, fast forward to the late 1950s. By this point, Syracuse had established itself as a major college football program in the northeast, which made this series a very one-sided affair. For instance, during the 1959 season, Syracuse, which was led by legendary running back Ernie Davis, pounded Colgate 71-0 in route to an undefeated season and the lone national championship that the Syracuse football program has ever won. Following the 1961 season, Colgate terminated the series. Essentially, they took their ball and went home because they were tired of getting crushed. They decided they were going to focus on playing smaller, peer institutions. Or, in other words, beat up on weaker little programs…the cowards.

Head on over to the Syracuse archives for lots more cool stuff about Hoodoo and the rivalry.

Meet Me at the Dome, It’s Goin’ Down.

All in all, Colgate actually leads the series 31-30-5 over the Orange. However, the Orange have handed it to the Red Raiders over the last 15 games, winning every contest and pretty convincingly too. The combined score of the last 10 games between SU and ‘Gate has been 500-73 in favor of Syracuse. With the teams set to face one another for the first time since 2010 this coming Friday night at the Carrier dome, lets see if Syracuse can make it 16 in a row.

Syracuse fans are anxiously awaiting the first game of the season because, contrary to much of what the writers have predicted (that SU should win in a blowout), this is actually a pretty impressive Colgate team. The Red Raiders open up the season ranked in the college football FCS subdivision preseason top 25 (more on that later), which has many of the Syracuse faithful experiencing some reservations. Could there be a chance that this game ends up being a lot closer than it should be? I mean… a team from the Patriot League shouldn’t be an issue right? It’s just a team from an FCS football subdivision right? Orange is the new fast right?!………RIGHT?!

Why Syracuse Should Win

Without going too much into my previous Salt City report, there are many reasons why Syracuse should be able to handle Colgate easily. First off, if you look at the Week 1 depth chart that was released, they’re gonna have no problems scoring points. They have Sophomore sensation Eric Dungey pegged as the starting QB, a talented group of running backs led by Jordan Fredricks and don’tae Strickland, and the Orange are playing under a totally new style of offense under first year head coach Dino Babers. They should be to score some points…and score some points…and score some more points…..did I mention that they should score some points?

As I said last week, when Dino was the head coach at Bowling Green, he had the team ranked 4th in the nation in total offense. Granted, he was coaching against teams in the MAC (Mid-American Conference), but numbers don’t lie. If he can put up anything close to those numbers here with Syracuse, which I think they should, Babers should get his first win as head coach of the Orange, and all of the Syracuse faithful will have reason to celebrate the start of this Labor Day weekend.

How Colgate Could win

So as I alluded to earlier in this post, there are some high expectations for this Red Raiders football team. First of all, they are coming off a 2015 campaign where they won the Patriot League and made it all the way to the quarterfinals of college football FCS playoffs. Because of that performance, they come into this season ranked #23 in the nation in the FCS subdivision.

Most of the starters from 2015 have returned for the 2016 campaign, so they could make some noise again this year. Also, they are led by their dual-threat Quarterback Jake Melville. For those of you who don’t know who Melville is–I mean, I’ll be honest, I didnt either…I had to go look him up–he is the latest of a long line of dual-threat QBs that ‘Gate has boasted. Melville also has a legitimate chance of taking home the Walter Payton award (Most outstanding player in the FCS subdivision) this season. In his 2015 campaign, he threw for 2,552 yards, and 11 touchdowns, while also rushing 186 times for 1,073 yards and another 11 touchdowns. If he can put up similar numbers again this year, he will most likely be in the conversation, and he will most likely be well known to most Orange fans by the end of Friday night.

Brian D, aka the author formerly known as Big league Clu, has returned to bring us the inside scoop on everything Syracuse. All Orange Everything.