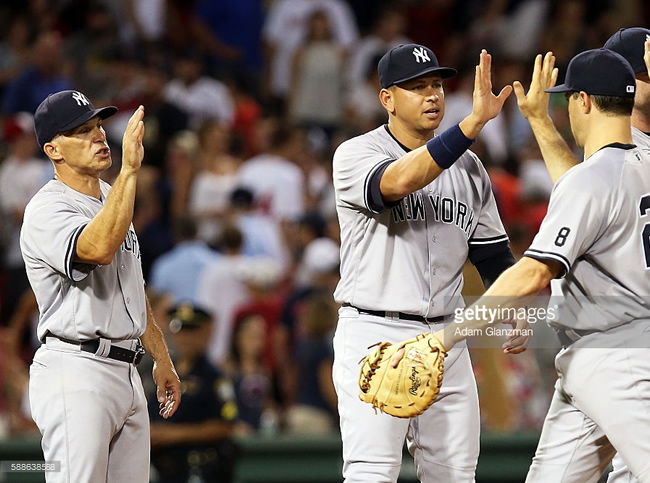 Hello fans! El Bolso is here once again. Well, Jobu is going all out for the Alex Rodriguez “retirement” tour; I’m pretty sure he’s pulling random people off the street to do guest posts on it at this point. Look, my job here is to write about fútbol, but I am a Yankee fan in my everyday life, so I’m gonna break off a sweet, AI-style crossover move and tell you what I think about A-Rod’s last week in pinstripes.

And what I think is this: Joe Girardi ought to be ashamed of himself.

Look, as much as I loved Girardi the player, I’m no fan of Girardi the manager. I’ve lived through nearly 9 years of pulling starters 75 pitches in because… just because; of letting obviously done pitchers start the next inning only to pull them with no outs and 2 runners on base; of handing out those stupid diminutive nicknames (gardy, hicksy, dopey, sneezy, and so on); etc., etc., etc. Girardi is also a man of patterns, which means he’s either going to do the exact same thing every damn time, or he’ll do something ridiculous because as soon as he closes the notebook he’s as lost as Adam on Mother’s Day. So Joe and I are not friends. I’ve been openly calling for him to be fired for about 3 seasons now.

Still, this week Joe hit a new low. After weeks of A-Rod being stuck on the bench (which, no complaint here, because he’s awful) and speculation running rampant about his release, the Yankees did the right thing and “suggested” Alex head off into retirement (I’m guessing Hal Steinbrenner reached into dad’s old assorted thug and hoodlum Rolodex for a special consultant on this one). At the press conference, Joe told the world that he’d let A-Rod play as much as he wanted over the next week, which was a great gesture. You’re talking about one of the greatest ever to play the game being unceremoniously (and let me stress this again, deservedly) dumped, plus this team wouldn’t make the playoffs this season if MLB put CONCACAF’s executive board in charge of league standings. Joe hit all the right notes and did the classy thing. Good for Joe.

Unfortunately, Girardi left the press conference and immediately turned into the guy from Memento. How else to explain A-Rod staying glued to the bench for the next 3 games? I mean, if this is Joe’s idea of a heel turn, it’s a pretty crappy one. Where are the steel chair and secret Sox jersey? When asked about his inconsistent behavior, Girardi said he’d let his emotions take control at the press conference, and in fact couldn’t let A-Rod play because “we’re trying to win games.”

As George Costanza would say, what a load of mah-nuah.

First of all, the whole “my emotions got the better of me” excuse is pretty sad, although it would finally explain Girardi’s bullpen management. You get paid millions of dollars to lead the most successful franchise in the history of sports, you nitwit. Act like you’re in charge!

Second, if Girardi really is “trying to win games” by playing Mark Teixeira (.625 OPS, 69 OPS+ on the season) and Aaron Hicks (.550, 48), then he’s a god damn moron. This team has Aaron Judge and Tyler Austin mashing like BAWSSES down in AAA, killing time until September call-ups, and Joe spends his afternoons writing the Artist Formerly Known as Tex and Dante Hicks (no disrespect to Dante, who wasn’t even supposed to be in today’s post) into his lineup, and I’m supposed to believe he’s trying to win games? Please.

And third, did I mention that this is an awful team going nowhere and A-Rod is 4 homers away from 700? Don’t worry Hal, there’s no bonus attached. Couldn’t we stop pretending this team has a chance for 5 days so Alex can have a far-fetched shot at history?

Of course, El Bolso doesn’t believe Joe’s excuse for a second. I think he meant what he said at the press conference, and was promptly taken aside by certain people (I don’t want to mention names, but… oh screw it, Hal and Randy Levine) and told to backtrack. Why? Because the Yankees front office hates A-Rod with the passion of a thousand suns, and their pettiness makes Donald Trump look like someone who takes criticism well. The Yankees don’t want Alex to have any sort of grand moment in this last week. They want him broken, beaten and bloody. I bet next season’s much talked-about consultant role will involve lots of coffee fetching and boot shining. So they leaned on Girardi, and Joe listened.

So what we’ve got here is not an indecisive, over-emotional manager who cares too much about his players. No, this is a spineless toady who knows he’s got a good shot at getting canned if we judge him on merit (did I mention the Yankees are about to miss the playoffs for the 4th time in Girardi’s 9 seasons as manager, and one of those other times they were in the postseason for about 2 and a half hours?). So he’s going to do his best to keep his superiors happy so he gets to hang around a little while longer. And if that means being so shady as to make Alex EFFING Rodriguez into a sympathetic figure, then so be it. Anything to stay in the Hal Circle of Trust.

For shame, Joe. I’m beyond expecting competence from you at this point, but I thought you would at least have some integrity left.