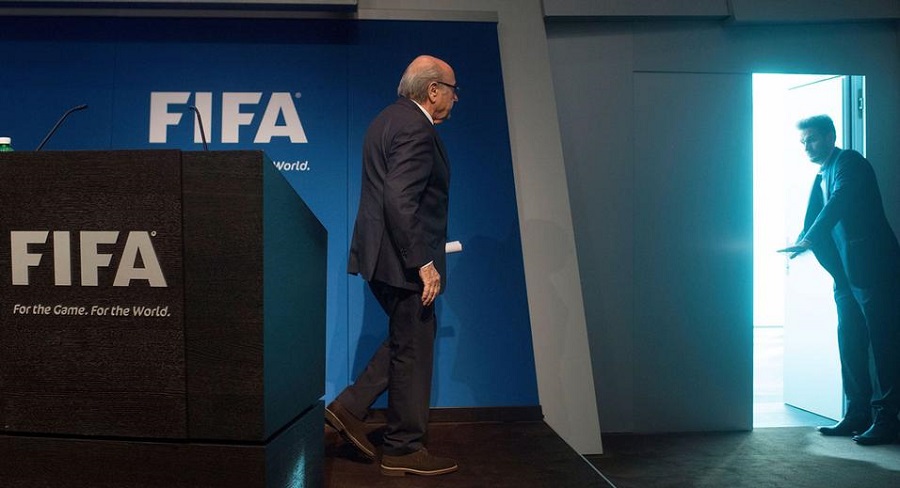 Hello fans, El Bolso is here with yet another special report, because HOLY CRAP! BLATTER RESIGNED!!!

Yes, Sepp Blatter, who has been FIFA President since 1998 and just last week came out on top in an… um, shall we say eventful election, called a surprise press conference on Tuesday to announce that he was stepping down “for the good of the game,” which translated from FIFA-ese means “to keep my jolly white butt out of jail.”

First of all, let’s take a moment to reflect on this shocking turn of events:

So why would Blatter do this just a week after vowing to lead FIFA out of the shadow of scandal and into a new era of peace, justice and transparency? Well, some would say that’s exactly what he’s doing, since it is widely believed that he was part and parcel of the endemic institutional corruption that led to the arrests last week. Others, like me, think it’s a combination of the Valcke letter (more on that in a second) and the belief that he was going to be the next FIFA bigwig doing a perp walk at the FBI’s request. Blatter finally realized that he was not going to be able to make this one go away with a kind word and a few dump trucks full of money (as has been the case with many a previous scandal). He still had the support of his core constituency, as well as FIFA’s resident boot licker, but the storm clouds were still gathering. So he did the only thing he could do: step aside. Either way, El Bolso’s family better get used to the sweet, sweet sounds of Kool and the Gang, because we’re going to celebrate good times.

The beginning of the end came earlier in the week, when evidence surfaced of a $10 million payment to CONCACAF’s Jack Warner from the South African Football Association, made in 2008. Hey, wasn’t that around the time South Africa was getting ready to host a World Cup? Why yes it was. And weren’t CONCACAF votes instrumental in awarding that tournament to South Africa in the first place? Yes they were! More importantly for Blatter, however, was that the evidence of the payment was a letter from the SAFF to FIFA VP Jerome Valcke requesting disbursement of the funds. Who’s Jerome Valcke, you say? This guy:

Here’s a bribing pro-tip for you: don’t write letters asking people to pay out the bribe. Don’t send emails. Don’t talk on an unsecured phone line. If you have to go through intermediaries, meet them in a dark alley somewhere, and speak in code. Anyway, with Blatter’s right hand man involved, the pressure on him to resign increased, so FIFA did what they do best; they deflected blame, claiming that the payment had been approved by Julio Grondona, the long-time head of the Argentinian football Federation and SVP at FIFA. Grondona was a logical choice for several reasons: first of all, his position at FIFA made it likely that he would be involved in this type of transaction. Second, he has a reputation as one of the shadiest people in international soccer, so this revelation would fit right in with his public image. And third, he’s been dead for about a year, so it’s not as if he’s going to come out and fight for his innocence. The ploy didn’t work, however, probably because no one believes Grondona would be so incompetent as to allow any copies of the tell-tale letter to survive.

So Blatter was forced to step down, although he will stay in power until a new election takes place sometime between December and March. He has not said whether he will support a specific candidate in that election (and if you think an endorsement from Blatter would be the kiss of death, then you don’t know FIFA very well), just that he will not seek re-election at that time. And what is he going to do in the meantime? He says he wants to use his lame duck status to push through some meaningful reforms, like term limits for elected officials and increased financial transparency. This is all well and good until you consider that he’s been reneging on promises not to run for another term for a good decade now, and that during his stewardship FIFA treated any request for financial clarification from a member association as high treason.

So who’s got next on the FIFA throne, and what does it mean for world soccer? The NYT had a pretty nice article on likely candidates, but really it’s anybody’s guess.

Jordan is making a move to have Prince Ali bin Al Hussein (the loser in last week’s election) installed as President without a new vote, which is exactly what an organization that has serious transparency and corruption issues should be doing right now, right? Come on, guys. I know you’re upset that your boy lost, but like it or not this next election needs to be a big tent kind of affair. Hussein’s problem is that he is seen as a friend of Europe, and say what you will about Blatter, he cemented his power base by chipping away at UEFA’s power and handing it out to less powerful nations in Africa, Asia and North America. That’s why those blocks will vote Blatter no matter what. As much as Blatter’s European critics try to paint the situation as a corrupt cabal that bought their support with handouts and bribes, that’s not what actually happened. FIFA has always been shady. The change that Blatter brought about was from a corrupt organization dominated by one constituency (Europe) to a corrupt organization dominated by a different one (not Europe). The English FA and its brethren can yell all they want about returning honor to the game, but what they’re really upset about is that the new wave of politicians found their way into someone else’s pocket.

And that’s the issue: FIFA is not pool of guppies with a few sharks thrown in; everyone in it is some type of shark, and the odds of all of them coming together to establish an honest system of governance are slim to none. El Bolso is overjoyed that someone finally put FIFA’s feet to the fire, but a few years from now we may find ourselves missing ol’ Sepp and saying things like “well, he was corrupt, but at least he spread it around.” Maybe not; maybe we’re living in a new world, one in which exposure is such that shady backroom deals become difficult if not impossible. Don’t bet on it though. The devil always finds a way. In the meantime, let’s celebrate this small, shining atom of beauty in the middle of the rancid mud that is FIFA politics.