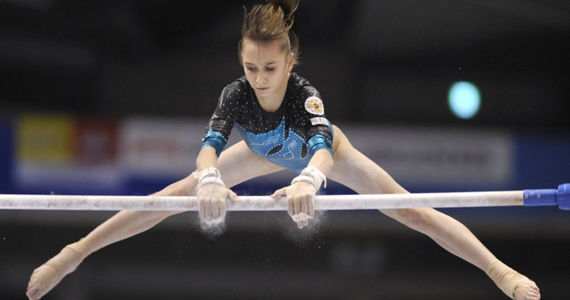 Hockey Girl is back, but this time she’s talking Olympics! She previews the women’s gymnastics event.

I’ve been a sucker for gymnastics since I was a little girl. Growing up, two of my closest friends were sisters who were heavily involved in the sport (one now coaches part-time). I can still name every member of the 1988 team, and was heartbroken when a freak deduction cost them a medal (thanks a lot, Rhonda Faehn). I openly cried when they won team gold in Atlanta, and was supremely pissed when mistakes cost them the gold in Beijing (yeah, I’m looking at you, Alicia Sacramone).

So, of course, I am insanely excited about what’s about to unfold at the 2012 Olympics. From supposed favorites to teams just hoping they don’t implode in front of a global audience, here are a few of the storylines (and predictions) for the team competition in London.

Romania, one of gymnastics’ most successful programs, has had a rough decade. A series of scandals including allegations of abuse and the dismissal of the entire national team—not once, but twice, made them a near joke in the sport. Why get rid of the athletes, you might ask? Well, Romania’s gymnasts also had difficulty keeping their clothes on, with several of them appearing topless or fully naked in men’s magazines. The rest of the girls committed a far worse sin—eating real, solid foods, which led the federation to decry their “fat and lazy” behavior (I swear, that was the official cause). All of this negative press led to the resignation of longtime national coach (and arch villain) Octavian Belu, who pretty much caused all the abuse and acting out to begin with.

However, in 2010 Romania did the unthinkable, re-hiring Belu and his coaching partner/wife Mariana Bitang in the hopes that they could return the team to its former glory. Few thought Belu could pull this off, but it looks like the maniacal man may have the last laugh. Romania could very well play spoiler in the team competition, even if the country hasn’t managed to produce a halfway decent performer on the uneven bars since the days of Nadia (also known as the ’70s). But their gold medal chances took a bit of a hit with the recent injury to rising star Larissa Iordache, who was expected to contribute on all four events and was a dark horse favorite in the all-around competition.

The reigning gold medal team has learned a pretty harsh lesson these past four years—Puberty’s a bitch.
China’s long suspected (sometimes proven) skirting of the sport’s eligibility rules has come back to haunt them. Faced with increasing scrutiny, they have been forced to use girls who are—gasp—of legal age!! The horror!! No more little pixies that barely reach the height of the balance beam. No more viewer debates along the lines of, “Um, I’m pretty sure that girl still has her baby teeth.”

The results have not been pretty. It’s not unusual for a few members of a national team to have some “growing” pains, but when every one of your gymnasts suddenly sprouts several inches and pounds but is still being asked to do skills that were specially designed for them because they were of an illegally small size, stuff can go really wrong, really fast.. They have two returning gymnasts, including He Kexin, one of the girls involved in the Beijing age controversy. At this point, she’s somewhere between 8 and 20 years old, who knows really? For China, London could either be a surprise comeback, or it could be a sad splatfest. Total toss-up. But look for them to make serious noise in the individual events later in the Games.

Get ready to hear this word approximately 1.64 trillion times. No, really, you’re going to hear it a lot. Why? Because everyone who’s anyone is bringing an Amanar to London—and if you’re not, well then you might as well stay home. So, you might ask? What the hell is an Amanar? It’s the single most difficult skill being done in women’s gymnastics, a vault named after its creator, former Romanian gymnast Simona Amanar. It’s a round-off onto the board, followed by back handspring onto the vault, then two-and-a-half twists in the air…all topped off with a completely blind landing. It’s insanely hard—and carries a big possible score. As you might expect, the past two or three years vaulting has turned into all Amanar, all the time. The Cold War might be over, but the Amanar arms race is in full force.

So, what’s the problem? The problem is that 75% of the girls who are trying this vault simply shouldn’t be. They don’t have the speed, power, or height to successfully–and safely–land it. Things have gotten pretty scary out there. For every beautifully done, technically clean version there are a dozen girls who, could very easily find themselves doing serious, long-term damage to all sorts of body parts. What’s irritating is that there are slightly less difficult (and way less scary) vaults that they could be doing instead that, if done well, would bring in almost as high a score. But, due to coach/team pressures and/or personal pride, most of them would rather have a poorly performed, physically dangerous Amanar than a good anything else. Hopefully nothing goes wrong.

Russia is looking for redemption. After failing to even medal in the team competition in Beijing, they’ve got a huge chip on their teeny, tiny little shoulders. And redemption may come in the form of two very different gymnasts.

Aliya Mustafina burst on the scene in 2010, dominating every meet. The consensus was that this was the girl to beat in London, with everyone else gunning for second place. But at the 2010 European championships disaster struck when she blew out her knee in the team competition. How did she hurt herself so badly? By trying an Amanar, of course. See! I told you this vault was dangerous!!! Many wrote her off, assuming she could never return to form in time. Mustafina, however, is the latest in a long, long line of determined Russian gymnasts, who refuse to go away quietly. Yes, I love me a borderline bitchy, Russian diva. She’s not the same gymnast she was before that damned Amanar, but she’s still better than almost anyone else in the world and she thinks you ought to know that. Girl is gunning for respect.

Then there’s her teammate (and biggest rival) Viktoria Komova. While Mustafina was on the sidelines, Ms. Komova showed up and stole her crown as the darling of the gymnastic world. She’s got an insane skill set and that typically elegant Russian style. What she doesn’t have, it would seem, is any semblance of mental toughness. I swear, the first time I saw her compete I thought she would burst into tears if anyone so much as looked at her the wrong way. Right now, she’s the best in the world, but you’ll want to hold your breath during every routine. Yes, it’s a five-person team, but as Komova goes, so goes Russia’s chances for gold. No pressure sweetie, really!

I will forever love the Magnificent 7, the gold-medal winning team from Atlanta. Love them. But based on pure talent, this 2012 blows the 1996 squad out of the water. They’re not particularly graceful or even pretty to look at sometimes, but man are they powerful, with no glaring weakness. Reigning world champion Jordyn Weiber seems to be peaking at just the right time, Aly Raisman is as steady as they come, Gabby Douglas’ potential point value is one of the highest in the world, Kyla Ross brings a bit of elegance and McKayla Maroney brings…The Amanar. Remember all those negative things I said about the Amanar? I take it all back when it comes to Maroney. Her version of this vault is not only the best one currently being done; it’s likely the best that has EVER been done. It’s simply beautiful, and is the sole reason Maroney is even on this team—it’s that good.

But—there’s cause for concern. This is a young, fairly inexperienced squad. Ross is a first-year senior, and Douglas has been known to flake out in the past. When she’s on, she’s magnificent; when she’s not…yikes. If nerves and mistakes pop up early for this group, it could all unravel pretty fast. News this week that Maroney has aggravated an old injury is also worrisome. As of now, she’ll still do vault, but her potential score may be lower than expected.

However, I still think this is the U.S.’ competition to lose. Even with a lower score from Maroney, they still have the advantage on vault. Thanks to Douglas and Ross, they’re closer to Russia on uneven bars then many thought they could be. They’re solid, if not terribly creative on balance beam. And Raisman and Weiber have two of the most powerful floor routines in the world. If they hit, they win, and will forever become known as the Fabulous Five.

Anything can happen, and I wouldn’t get the Wheaties box ready just yet, but I think it goes USA-Russia-Romania